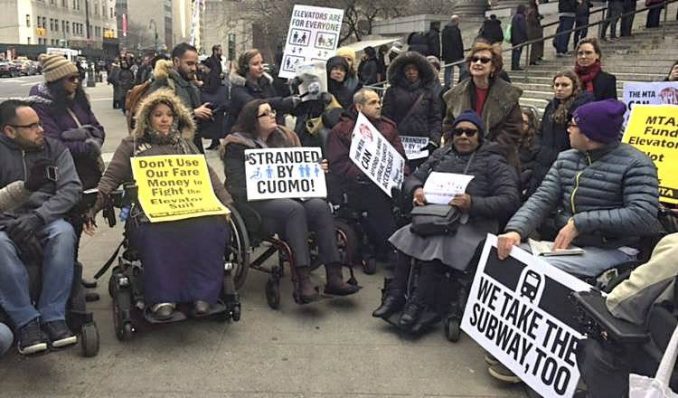 Led by the Center for Independence of the Disabled, New York, several individual plaintiffs and other disability rights’ organizations joined forces March 5 to sue the Metropolitan Transportation Authority, New York City Transit and the city of New York for elevator access to each and every subway station in the city.

Of the 472 stations, currently only 110 have elevators, making New York’s transit system the least accessible in the entire nation. In addition, the rate of repair of broken elevators is abysmal, so not all 110 stations are usable at any given time. An average of 25 elevators break down each day. Not all subway lines that go through a station are accessible. For instance, a wheelchair user cannot get on the 4, 5 or 6 trains at the busy Union Square station in Manhattan, despite the fact that the station itself is accessible.

The court hearing on March 5 was preceded by a rousing 9 a.m. rally and press conference co-sponsored by Rise and Resist, CIDNY, the People’s MTA and Diversability, in front of the 60 Centre St. courthouse. Speaker after speaker denounced the lack of access to the city’s subway system. Wheelchair users are directly affected, but so are parents with strollers, disabled children going to school, seniors, riders struggling with heavy packages, workers with an injury who have to use crutches or other assistive devices, and workers who are just plain tired.

The MTA has also reduced the number of litter baskets on the platforms because they cannot be easily emptied by MTA workers when there’s no elevator to carry heavy bags up to the street. This was done at the height of a campaign against litter, which causes track fires.

Shouts of “Accessibility Is a Right!” echoed throughout the area. Susan Dooha, executive director of CIDNY, said that lack of subway accessibility is “one of the top two barriers to employment for people with disabilities.”

Following the rally, activists moved upstairs to the packed courtroom, which was standing room only. Three wheelchair users had to be seated in the so-called well, a portioned-off section of the courtroom where lawyers sit.

Activists held up copies of the New York Daily News so the judge could see the headline of the lead editorial, “Let Them Ride.” The paper, not generally regarded as disabled friendly, appealed to a basic notion of fairness: “All they want is the same lousy service we all enjoy.”

The MTA legal team spoke first, trying with various legal maneuvers to get the lawsuit dismissed. Among their arguments, such as that the MTA is a state agency and the city does not have jurisdiction, they said the MTA was not opposed to putting in more elevators. It just had to prioritize where to spend its money: signal upgrades or elevators. The MTA lawyer’s actual words were: “Let’s say you decide to install 100 elevators. Then there won’t be resources for signal upgrades.”

In a report following the hearing, the subway activist group the People’s MTA addressed this directly: “What a disgusting, transparent attempt to pit riders with disabilities against other riders. And the fact is, multiple exposes have shown that the MTA is already spending a paltry amount on signal upgrades.

“A recent New York Times expose showed that the big emergency Subway Action Plan allocates only 9.5% of its operating budget to signals. This was supposed to be the plan that fixed the subway and stopped all those frustrating delays.

“Another Times article, this one from December, noted that debt service to the banks amounted to $82 a second — which adds up to $7 million a day, $2.6 billion a year.”

Two women lawyers for the disabled organizations, one in a wheelchair, countered the MTA’s jurisdiction argument, saying the NYC Human Rights Law of 1995 applies. They quoted a legal decision holding that the law should be interpreted broadly and a decision on a similar case in Boston. That case, settled by a conference between the two parties, specified a timeframe for all Boston subway stations to be accessible.

Justice Shlomo Hagler interrupted frequently, asking the MTA lawyer to “speak from the heart” rather than read from a script. He also admonished the MTA for its failure to maintain an up-to-date transit system in New York City, which he called “the economic engine of the country.” He also decried the bad impression the unreliable system had on tourists.

Hagler said it wasn’t fair that the subways were not 100 percent accessible and told the MTA to spend its money more wisely.

The hearing concluded with the suit still in place. Judge Hagler ordered a settlement conference before making major decisions in the case. Monica Bartley, outreach organizer for CIDNY, said she was “cautiously optimistic.”