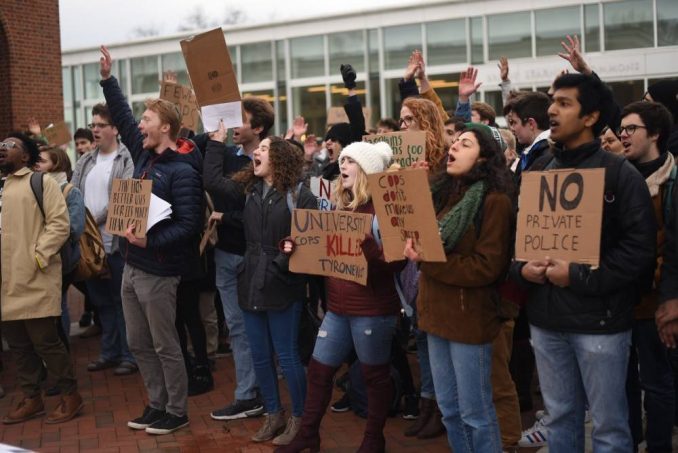 Johns Hopkins University President Ronald J. Daniels sent an email to students on March 5 detailing the school’s path to “establishing a university police department, specifically trained to meet the unique needs of a university environment.” Sen. Joan Carter Conway has proposed a bill in the Maryland Legislature — spearheaded by the Johns Hopkins administration — which would allow private universities in Baltimore to institute their own private police forces.

This news was met with enormous opposition by students, many of whom view the creation of a private university police department as a way to further entrench white supremacy on campus — and endanger Black, Brown, queer and trans students, and community members. This news follows the announcement that Melissa R. Hyatt, the former Baltimore Police Department head of Homeland Security, would be named head of security for Hopkins’ undergraduate and medical campuses.

The Baltimore Police Department has a long history of racial profiling and unrestrained brutality against Black and Brown people. The creation of this private police force would only serve to increase these attacks on oppressed people.

Johns Hopkins University has also been the primary engine driving gentrification and displacement in Baltimore through the school’s “Live Near Your Work” program for faculty and staff. This has led to displacement of working-class Black and Brown Baltimoreans from their neighborhoods, such as Remington — which is directly south of the university’s Homewood undergraduate campus — and areas in East Baltimore, which are directly adjacent to Hopkins’ medical campus. The university is systematically gentrifying and encroaching upon these neighborhoods.

Because this private police force would “strengthen public safety in and around our campuses,” as university President Daniel’s email states, areas of Baltimore bordering the campuses would be patrolled by police with even less accountability to them than the corrupt Baltimore Police Department.

The university has a history of not paying its workers a living wage. Cafeteria and sanitation workers, security guards and the school’s other subcontracted workers receive unjust, low salaries and are quite often forced to live in poverty because of these unlivable wages. If the school has enough money to create, hire, train and pay an entirely new police force, then it surely has sufficient funds to pay a living wage to its subcontracted workers.

For these reasons and many more, university students say this decision is dangerous and irresponsible. So they formed a coalition called Students against Private Police, comprised of a variety of student groups, including the Black Student Union and leftist, environmental and LGBTQ organizations.

SAPP organized its first action on March 8 — a rally on a busy spot outside the university’s main library. Speakers from many student groups, as well as community activist Rev. C.D. Witherspoon, talked about why this initiative would be disastrous for Hopkins and the Baltimore communities. Students carried handmade signs with slogans like “Not Tryna Get Shot!” ”More Community, Fewer Cops!” “Who R U Here to ‘Protect’?” “Cops Don’t Make Us Safer!” and “Pepper Spray Me!”

Following the rally, students chanted while marching through Gilman Hall, one of the busiest study spaces on campus. They made their way to President Daniels’ mansion, where they expressed their anger by chanting outside his front door. Over 100 students participated, as well as some influential members of community organizations.