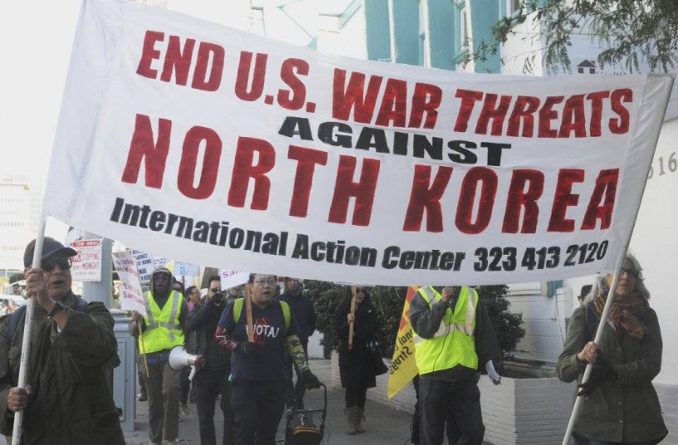 After two days of direct talks in Pyongyang between representatives of both north and south Korea, the south issued a statement on March 6: “The North Korean side clearly stated its willingness to denuclearize. It made it clear that it would have no reason to keep nuclear weapons if the military threat to the North was eliminated and its security guaranteed.

“The North expressed its willingness to hold a heartfelt dialogue with the United States on the issues of denuclearization and normalizing relations with the United States. It made it clear that while dialogue is continuing, it will not attempt any strategic provocations, such as nuclear and ballistic missile tests.”

As of this writing, there has been no public comment yet from the Democratic People’s Republic of Korea in the north confirming or denying this view of the talks. Therefore, what we say here is only preliminary.

Let us assume that the statement from the south is generally correct. What does this mean for the anti-war movement in the U.S.?

This paper reported on demonstrations, meetings and leafleting in five cities last week on the theme “Hands off Korea!” in which Workers World Party participated. These were modest events, but they had an impact and showed it is possible to get out publicly and defend the DPRK despite the avalanche of vicious attacks by the entire establishment media.

But considering the open threats of nuclear war coming from both the White House and the Pentagon in the last year, it is astonishing that there has been no larger response by anti-war forces.

Hopefully, this will change. It should now be very clear that the war danger does not come from the DPRK. For three-quarters of a century, the U.S. has claimed that its military occupation of south Korea and its huge war “games” every year, simulating an invasion of the north, were meant to “protect” the people of the south. This fiction was exploded when athletes from north and south marched together under one flag and were wildly cheered at the PyeongChang Olympics last month.

All along, the DPRK has said that its nuclear program is meant to defend the country, as a deterrent against a U.S. attack. As long as the U.S. claims it needs to keep — and now upgrade — its nuclear arsenal of 7,000 warheads for “defense,” then the DPRK is a thousand times more justified in having its own deterrent of a few dozen bombs.

However, it is now being reported that the DPRK is willing to discuss with the U.S. how to defuse the tense situation that exists, including the issue of denuclearization.

But such talks will only be possible if the U.S. is willing to discuss ending its “war games,” signing a peace treaty and bringing its troops home from south Korea.

The ball is now in the court of the U.S. The movement here needs to take this situation very, very seriously. Every effort will be made by the war hawks in Washington to ratchet up sanctions and threats against the north in order to block north-south efforts at reconciliation.

“Hands off Korea” should be a top priority in the growing struggle against imperialist wars, being waged around the globe.