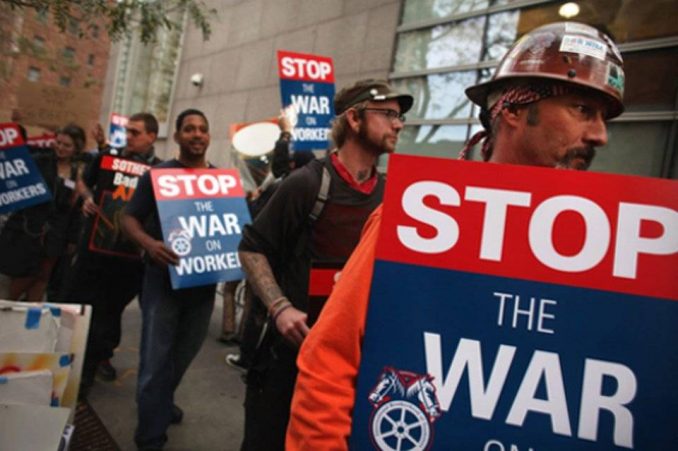 Teamsters in New York City’s Joint Council 16 voted Sept. 13 to become a “sanctuary union.” A third of its 120,000 members are immigrants. Now, staff and workers are being schooled on their rights under U.S. law. Applying the principle, “Union solidarity first, immigration status second,” the Consortium for Worker Education walked a class through the difference between an administrative warrant and a judicial one. Under the Fourth Amendment, only a judicial warrant allows authorities to search a home or business or make an arrest.

A key part of the training is how to bargain future contracts that contain clauses forcing employers to follow proper procedures before granting federal authorities access to a worksite. The training also includes information on what workers should do if stopped while driving or approached at home.

The Teamsters’ decision to openly challenge Trump’s draconian deportation practices came after the loss of one of its members. Eber García Vásquez, 54, a married father of three U.S.-born children, was detained on Aug. 24 when he showed up for a routine appointment. Despite no criminal record and two pending green card applications, García was whisked back to Guatemala on Oct. 6. (OTPL, Workers World, Oct. 12)

Teamsters JC16 posted Jan. 23 on @sanctuaryunion: “We are getting letters from all over the country cheering our decision to become a sanctuary union. Thanks for all the support!” Union solidarity forever!

Chapters of Restaurant Opportunities Centers United held #NotOntheMenu rallies and actions Feb. 13 demanding an end to sexual harassment in the restaurant industry. ROC’s slogan for its National Day of Action was “Restaurant workers face the worst sexual harassment of any industry — and we’ve had enough!”

To reinforce their demands, ROC issued a booklet on Feb. 12 titled “Better Wages, Better Tips: Restaurants Flourish with One Fair Wage.” Of 6 million tipped workers in the U.S., ROC reports that “the vast majority [are] women and disproportionately workers of color.” Under an antiquated, unjust federal law, workers in 43 states can be paid as little as $2.13 an hour. “As a result, tipped workers live in poverty and depend on food stamps at rates twice that of the general population.”

Statistics show that in seven states that have adopted OFW, sexual harassment is lower, as are poverty rates, especially for workers of color, while wages are higher, and employment rates and industry growth are equal or higher.

Chants of “We move this city!” and “No justice! No peace!” rocked Atlanta on Feb. 14 as more than 70 mostly African-American Metropolitan Atlanta Rapid Transit Authority paratransit drivers staged a one-day strike. Members of Amalgamated Transit Union Local 732 were protesting MARTA’s outsourcing and the increasing neglect of the buses, which hurt riders with disabilities, elderly riders and the drivers.

Stanley Smalls, ATU executive board member, told the Feb. 14 Atlanta Journal Constitution that MARTA does nothing to upgrade its aging fleet: a wheel fell off one of the decrepit buses during a recent trip and exhaust fumes sicken passengers.

MARTA outsourced the paratransit services to MV Transportation in 2016. “The goal of these private transportation companies is not to improve transit service [but] boost their profits,” said Local 732 President Michael Majette in an ATU statement. “They do that by gutting transit service for seniors and people with disabilities, cutting corners on safety, and beating down the working people who provide this important service. This is about the civil right of all residents and visitors of Atlanta to safe, reliable and affordable public transit without regard for their age or disability.”

A mighty U.S. labor network — the San Francisco Labor Council, chartered in 1893, with over 150 unions representing more than 100,000 union families — is the latest to call for freedom for political prisoner Mumia Abu-Jamal. In a resolution passed unanimously on Feb. 12, the SFLC demanded Philadelphia’s District Attorney Larry Krasner, as well as Gov. Tom Wolfe, release all police and prosecutorial files related to Mumia’s case.

This resolution, noteworthy since it is from a major U.S. labor organization, also documents international labor’s longtime support for Mumia: from Britain’s largest union, UNITE, the International Dockworkers Union; and Doro-Chiba, the Japanese railway union; to the National Union of Metalworkers of South Africa, the largest union in South Africa, among others. Read the full SFLC statement at tinyurl.com/sflcmumia/.