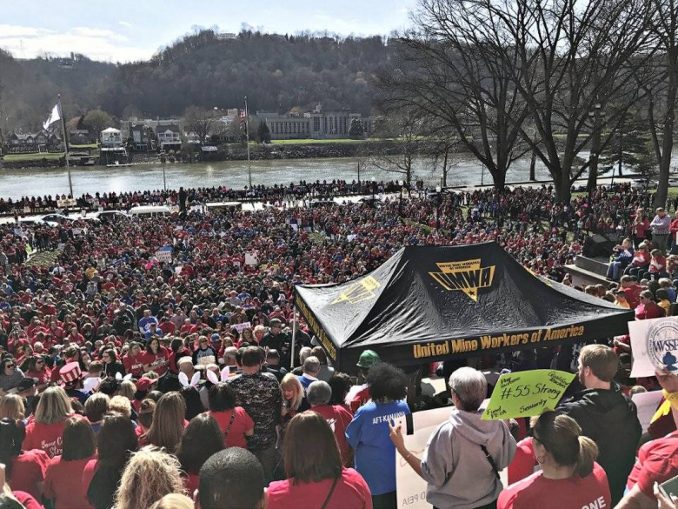 West Virginia teachers and education workers rally during their historic strike, in the state capital of Charleston, Feb. 26.

West Virginia education workers were still out on the picket lines on March 1, continuing their historic statewide strike for better wages, as well as improved, less expensive health care. West Virginia ranks 48th in the U.S. for teacher wages — that is, teacher wages are lower in only two other states. The strike began on Feb. 22.

Schools remained closed in each of the 55 counties in the state, with determined teachers and school service personnel out on militant picket lines in their communities. The three unions representing the workers in the negotiations are the American Federation of Teachers-West Virginia, the West Virginia Education Association and the West Virginia School Service Personnel Association.

A deal proposed by Gov. Jim Justice to “settle the strike” was designated as “tentative” by union leaders as it was sent to the state House and Senate for approval. The governor offered a one-time 5 percent pay raise to education workers. He did not offer a “fix” for the beleaguered Public Employees Insurance Agency, but instead proposed a “freeze” on premiums for a few months only and a “taskforce” to find more funding sources.

On Feb. 28, the House approved the 5 percent pay raise. But on March 1, the intransigent, right-wing Senate proposed taking away the pay raise and using that money to supposedly “fix” the health insurance plan. The legislature appears to be believe workers will fall for this kind of vanish-the-money as if it’s a magic trick. But this capitalist fakery is only making workers angrier.

The striking workers have stayed solidly united under the slogan #55Strong. The governor had to back away from pushing through right-wing, anti-worker bills that cancelled teacher seniority, promoted charter schools and denied unions the right to payroll dues deductions for their members. These types of bills are part of a national anti-union campaign, funded in part by the far-right billionaire Koch brothers.

Throughout the day on Monday, Feb. 26, the governor, who owns over 50 companies, campaigned for his proposal with statewide meetings at high schools in Wheeling, Martinsburg and Morgantown. But when he used insulting, anti-worker terms to describe the teachers, he fanned the flames of anger in West Virginia workers fed up with big business exploitation.

The multinational, majority-women, rank-and-file union members, in militant motion and finding the governor’s proposal to be too little and too late, strongly wanted to have more say in the terms of the deal. So on Wednesday, Feb. 28, the strike was not “settled.” Workers continued on picket lines with shouts of, “We’re not letting anybody cross this line!” Some who voted for Trump and Republicans in the last election now pointed to betrayal by the rich, shouting, “Make ‘em pay in May!” when election primaries are held. (USAToday, March 1)

Despite state law declaring strikes illegal, these workers know their West Virginia labor history. The Battle of Blair Mountain in 1921 in Logan County was the largest labor uprising in U.S. history, with some 10,000 armed coal miners confronting 3,000 police and strikebreakers. Throughout the 20th century, the United Mine Workers was a mighty force to be reckoned with, while wildcat strikes were common everywhere in the state, including thousands during the 1970s.

On Thursday, March 1, the education workers defiantly entered the second week of their “illegal” wildcat strike by staying out again in all 55 counties. One education worker told WW that the majority of people striking want big business to take the brunt of the funding for their health and salary, with Big Oil in West Virginia taxed at a higher rate.

In addition to the dangers to their health and livelihoods posed by the depredations of Big Oil in the state, workers are increasingly preyed upon by Big Banking. Research from the state’s 2018 Executive Budget Report states: “The percentage of each citizen’s income allocated to payment of state debt to the banks and financial institutions is 2.8 percent or $1,020 per citizen.”

The teachers and education workers are in a historic struggle. They have the benefits of union solidarity. The structure of a union offers combat assistance, as well as resources and organizational communication at the state and local level. Unions enable members to connect and move militantly from the ground up.

The West Virginia workers on strike have fought to have a union, and now they are also fighting to make their unions fight.

Fighting for the union

Phil, demonstrating at the Capitol building in Charleston on March 1, and a worker active in his union, shared these thoughts with WW:

“There’s been lots of anti-union talk from ultra-left and conservatives.

Folks need to fight within their unions, to make them more progressive and class conscious. We need to radicalize and transform unions from within at the local level.

“Some believe the association leaders are negotiating directly with the governor. It’s really the legislators striking the deals and selling out the workers. These politicians have the interests of energy companies and private capital.

“The struggle of education workers and teachers, it is a class struggle for social justice, a social struggle against racism and capitalism and against austerity. We hope to build the idea of class consciousness, through the participation of local unions. When people drop out of unions, we don’t build class consciousness. Hopefully, after this struggle, people will continue to participate and strengthen and radicalize their unions.“

Despite whatever failings in upper-level union leadership, the union is not the enemy. The capitalist class and the billionaire business owners are the enemy!

The whole world is watching this historic battle in the class war against workers and oppressed people. Power to the rank-and-file union members now directing their burning anger against the vicious abuses of the capitalist system!