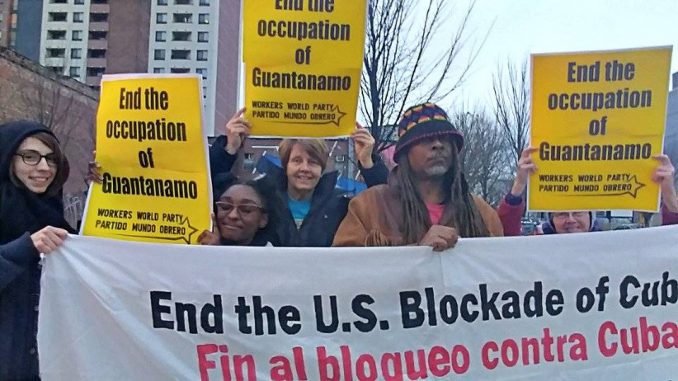 Since 1959, Cuba has called for the return of the 45 acres occupied by the U.S. in Cuba’s eastern Guantánamo province. Coordinated international actions amplified Cuba’s demand by marking the Feb. 23 anniversary of the 1903 “lease.” The 1903 agreement allowed the U.S. to use the land and harbor, first for a U.S. military coaling station. It has been a major U.S. naval base in the Caribbean, and since the aftermath of the 2001 invasion of Afghanistan has been the site of a notorious prison where alleged terrorists are tortured.

The Coalition to Close U.S. Foreign Bases (noforeignbases.org) initiated the coordinated activities with a unanimous resolution at its January conference. The call was welcomed and supported by the Cuban Movement for Peace and Sovereignty of the Peoples (MovPaz) and the National Network on Cuba. Actions took place in Berlin, Germany; Vancouver, Canada; and in Chicago; New York City; Baltimore; Boston; Hartford, Conn.; Tucson, Ariz.; and Albany, N.Y., in the U.S.

Meetings, educational street actions, plus a national teleconference organized by Black Alliance for Peace and a twitter storm initiated by the U.S. arm of the International Committee for Peace, Justice and Dignity marked the date. Many activities used the 37-minute video, “All Guantánamo Is Ours,” to bring the voice of the Cuban people affected by the U.S. occupation into the gatherings.

Josefina Vidal, lead Cuban negotiator with the U.S. during the period leading to the re-establishment of diplomatic relations and now ambassador to Canada, tweeted: “#Guantánamo Is Ours: According to the Cuban Constitution, the Republic of #Cuba repudiates and considers illegal and null treaties, pacts or concessions concluded in conditions of inequality that ignore or diminish its sovereignty and territorial integrity.

“Therefore, the 1903 treaty that led to the occupation of a portion of the territory of #Cuba by the #USNavalBase in Guantánamo is illegal and void. That’s why we say: #USOutofGuantanamo.”