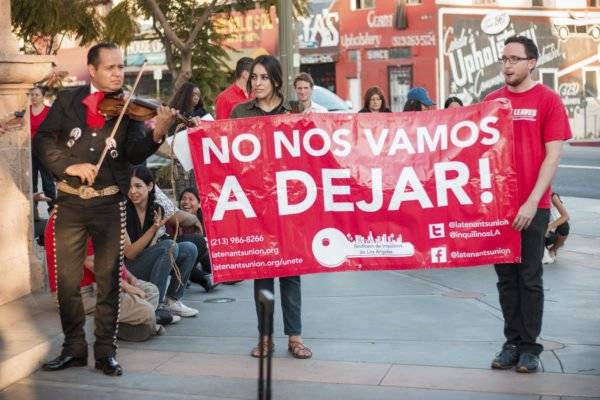 Residents of the East Los Angeles neighborhood of Boyle Heights are savoring a rent-strike victory organized by a group of tenants. The Mariachi rent strike forced a rich real estate developer to sign the first-ever collective bargaining agreement between tenants and a landlord in Los Angeles.

About half the tenants in the 24-unit building are Mariachi entertainers. They moved there to be near Mariachi Plaza, where these traditional performers gather to get paid gigs.

Real estate developer Frank BJ Turner purchased the building with a plan to spike the rents of five to seven tenants at a time, each step giving him more leverage over the remaining tenants. Turner quickly demanded rent increases of 60 to 80 percent on seven apartments. He named the building “Mariachi Crossing” to exploit the culture even as he aimed to drive people out.

During the Bill Clinton administration a plan was initiated to demolish federal housing projects and build smaller, single-family dwellings. A group of Boyle Heights women known as “Mothers of the Projects” blocked the bulldozers at three different housing projects. They demanded that the replacement housing be provided to neighborhood residents — at affordable rents — and they won.

More mothers joined and they became “Unión de Vecinos,” Union of Neighbors. They have been fighting for the rights of Boyle Heights tenants ever since.

Recently investors bought art galleries and apartment buildings in Boyle Heights. Apartment rents are rising. Low-income people are being forced out. Galleries that formerly featured local artists are being replaced by showrooms selling artwork for sometimes tens of thousands of dollars.

Activists have disrupted “art tours” and protested gentrification. Unión de Vecinos has gained community esteem. Fernando Ramirez, an East L.A. resident, staff organizer for the United Electrical Workers and a tenant rights organizer, told Workers World: “We don’t want corporate art, we have our own art. None of these galleries has connections with our community. And there’s nothing wrong with homes being fixed and updated. But there’s a saying in the struggle: Your luxury won’t be our displacement!”

Gentrification and spiking rents are plaguing all of LA, and working-class people have been fighting back. In 2015 the Los Angeles Tenants Union was formed and began opening chapters in different neighborhoods. Unión de Vecinos founded the Boyle Heights LA Tenants Union. The seven tenants who were suddenly facing unaffordable rent increases in early 2017 contacted the union.

Their outreach emphasized their connection to Mariachis, the beloved icon in this Mexican community, and to expose the name and face of Frank BJ Turner. Other tenants joined the campaign and posters appeared all over the building. Social media got the word out widely.

When Turner refused to meet, they kept up the pressure, calling a rent strike that lasted nine months. Each month they paid their pre-increase rent to Turner and put the increase in an escrow account. After returning the checks for two months, Turner began accepting them, while still demanding increases.

‘See you at your house’

Some 75 to 100 tenants demonstrated at Turner’s Beverly Hills office and then at his home in the lavish Rancho Park neighborhood. Clearly rattled, Turner’s office finally agreed to a meeting — if the tenants would just call off a planned demonstration. Although he wanted to meet only one tenant at a time, he finally agreed to meet a committee. After his lawyers offered practically nothing, the organizers walked out, saying, “See you at your house!” which they did.

Turner’s lawyers asked the tenants to stop protesting at his house, but still wouldn’t offer anything. A second demonstration at his home was larger and drew other chapters of the LA Tenants Union.

Even some of his Turner’s wealthy neighbors brought food to the picketers, and the local media again covered the story extensively. Turner’s office offered deals to individual tenants, but no one broke their unity.  Later in November, activists showed up at his home a third time — but this time they pitched tents on the sidewalk, and Mariachis performed late into the night.

In early December, Turner’s office came to the bargaining table and the tenants won.

Ramirez explained the agreement that Turner was forced to sign: “Of the nine months of extra rent withheld during the strike, the tenants were allowed to keep six months. The rent would increase by 14 percent, but each year after, the increase can only be 3.5 percent. When the agreement expires, Turner is legally obligated to negotiate again, which was something his lawyers opposed from the beginning. And maintenance of the building is in the contract.”

Ramirez added: “We try to always link the immigration struggle with our tenants’ rights struggle, because Immigration and Customs Enforcement is driving people out and that makes the neighborhood even more vulnerable to these corporate thieves.

“When they knock down a building and put up a new one, we want the rents to be appropriate for the median income of the people who live in the neighborhood so the same kind of  tenants can move back in. We want to negotiate five-year contracts that spell out the limits on rent increases and to always have maintenance as part of the agreement.”

Currently rent strikes are happening or being planned in four more Los Angeles neighborhoods, with a combined count of about 400 rentals.