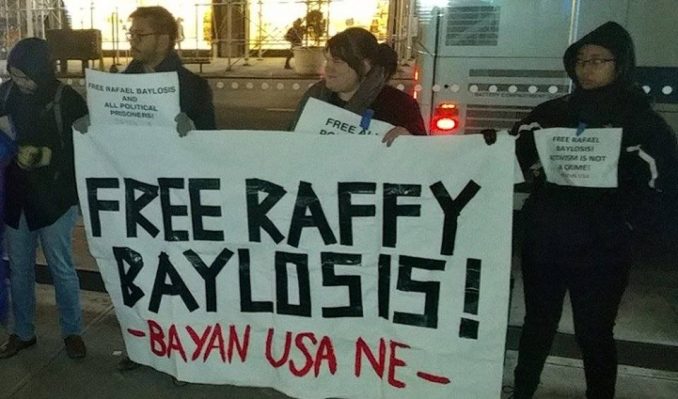 Filipino organizations and their allies rallied outside the Philippines Consulate in New York City on Feb. 5 to demand that the U.S.-backed Duterte dictatorship in Manila release Rafael Baylosis and over 486 other political prisoners. Despite the bitter cold, protesters loudly chanted,  “Never, never, never again to martial law!” and “Free Raffi now!”

Baylosis, popularly known as “Ka Raffi,” was an adviser to the National Democratic Front of the Philippines during peace negotiations with the government of President Rodrigo Duterte. However, the government abruptly cut off these talks in November.  Baylosis was arrested on Jan. 31.

Leaders of anti-Trump protests in the Philippines during the Association of Southeast Asian Nations Summit in November have also been targeted for arrest. Militant demonstrations denounced the U.S. president’s presence at the summit.

BAYAN USA called the New York action as part of Philippines Solidarity Week, which marks the anniversary of the Philippine-American War in 1899, when U.S. imperialism seized the archipelago. Rally speakers noted that the week coincides with the beginning of Black History Month, and they stressed the role of rebelling African-American soldiers who joined the Filipino resistance in that war.

The protest was also joined by activists from People’s Monday, a weekly anti-police-brutality action, which dedicated its event to Baylosis. Everyone marched together to Times Square.