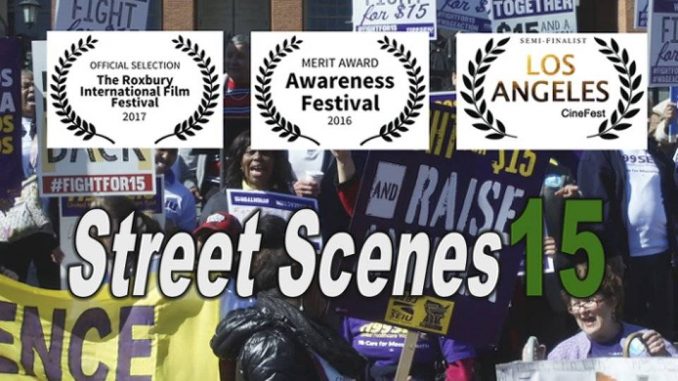 A dynamic meeting on workplace organizing took place Jan. 28, as members and friends of the New York branch of Workers World ­Party enjoyed a showing of “Street Scenes/15.” This exciting 20-minute film documents the power­ful, multinational Fight for $15 and a union movement in Boston during 2014-16 (available at filmourwayfilms.com).

A panel discussion afterwards featured filmmakers Bob Lamothe and Yvonne Lamothe. Sue Davis, an editor of WW’s “On the Picket Line” column, commented on trends in the labor movement, stating that workplace battles have been uplifted and influenced by the Black Lives Matter movement since the Ferguson uprising. An experienced incognito field organizer filled the audience in on how to expose divisive, union-busting methods that bosses spend millions to perpetrate. Administrators of the social media project Labor Against Racist Terror encouraged folks to spread the word about union and workplace efforts that oppose racism and white supremacy.

Other struggles raised by the panel included the People’s MTA, which fights for 100 percent accessible transit, free of police harassment of riders and workers; the heroic Florida prison strike; the ongoing strike against media giant Spectrum; racist Immigration and Customs Enforcement raids at job sites like the 7-Eleven stores; and more.

In addition to asking questions about the film’s content, people raised resourceful examples of how to get workers who are unemployed or underemployed, not in unions or not all in the same union to join together; how to assist coworkers in demanding their rights; and how to get existing unions more active in community issues.

Participants agreed that campaigns to raise the minimum wage must extend to those excluded from the 1938 Fair Labor Standards Act for the purpose of super exploitation: people with disabilities, prisoners, farm workers, domestic workers, sex workers and tipped workers.

The consensus of everyone present was to hold monthly gatherings focused on workplace organizing that — like this one — combine culture, theory and practice, as we approach May Day 2018.