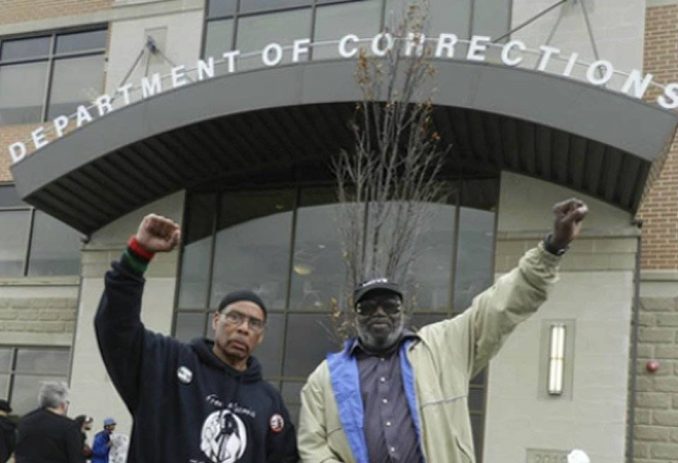 Kamau Becktemba and Razakhan Shaheed at a protest at the Pennsylvania Department of Corrections headquarters in Mechanicsburg in 2014. The protest was for healthcare for political prisoner Mumia Abu-Jamal.

The Pennsylvania Department of Corrections is threatening to censor Workers World newspaper from being read by over 300 prisoners in the state system.

The immediate reason given in the DOC’s Jan. 29 letter is that “information contained on pages 1 and 6 calls for action that may advocate criminal activity within the correctional facility.” The title of the offending article by J. White in the Jan. 18 Workers World issue was “Fla. prisoners launch strike against slave labor.” (tinyurl.com/y8f4ntw8)

The DOC letter states that the Jan. 18 WW issue is being denied to inmate Julio Ortiz (FC8863) at State Correctional Institution Coal Township, near Shamokin, Pa.

State officials are giving Workers World 15 working days to appeal the denial. If the denial is not overturned, the Jan. 18 issue will not only be refused to Ortiz and other prisoners, but also Workers World will be placed “on the statewide reviewed publication list as ‘denied’ and it will be banned from all inmates in the Department of Corrections.”

Four issues of WW were denied to Pennsylvania prisoners in 2017. This time, the DOC is escalating its threat by planning to ban all issues of Workers World to all prisoners.

The DOC was forced to overturn its decision to ban the Aug. 31, 2017, issue of WW after a social media and press campaign urged readers to send letters and make phone calls to the DOC. (tinyurl.com/yb8br2xs)

As a result of the social media campaign, the DOC uncensored that specific issue. But it denied Workers World’s demand that each prisoner be awarded $50 for being refused the time-sensitive publication.

The DOC complaint charges that Workers World “advocates and lists demands for prison strike.” As is this newspaper’s right under the First Amendment, the Jan. 18 WW article does indeed list the demands of the heroic prisoners on strike that week in at least 17 Florida DOC locations. These demands were:

“1. Payment for our labor, rather than our current slave arrangement

“3. Reintroducing parole incentives to lifers and those with ‘Buck Rogers’ dates. (fighttoxicprisons.org)

“Along with these primary demands, we are also expressing our support for the following goals: 1) Stop the overcrowding and acts of brutality committed by officers through the FDOC. 2) Expose the environmental conditions we face, including extreme temperatures, mold, contaminated water and being placed next to toxic sites. 3) Honor the moratorium on state executions. 4) Restore voting rights as a basic human right to all.”

The Florida prisoners’ strike and their demands were reported in newspapers all over the world. Workers World articles on that event have as much right to be read by prisoners as any other newspaper or magazine, and especially so because its articles are written by activists in that people’s movement.

WW urges all readers, activists, writers and reporters to send complaints to Department of Corrections, 1920 Technology Parkway, Mechanicsburg, PA  17050, as well as 717-728-2573 and [email protected]