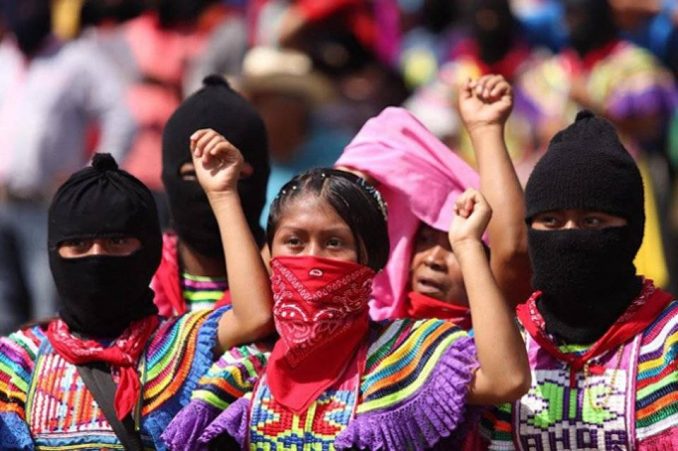 María de Jesús Patricio Martínez, escorted by two women, spoke to massive crowds during a six-month 2017 process through which Indigenous communities nominated her as their candidate for president of Mexico.

This year’s presidential campaign in Mexico is already making history, no matter the outcome.

María de Jesús Patricio Martínez, an Indigenous woman supported wholeheartedly by the Zapatista National Liberation Front (EZLN) is running for president of Mexico. (Reuters, Oct. 2017) The elections will take place on July 1 of this year. The EZLN campaign could not come at a better time, as the struggles for Indigenous rights as well as against misogyny rightfully take center stage the world over.

Martínez, popularly known as Marichuy, is the spokeswoman for the National Indigenous Congress (CNI), the political wing of the EZLN. Marichuy was selected to be the group’s candidate in May 2017. The process of Marichuy’s selection took six months, as Indigenous communities were first consulted about whether to support a candidate in the presidential elections.

Marichuy of the Nahuatl people is originally from the state of Jalisco in western Mexico and is an herbal medicine healer. She has worked in the CNI for over 20 years.

Two representatives of the Indigenous movement in Mexico spoke at a New York City meeting on Jan. 20 as part of a U.S. tour to gain support for the EZLN and the CNI. Lucila Bettina Cruz and Francisco Grado Villa, representing the CNI, testified to the dire need for Indigenous people to have a voice in Mexico after decades, indeed centuries, of oppression and exploitation by the dominant class. They called for the entire movement to unite and get stronger because capitalism is wrecking the planet and peoples’ lives.

The two also participated in the Jan. 20 Women’s March in New York City and issued a statement calling on “all Mexicans, Latinx, and im/migrants to march” with them in the massive demonstration. 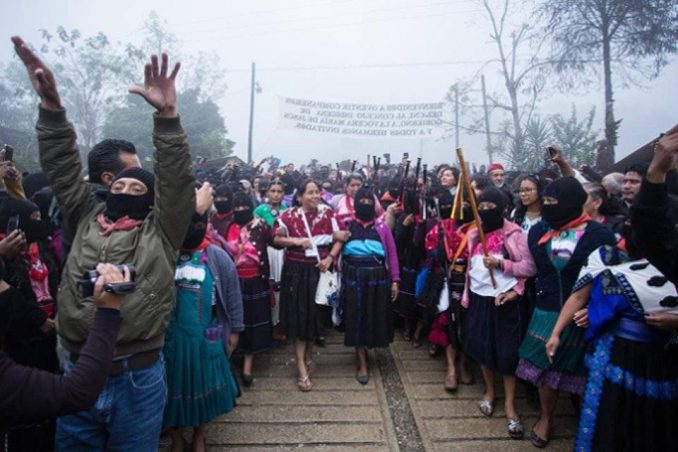 Supporters of María de Jesús Patricio Martínez. Popularly known as Marichuy, she is the spokeswoman for the National Indigenous Congress, the political wing of the Zapatista National Liberation Front (EZLN).

When the EZLN opened an anti-capitalist movement

The EZLN burst onto the world scene on Jan. 1, 1994, making a declaration of war on the same day that the dreaded NAFTA (North American Free Trade Agreement) came into force. That day, the sight of Zapatista Indigenous women and men in armed gear and covered faces deeply inspired those in Mexico and in the world fighting against oppression.

The EZLN’s declaration shook the ruling classes from Wall Street to Mexico as well, and was a key element in a spreading movement against capitalist globalization.

Despite difficulties, the Zapatistas have persevered in their organizing, especially in southern Mexico, and have created schools, health centers and other important services for the Indigenous communities of Chiapas and elsewhere. Their participation in the 2018 Mexican presidential election demonstrates to the powers-that-be that, far from disappearing, the EZLN is still a force to be reckoned with.

The Marichuy campaign is clear that it is not running to support the system fraught with corruption but is, indeed, against that system. The Zapatistas and the CNI released a joint statement after their May 2017 meeting: “The Time Has Come.”

It reads in part: “We do not seek to administer power; we want to dismantle it from within the cracks, from which we know we are able. We trust in the dignity and honesty of those who struggle: teachers, students, campesinos, workers and day laborers, and we want to deepen the cracks that each of them has forged.”

The Mexican political scene is in turmoil and not just because the Zapatistas are running. The traditional bourgeois parties are in chaos, caught between a rock and hard place.  On the one hand, white supremacist U.S. President Donald Trump takes every opportunity to bash Mexico and its migrants, declaring that a wall on the southern U.S./northern Mexico border will be built to halt the tide of “criminals.”

But on the other hand, the current Mexican president, Enrique Peña Nieto, a pro-capitalist member of the ruling elite, is not able to defend his country’s reputation or even its nationalism. Under his administration, 43 students from a rural teachers’ college in Ayotzinapa were “disappeared” in 2014 on their way to a political demonstration, with strong suspicion that national and state police were responsible. The case garnered worldwide news and exposed the thoroughly repressive nature of Mexican society. 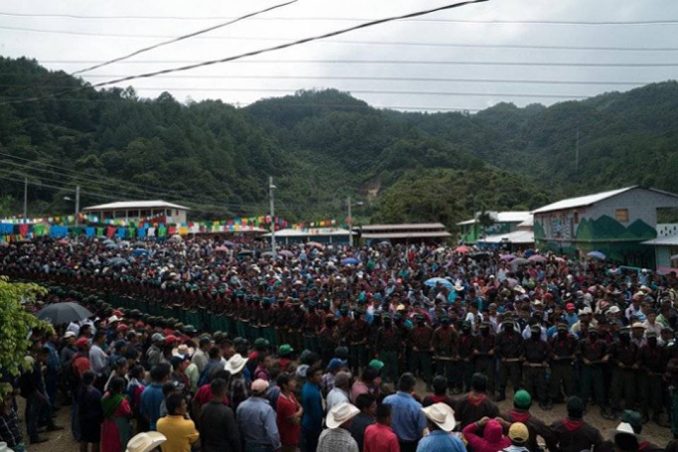 Thousands received Marichuy in La Garrucha, in the state of Chiapas, during her 2017 campaign.

Repression made in Washington

Mexico is widely characterized in the mainstream press as a violent society.  But it is U.S. imperialism that promotes, trains and funds violence and repression in Mexico, in the drug industry, so lucrative for U.S. banks that it will not be ended. The cartels may be Mexican, but imperialism benefits the most from the profiteering in illegal drugs.

And it is Washington that funds violence and instability in Mexico through policies like Plan Mérida, described on the U.S. State Department website in this way: “The Mérida Initiative is an unprecedented partnership between the United States and Mexico to fight organized crime and associated violence while furthering respect for human rights and the rule of law. … The United States has a partnership with the Government of Mexico to disrupt organized criminal groups, institutionalize reforms to sustain the rule of law and support for human rights, create a 21st century border, and build strong and resilient communities.”

The U.S. Congress has appropriated a whopping $2.5 billion to this “initiative” — a tremendous amount of money that could be used for health care and education in the U.S. or to deal with the effects of unemployment in Mexico because of NAFTA.

The money is earmarked “to fight organized crime” but, in reality, it cultivates organized crime. Cartel crime not only destabilizes the country, but is used to stifle protest and resistance. The violence — the beheadings, the torture, the missing students — are all made in Washington.

Almost 30,000 homicides occurred in Mexico in 2017, according to Mexican government data. A Jan. 25 NPR report noted: “More than a decade after Mexican soldiers deployed in the streets and mountains to fight a U.S.-backed drug war, Mexico has something to show for it: more killings than ever,” the highest number of homicides on record.

Journalists who report on the government corruption or who attempt to expose the collusion between the cartels and the government are especially targeted. The Committee to Protect Journalists points out that 42 journalists were killed in 2017 worldwide and six of those were in Mexico, making the country third after Iraq and Syria. (AP, Dec. 22, 2017)

Reporters Without Borders puts the number higher, at 11 journalists killed in Mexico.  And Mexican groups say even that number is too low. In fact, the numbers gloss over the tragedy. For example, one reporter was “gunned down while attending a Christmas party at his son’s elementary school.” (NPR, Dec. 22, 2017)

In the case of Miroslava Breach, a correspondent for the progressive national newspaper La Jornada: “Gunmen shot her in her car … with one of her three children sitting next to her. At the time, reporter Javier Valdez, one of Mexico’s most acclaimed chroniclers of the country’s drug war, defiantly wrote about Breach’s killers. ‘Let them kill us all, if that is the death penalty for reporting this hell, No to silence,’ he wrote. Less than two months later, Valdez was pulled from his car and murdered … just blocks from the offices of his newspaper in Sinaloa. No one has been charged in the case of either Breach or Valdez.” (NPR, Dec. 22)

This U.S.-made violence is especially affecting women. One publication states that seven femicides a day occur in Mexico. (Vice, Nov. 2017) The murders of women have been linked to the intensification of the drug war by many media and government sources.

The Guardian writes that of the more than “50,000 killings of women since 1985, nearly a third took place in the last six years.” At one of Marichuy’s events in Chiapas she stated, “Women are the ones who feel the deepest pain due to murders, disappearances and imprisonments committed in the country.” (Dec. 14, 2017)

She continued: “But it’s precisely because we are the ones who feel the deepest pain … the greatest oppressions, that we women are also capable of feeling the deepest rage. And we must be able to transform that rage in an organized way to go on the offensive to dismantle the power from above, building with determination and without fear, the power from below.” (Vice, November 2017)

Marichuy’s campaign will be traveling throughout Mexico to get support. Her tour will end in Tijuana, Mexico, on Feb. 18 and will have a binational gathering at the Peace Bridge there for Mexican and U.S. supporters.

It does not matter if Marichuy wins the election or not. What her campaign reflects is that women and Indigenous people are no longer sitting idly by while the powers-that-be, especially monied men of European descent, are destroying both human society and the planet.

Marichuy’s campaign is providing a platform not only for women, LGBTQ people and migrant workers, but especially for the Indigenous people of Mexico, whose voices will no longer be silenced.