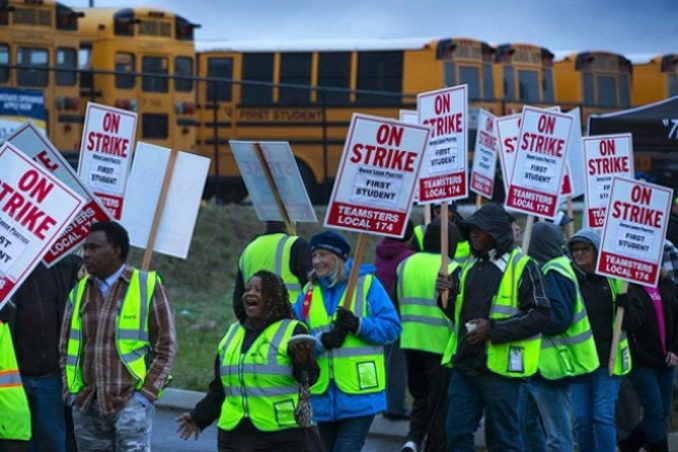 Feb. 5 — Over 400 Seattle school bus drivers, members of Teamsters Local 174, went on strike against First Student, the giant global school bus contractor, on Feb. 1.  They are still out as of today, buoyed by strong labor and community support.

School bus operations for the city’s public schools have been mostly shut down.  Large numbers of drivers are picketing at two First Student bus yards. Dozens of Teamsters who drive recycling trucks and other drivers have honked their solidarity while driving out of their yard at South Park in the mornings.

Local 174 members held a one-day strike on Nov. 29. The drivers voted down by 85 percent First Student’s disrespectful contract offer in a packed meeting on Jan. 6.

The strike is protesting woefully inadequate health care benefits and retirement plans. Only 7 percent of drivers — those who work at least 30 hours weekly — qualify for the current health care plan, which is still expensive for them.  First Student’s recent proposals offer no real improvement.

The company is the largest school bus contractor in North America and operates 44,000 buses in 1,000 school districts with 50,500 employees.  The Seattle School Board balked at paying $1.7 million more to cover health care for the remaining drivers, as it is already paying $27 million a year for its contract with the company. First Student could easily afford to include all drivers in the current health care plan without passing along further costs to the district.

The 5,000 teachers of the Seattle Education Association voted to stage a half-day walkout on Feb. 7, and will join the Teamster drivers on their picket lines. “The bus drivers are who the kids see first thing in the morning, so that kind of sets the tone for how they come into school. … We want to make sure that they are healthy and have a secure retirement,” says SEA President Phyllis Compano. (Seattle Weekly, Feb. 2)

Sebrena Burr, president of the Seattle Council Parent Teacher Student Association, asserts. “They can afford to pay health care and retirement [benefits] for these people and they’re choosing not to.” (clicklancashire.com, Feb. 3)

City Council members Kshama Sawant and Teresa Mosqueda, as well as parents with their children, have joined the picket lines. Supporters are bringing food, coffee, heat and solidarity to the strikers.