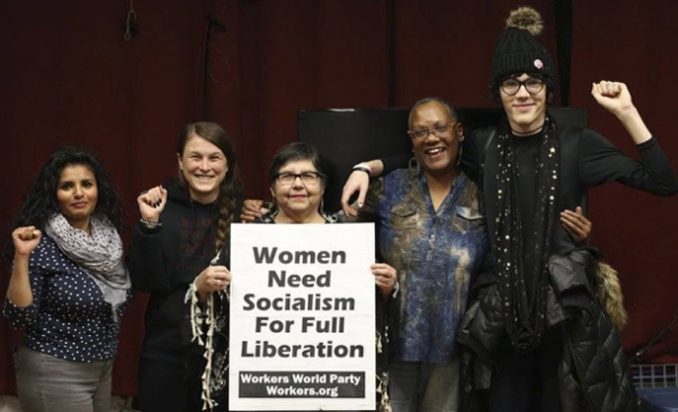 “Women and the Fight for Socialism” was the theme of a forum held on Feb. 3 in New York City sponsored by the New York branch of Workers World Party. The following questions and more were discussed.

In this period of mass resistance by women against sexual harassment, misogyny and sexism, the question looms large of how to end women’s oppression. How can we take the recent victories against sexual predators and serial sexual assaulters further? How can working-class and trans women benefit from the progress made in Hollywood and by other more privileged sectors?

How can the women’s movement unite with trans women to fight against this extra oppression and build unity between ciswomen and transwomen?  How do other forms of oppression like white supremacy intersect with sexism?  What advancements have been achieved by women in socialist Cuba and the Democratic People’s Republic of Korea?

Opening remarks were made Workers World Party members. Monica Moorehead reviewed the issue of “Violence against women at Michigan State University – isolated or systemic.”  Cosmia Bohannan-Blumke addressed the “Fight for Trans Liberation.” Julie Varughese reported on “Women’s status in the DPRK,” and Teresa Gutierrez summed up with a talk on “Women in Cuba show how socialism is the only solution to end women’s oppression.”  Taryn Fivek chaired the meeting. To view these talks, go to tinyurl.com/y7dkt5uf/.

Women’s oppression is the oldest oppression of all, rooted in the origins of class society.  It is a complex and intricate web that is inculcated in every facet of life. It permeates every single part of society. Sexism exists in the boardroom and the bedroom, in the office and in the fields, in Hollywood and at McDonald’s.  It can only end when we end capitalism.