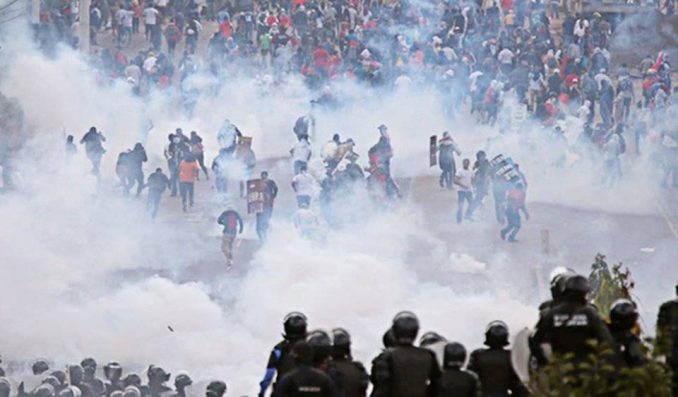 The rich supporters of the U.S.-backed president of Honduras, Juan Orlando Hernández, watched his Jan. 27 swearing-in ceremony at the national stadium in Tegucigalpa, the capital. JOH claimed a second term based on a widely disputed Nov. 26 electoral process.

Thousands of cops and military units kept tens of thousands of opponents from coming closer than a half-mile from JOH. Hundreds of meters from the stadium, demonstrators threw stones at a bus carrying supporters of the president. The police drove forward with armored vehicles and used tear gas. In San Pedro Sula, the second largest city of Honduras, around 10,000 people took to the streets. The police used tear gas, water cannons and live ammunition against protests across the country.

The opposition Alliance Against the Dictatorship considers JOH’s Nov. 26 re-election a fraud. On Jan. 27, Salvador Nasralla, presidential candidate for the Alliance, demanded new presidential and parliamentary elections and said the protests would continue.

At a rally of Hondurans and supporters in New York City on Jan. 27, one of the demonstration’s organizers, Carlos Hernández, told Workers World: “Since Nov. 26 the cops and military have officially killed 30 people who were demonstrating. The people’s movements say this number is really about 60, and that many of the people are uncounted, as their families remove their bodies and bury them to avoid drawing the government’s attention to the family and bringing down more repression.”

When asked about reports soon after the Nov. 26 election that some units of the military were refusing to enforce a curfew, Hernández said, “Yes, these were special units, like the Tigers and the Cobras and the traffic police, at a time when it was undecided even on top who won the election. The people’s movements were able to establish contact with some units of police at that moment, and this contact continues, which can be good in the future.”

Pro-U.S. regimes in Honduras since 2009 have presided over a massive increase in murders of ordinary people and popular organizers like environmentalist Berta Cáceres.

Military and police repression continues. The Facebook site Alianza de Oposición USA D19 contains short videos of current confrontations between popular demonstrations and repressive forces. One shows a man being shot by the military and bleeding in the street.

In Tegucigalpa, police used tear gas against Nasralla’s supporters on Jan. 26 when they drove hundreds of cars and motorcycles through the city, honking in unison against the election manipulation.

Former President Manuel Zelaya, who was overthrown by a U.S.-backed military coup in 2009, told the media on Jan. 27 that Honduras is heading for a “popular uprising.” Zelaya added, “We are ready to fight to enforce the will of the people.” (Junge Welt, Jan. 29)