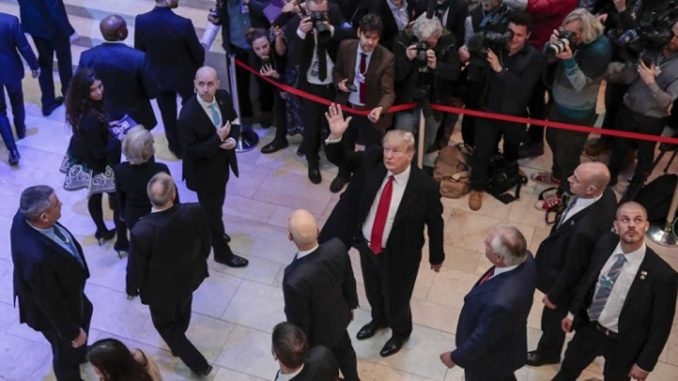 His speech at Davos was an attempt to partially get back into the imperialist fold without backing away completely from his super-power, reactionary, nationalist arrogance. It is dawning on the Trump grouping that he has weakened the entire imperialist camp.

Jan. 29 ― Donald Trump, the racist, bigoted, authoritarian, right-wing chief executive of U.S. imperialism, who is despised by the workers and oppressed masses of the world, was operating on several fronts last week.

Trump went to Davos, Switzerland, to attend a gathering of billionaires and millionaires. The representatives of the European ruling class there played to his ego, flattering him and treating him like an emperor.

At the same time that he was hobnobbing around Davos, rubbing shoulders with fellow members of the ruling class, Trump’s two immigration hawk henchmen, Chief of Staff Gen. John Kelly and adviser Stephen Miller, were in Washington working on his proposed draconian, punitive immigration bill, which has been denounced by the immigrant movement as a “white supremacist” hostage bill.

As Trump deplaned in Davos, he was confronted by charges, corroborated by numerous news sources, that he had illegally tried to have Special Counsel Robert Mueller fired last June. His reply: “Fake news.”

Yet the European bankers gave Trump the royal treatment, taking their cue from the Saudi princes who provided a string of musicians to play for him as he entered the conference hall. He was praised by the corporate financiers for his tax cuts and deregulation, which sent their stock prices soaring. Corporate Europe organized a dinner for him with the heads of the top 15 European corporations.

Their goal was to placate Trump enough to keep him from launching an attack on the European imperialists, the European Union and NATO ― customary punching bags for his chauvinist, imperialist arrogance. In this, they largely succeeded. Trump stuck to a mild, 15-minute speech drawn up by his handlers. But he was booed when he went off script and denounced the “lying press.”

Trump took personal credit for the rise in the stock market and the tax cuts. Undoubtedly the parasitic European bondholders were elated. Trump’s key line was “America is open for business,” aimed at enticing European investors to cash in on low tax rates and minimal regulation.

His speech was a muted attempt to partially get back into the imperialist fold without backing away completely from his super-power, reactionary, nationalist arrogance. He tried to assure the audience that “America first does not mean alone.”

It is not that Trump has had some inner conversion from his great-power chauvinism. Rather it is dawning on the Trump camp that by breaking the U.S.-European alliance, he has weakened the entire imperialist camp on both sides of the Atlantic, especially the U.S. side.

The Pentagon needs NATO, along with German and French imperialism, in its struggle to subordinate Russia and to complete the conquest of Ukraine. The Pentagon and the State Department need the collaboration of French and British imperialism in Africa, where both former colonial powers have deep roots. And Trump needs the cooperation of European imperialism if he hopes to undermine the Iran nuclear treaty.

Neither camp is able to deal with the state-planned, socialist side of China’s economic, commercial and diplomatic expansion. China is steadily progressing with its One Belt One Road project to establish an international network of railways, roads, pipelines and utility grids linking China with Central Asia, West Asia and parts of South Asia.

In a concession, Trump even spoke about the possibility of re-engaging with the Trans Pacific Partnership ― a sure sign that the weakness of Washington and the strength of China are beginning to sink in.

And as the Trump administration edges closer and closer to war with the Democratic People’s Republic of Korea, and potentially with China and even possibly Russia, it will need the backing or at least the neutrality of European imperialism.

Neither imperialist camp ― the U.S. or Europe ― is capable of dealing with the oppressed and the working class of the world without the other. Neither camp is capable of reining in the inter-imperialist antagonisms or of keeping a war from breaking out that could destabilize the capitalist, imperialist system. Trump, of course, may revert quickly to his old arrogance. But, for the moment, that is what accounts for Trump’s “moderate” behavior at Davos.

Before going to Davos, Trump announced he had a proposal that would solve the Deferred Action for Childhood Arrivals crisis by giving a path to citizenship for 1.8 million Dreamers and for people eligible to be Dreamers but who had never signed up. These young immigrants would get a so-called path to citizenship over a period of 12 years.

However, the Trump proposal, called the Dream Act, also demands $30 billion for his border wall. And it would sharply curtail family reunification immigration, a major component of legal immigration, by excluding the parents of Dreamers from any legalization. It also shuts down the system that each year allows some 55,000 people from all regions of the world to get visas to enter the U.S. on a lottery basis.

The White House proposal would limit family sponsorship to spouses and minor children. It would eliminate a number of existing categories, including adult children, both married and unmarried; parents of adult U.S. citizens; and siblings of adult U.S. citizens. Experts have estimated that cutting these categories would reduce the roughly 1 million green cards given out yearly by 25 to 50 percent.

A document obtained by CNN goes into more detail: “The framework [of the bill] could allow detaining individuals indefinitely as they await deportation for months and years ― something that has been curtailed as the result of constitutional concerns from courts. The proposals could also vastly expand the definitions of criminal offenses that could subject an individual to deportation.” (Jan. 26)

The immigrant rights movement and representatives of the Dreamers have denounced the Trump proposal, refusing to put other immigrants at risk in order to get a bill for themselves.

Greisa Martinez Rosas, advocacy director for United We Dream and a potential beneficiary of the Dream Act, commented: “Let’s call this proposal for what it is: a white supremacist ransom note. Trump and Stephen Miller killed DACA and created the crisis that immigrant youth are facing. They have taken immigrant youth hostage, pitting us against our own parents, Black immigrants and our communities in exchange for our dignity.

DACA-recipient Juan Escalante, in a release from America’s Voice, wrote: “It’s no secret that Miller, along with Gen. John ‘Adult in the Room’ Kelly, has been penning some of the most heinous immigration policies coming out of the White House. One might even wonder if Miller and Kelly, not President Donald Trump, are running the government from the sidelines ― exploiting Trump’s short attention span. …

“What the White House is selling the American people is nothing but a nativist wish list that would reduce the number of immigrants, especially people of color born in countries that Trump considers ‘shitholes.’” (Jan. 26)

Inside the Davos meeting hall, Trump was besieged with questions about how he tried to fire Special Counsel Robert Mueller, who is leading a criminal investigation into Trump’s relationship to Russia and his financial connections to the Russian oligarchs. Trump branded the charges as “fake news.”

But according to the New York Times of Jan. 26, Trump ordered his attorney, Don McGahn, to fire Mueller last June. McGahn, fearing his own criminal liability, refused the order. The number of witnesses interviewed led even Fox News to confirm the story.

The story has been the subject of endless network talk shows, news shows and the capitalist press.

The thrust of the discussion is that the attempted firing of Mueller fits in with Trump’s efforts to get FBI head James Comey to go easy on National Security Adviser Michael Flynn. When Comey refused to do so, Trump fired him.

The anti-Trump moderates and liberals are going over and over the various possible legal violations, procedural violations, violations of protocol, etc., that Trump has committed.

However, they won’t fight him politically for his racism, his misogyny, his militaristic jingoism, his threats of nuclear war, his anti-immigrant chauvinism, his support for voter suppression, etc. When they talk about undermining “our democracy,” they always refer to the Russians allegedly interfering with the elections. But they do not bring up the most serious interference with capitalist democracy: voter suppression.

Millions of African Americans, Latinx, Native people and poor whites have been kept from voting because of photo ID laws, redistricting to reduce the weight of the vote in poor neighborhoods and urban areas, shutting down polling stations, disqualifying people with felony convictions, etc.

All the bourgeois commentators keep referring back to the resignation of Richard Nixon, who faced impeachment over the Watergate break-in. But so far Trump has given no indication that he would honor bourgeois legality. Furthermore, the House of Representatives is far to the right, and it is the House that would be charged with initiating impeachment proceedings.

These commentators and the Democratic Party leadership repeat over and over again that Russia tried to “subvert our democracy.” Whatever Putin did or did not do, the democracy in this country is a very restricted version of capitalist democracy. The capitalist class has access to all the levers of government, communications, and the powers of the state. It is their democracy. What democratic rights exist for the workers and the oppressed within this suffocating capitalist system have been fought for, often with blood, for generations.

African Americans have fought for civil rights. Labor unions have fought for workers’ rights. Women have fought equality. So has the LGBTQ community, from the uprising at Stonewall to all the battles that followed. Immigrants have battled against deportations, disabled people have struggled for accessibility, and so on.

Class-conscious workers should not fall for this phony pro-war investigation of Russia to get leverage against Trump. What we need is a massive movement to push back the entire right-wing Trump agenda and challenge the cops, ICE and the FBI who are oppressors of the people.

We do not benefit when one faction of the ruling class removes another faction if the masses sit idly by.