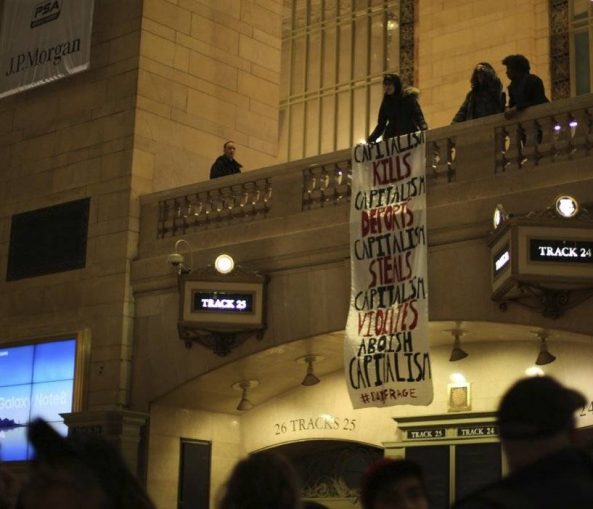 New York — Hundreds of anti-racist demonstrators marched from Times Square to Hell’s Kitchen here on Jan. 20 to confront white supremacists and misogynists celebrating the one-year anniversary of President Donald Trump’s inauguration. The venue information was made available to the public only two hours before the event started. The host of the event, who had two venues cancel on him in the run-up to the event, was only able to secure a dingy corner of the West Side Highway.

An event intended as a celebration of white supremacy and toxic masculinity soon assumed a new tenor, as attendees found the building surrounded by a coalition of dedicated anti-fascists chanting, “Nazi scum! Off our streets!”

It was just one victory in a string of victories during the Days of Rage (#DaysofRage), inspired by the growing resistance in Palestine. From Martin Luther King Jr. Day to the one-year anniversary of the Trump inauguration, militant actions took place across the U.S., with at least 16 in New York. These salvos against the ruling class opposed the reactionary Trump administration’s endless attacks on working-class and oppressed people.

One year into a nightmare regime of deportation, repression and warmongering, the Democratic Party has done nothing to protect us. Instead, they hope that Trump’s crimes will amount to a victory for their party at the midterm elections. There are hundreds of thousands of migrants facing deportation, millions in prison held to slave labor, millions who do not have access to health care, housing, food security, etc., who cannot wait for midterms, cannot wait until 2020 and cannot rely on the Democratic Party, which has done nothing but betray them.

The resounding message of the Days of Rage was: We don’t have to live like this. Only independent peoples’ struggle, not the Democratic Party, can provide genuine resistance.

Days of Rage kicked off with the Dr. Martin Luther King Jr. March & Rally Against Inequality, Racism, Sexism, Fascism and War in Newark, N.J., organized by POP. Among many other issues, the Jan. 15 march through downtown Newark raised the struggle against police brutality at home and imperialist war abroad, referencing King’s passionate but often ignored opposition to the Vietnam War.

Every Monday for the past two and a half years, NYC Shut It Down has organized a Black Lives Matter protest known as People’s Monday, in which the story of a different Black, Brown or Indigenous person killed by the state is told. On King’s birthday, NYC Shut It Down and its supporters marched through Harlem, telling the story of King’s assassination. Police attempted to violently suppress the protest, arresting three marchers. The action defiantly continued and ended with jail solidarity at a nearby precinct for those arrested.

On Jan. 15, Martin Luther King Jr. Day, activists organized a rally in  Columbus Circle here to show solidarity with striking Spectrum workers — members of Local 3 of the International Electrical Workers, who have been on strike for nearly 10 months, since March 28.

Florida prisoners began a strike that day demanding an end to prison slave labor, among other demands. When Dr. King was assassinated in Memphis, Tenn., he was supporting a strike of Black sanitation workers for decent wages and union recognition.

Thousands of New Yorkers, overwhelmingly Black and Brown, are arrested every month because they cannot afford subway fare, leading to jail time and even deportation. An action at the 3rd Avenue and 149th Street subway station in the Bronx raised awareness of these racist arrests and offered commuters free entry to the subway system.

The action, organized and led by Bronxites for NYPD Accountability (Why Accountability) as part of the ongoing “Swipe It Forward” campaign, encouraged commuters with unlimited subway passes to use them to swipe another rider in when leaving the subway turnstiles. By swiping forward, which is completely legal, New Yorkers can reduce opportunities for the racist New York Police Department to harass, ticket and arrest riders unable to afford the ever-increasing subway fare.

The People’s MTA held a speakout and rally at NYC’s Union Square raising the lack of accessibility in New York’s subway system. The action raised four demands: 100 percent accessibility; defend transit workers against attacks by the bosses and the media; cops out of the subway; and reduce the fare to $0 — make Wall Street pay!

On MLK Day, Samidoun: Palestinian Prisoner Solidarity Network held its weekly afternoon rally here protesting Israeli detention of Palestinians. This rally of dozens focused on Ahed Tamimi, the 16-year-old Palestinian recently jailed for resisting Zionist occupation of her homeland. Chants of “From the river to the sea, Palestine will be free” and “Not another nickel, not another dime, no more money for Israel’s crimes” were enthusiastically received by passersby.

On Jan. 18, Guevaristas for the Revolutionary Empowerment of Black and Latino Society (G-REBLS) took to the streets and subways here to distribute literature detailing the crimes of U.S. imperialism in Puerto Rico, Honduras, Yemen and Palestine.

Later that day, the International League of Peoples’ Struggles held a demonstration in Union Square against U.S. wars and imperialism. The demonstration demanded “U.S. out of everywhere!” and raised struggles against imperialism in Palestine and the Philippines. For more about this demonstration, see tinyurl.com/y9ocxsuw.

On Jan. 19, the Haitian community and its supporters marched early in the morning to protest Trump’s most recent racist invective toward Haiti and African nations. The march was led by the 1804 Movement for All Immigrants, a newly formed anti-imperialist, Haitian-led coalition.

The Committee to Stop FBI Repression held a public forum at the Solidarity Center here on Jan. 16 to discuss recent police repression, including updates on legal proceedings against activists arrested at last year’s J20 counterinaugural demonstrations in Washington, D.C., and against activists in Durham, N.C., who pulled down a white supremacist statue in August. CSFR shared tactics and strategies to defend the movement from police repression to a packed room. For more about this meeting, see tinyurl.com/y9wbo8qp.

The Sackler family has made billions off opioid painkiller OxyContin, legally killing thousands, while the “War on Drugs” has imprisoned millions of Black and Brown people for selling or possessing small amounts of recreational drugs. The demo called for the Met to return money donated by the Sacklers and for the Sackler fortune to be distributed as reparations to those whose lives have been ruined by OxyContin.

On the morning of Jan. 18, the Metropolitan Anarchist Coordinating Council organized a Rally Against Rapist Cops and All Cops outside of Brooklyn Supreme Court to support Anna Chambers, an 18-year-old woman raped by two NYPD officers. People’s pressure is essential to win convictions in this case: The judge is Danny Chun, who let off killer cop Peter Liang without jail time two years ago.

That evening, Workers World Party held a forum at the Solidarity Center on Women and the Fight Against Capitalism and Imperialism. Speakers raised the leadership of women in struggles against imperialism in Honduras and the Philippines and distinguished Marxist feminism, which sees patriarchy as a foundational component of capitalism, from bourgeois feminism, which sees it as a mere complicating flaw.

A contingent organized by Samidoun: Palestinian Prisoner Solidarity Network mobilized for the NYC Women’s March on Jan. 20 to demand freedom for Palestinian freedom fighter Ahed Tamimi. Near the end of the march route, WWP and the People’s Power Assembly distributed literature and held signs. Slogans included “Justice for Sandra Bland,” “End Police Murder of Black Women” and “Time’s up for Patriarchy, White Supremacy and Capitalism.”

After the Women’s March, Days of Rage culminated in a Rally Against Trump and Capitalism in Grand Central Station. Two large banners were unfurled from a balcony over the station. One of them read, “Capitalism Kills, Capitalism Deports, Capitalism Steals, Capitalism Violates. Abolish Capitalism!” Speakers raised a wide range of peoples’ struggles and the need for a broad movement against Trump independent of the Democratic Party.

The rally ended with a march to Times Square and then on to Hell’s Kitchen to confront the white supremacist gathering. One thing is for sure: White supremacist misogynists like Mike Cernovich, Gavin McInnes and Stefan Molyneux will think twice before meeting openly in New York City again.