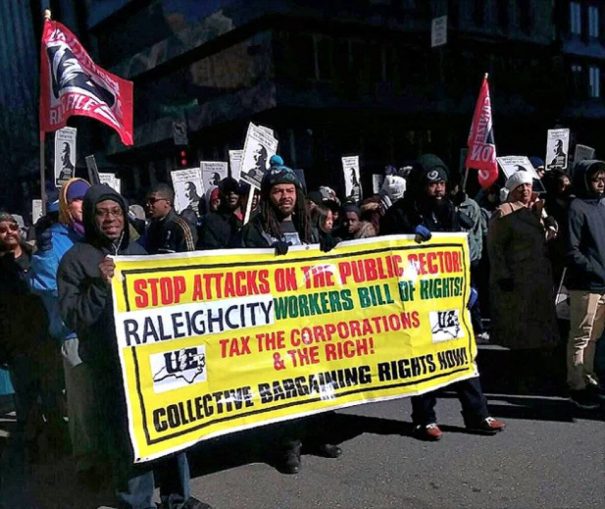 The arctic weather front that blasted the East Coast on the first week of this year took a toll on North Carolina’s cities. In Greensboro alone, more than 115 water mains broke — and despite near-zero temperatures, municipal workers like Ramone Johnson were responsible for fixing them.

“We had workers out in frigid weather,” said Johnson, a water department crew member and vice president of the Greensboro City Workers Union, a chapter of United Electrical Workers (UE) Local 150. “We are the backbone of the city. Without us the city does not run.” Yet North Carolina’s municipal workers say their work and their safety are undervalued by state and local governments.

The campaign seeks to challenge “right-to-work” (for less!) laws and further expose the ruling made by the International Labor Organization, an agency of the United Nations, that the Jim Crow ban on public sector collective bargaining is a violation of international human rights law.

On Jan. 12, the campaign kicked off when members of the newly formed Durham Workers Assembly, which includes UE150 Durham City Workers Union, Domestic Workers Alliance-We Dream in Black, Raise Up for $15 and the Duke Graduate Assistant Union, staged a press conference at City Hall in Durham. “We are fighting for a City Workers Bill of Rights, including the right to meet and confer with the City Manager about our workplace conditions and safety issues and an end to discrimination on the job,” stated sanitation equipment operator and UE150 Steward Daryl Brunson.

UE150 Municipal Council members plan to spend the time until the anniversary of Dr. King’s assassination on April 4 building a statewide coalition to fight for higher wages, grievance protections, safety and union rights.

North Carolina law prohibits collective bargaining for public sector workers. For a decade, Local 150 has been pushing to repeal it — and organizing municipal workers to fight for improved conditions even without bargaining rights.

City workers march across the state

On Jan. 15, the Dr. King holiday, city workers participated in marches and parades across the state, including in Greensboro, Raleigh, Greenville and Rocky Mount. The community and many in left groups joined in behind the city workers as they marched.

While the winter cold poses real challenges for city workers, extended shifts in the summer heat can be even more dangerous. Last summer, Anthony Milledge, a laborer in the city of Charlotte’s yard-waste division, died of a heat-related illness after a 14-hour shift working under a 97-degree heat index.

The strike that brought Dr. King to Memphis 50 years ago, on Feb. 2, 1968, began after two sanitation workers, Echol Cole and Robert Walker, were crushed to death in a garbage truck. Furious over the tragedy and the city’s longstanding neglect of the Black workforce, 1,300 workers walked out. Their signs said, “I Am a Man.” Black workers make up a large majority of North Carolina’s municipal workers today, as well.

After Milledge’s death, the union brought attention to the fact that no city in the state had a written policy to protect its own employees from excessive heat. Union members in Charlotte, Chapel Hill, Durham, Raleigh and Greensboro organized rallies, passed out pamphlets and held press conferences. Thanks to their efforts, many cities began drafting and implementing heat policies.

The campaign aims to establish statewide minimum standards for municipal working conditions. “City workers throughout the state face many of the same problems,” said Local 150 President Nathanette Mayo, a chemist with the city of Durham. “City administrators and managers typically come together to coordinate and track municipal work environments throughout the state. We believe that workers too should collaborate and organize.” >