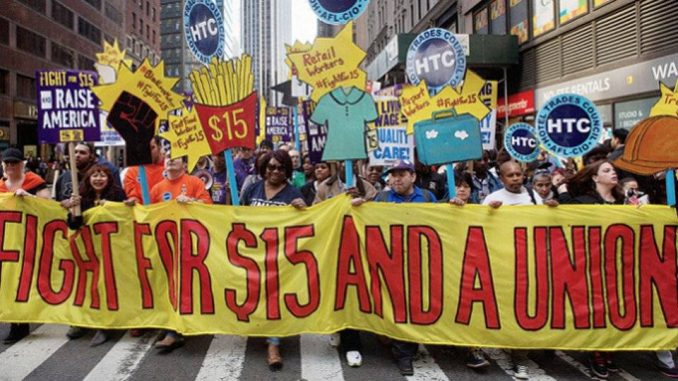 More than 1,200 fast food workers in New York City have agreed to kick in an hour’s pay — $13.50 — every month to Fast Food Justice to push for better conditions in the industry. Last May, the NYC Council passed the corresponding law, which took effect at the end of November.

The law requires fast food employers to let workers deduct a portion of their paycheck and send it to a designated nonprofit as a membership fee. This unorthodox arrangement was promoted by Fight for $15 and the Service Employees union as a way to organize a NYC industry with 65,000 low-wage workers that has proved a hard nut to crack.

“We’re going to continue to build power to win improvements for workers on the job,” said Tsedeye Gebreselassie, Fast Food Justice board chair and attorney at the National Employment Law Project, at a Jan. 5 press conference. The organization, created five months ago and registered by the city, will also provide free immigration services and legal help.

Under the law, at least 500 workers had to sign up before a group could receive contributions. “The fact that [FFJ] signed up 1,200 is impressive. It’s proof of the concept,” said Janice Fine, labor studies professor at Rutgers University, adding that people in other cities “are really interested.” (New York Times, Nov. 9)

The Restaurant Law Center, the legal arm of the National Restaurant Association, sued in federal court to overturn the law. One NLC argument, the Times reports, “is that requiring restaurant owners to forward money to workers’ groups is unconstitutional forced speech under the First Amendment.” But, FFJ asserts, “the money being forwarded belongs to the workers and not the restaurants.”

Shantel Walker, a Papa John’s employee, said workers have already benefited from the fight for livable wages, since she started at $7.50 an hour. “We are now making $13.50, on our way to $15 next year. The fast food workers sparked a global movement.” (New York Daily News, Jan. 10)

SIUE faculty union guilts chancellor to get the goods

Southern Illinois University Edwardsville recognized the SIUE Faculty Association, which represents 400 tenured and tenure-track faculty, as a bargaining unit in December 2016. (SIUEFA is affiliated with the National Education Association.) But during 2017 contract negotiations, the administration wanted to institute a cynical divide-and-conquer measure: exclude department chairs, who are 10 percent of the faculty, from the membership in exchange for 2 percent raises over the two-year contract, which had already been given to other SIUE union members.

Surrounding Chancellor Randy Pembrook at his mid-December holiday reception, about 50 union members handed him a framed copy of his July email — in which he wrote “how important people are to SIUE and how their sacrifices over four years of budget woes should be rewarded” — while chanting “Two plus two” for about 10 minutes. Within days the university signed a preliminary contract with the 2 percent raises. (Labor Tribune, Jan. 8) Bravo to courageous faculty for shaming the chancellor into making good on his words!

In a historic 66 percent victory on Dec. 8, workers at the Dollar General in Auxvasse, Mo., voted to unionize with Food and Commercial Workers Local 655. Dollar General operates 14,321 stores in 44 states, but this is the first to organize. (Fulton Sun, Dec. 12) It’s a major win, since convenience store and other retail workers are horribly exploited, with low wages, erratic scheduling and harassment, which doubles for women.

On Dec. 14, Dollar General filed a complaint with the National Labor Relations Board contesting the election to try to overturn the vote. Local 655 President David Cook told the St. Louis Labor Tribune how disappointing it was that “Dollar General, which makes billions of dollars every year … would rather slander one of their own employees with false accusations … than recognize [the workers’] legal rights.” (Jan. 1)

Meanwhile, the union filed a complaint on the employee’s behalf. A Local 655 spokesperson told the Labor Tribune that Dollar General “is showing its workers that if they vote for union bargaining, Dollar General will retaliate.” As of February 2016, the company had 113,400 employees.