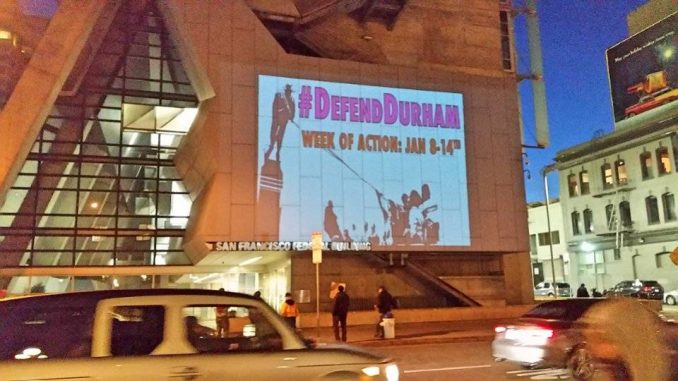 During the height of rush-hour traffic at 5:30 p.m. on Jan. 12, huge images were projected on the San Francisco Federal Building. These images showed the toppling of the Confederate statue in Durham, N.C., as well as spelled out the demands of San Francisco’s Anti Police-Terror Project.

This imaginative action was part of a week of local activities to #DefendDurham and in conjunction with the APTP’s #96Hours of #NonCompliance to #ReclaimMLK‘s Radical Legacy.

Workers World Party-Bay Area organized the slide projection and video, using the federal building as a giant screen. This was on Day One of APTP’s 96 hours, themed for events in noncompliance with “State Sponsored Violence.”

With the support of Resistance SF, which did the projection, WWP-Bay Area held a noise demo, blasting political music over a sound system during the projection. A small but enthusiastic crowd of supporters held signs, chanted a bit and talked to curious passersby. The action got plenty of views from cars, pedestrians and bikers, with the stop-and-go traffic allowing time for even the drivers to enjoy the show. It was a fun, happening event.