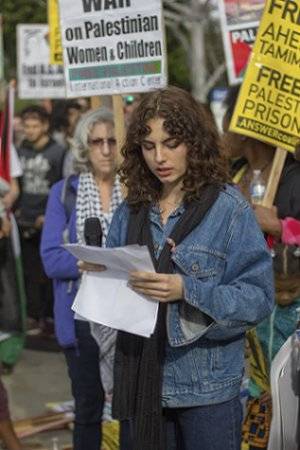 Los Angeles — Demanding the release from prison of a 16-year-old Palestinian woman, Ahed Tamimi, hundreds of people demonstrated outside the Israeli Consulate here on Jan. 6. Israel holds some 10,000 Palestinian political prisoners. Tamimi’s arrest has quickly become a potent symbol of the struggle to free them all.

The teenager is facing 12 charges and possibly years in jail after defending her family. The U.S. corporate media report that she was arrested after slapping a Zionist soldier, but they frequently leave out that it was after the soldier had slapped her. This occurred only hours after she witnessed soldiers shooting her cousin in the face with a rubber bullet and severely injuring him.

Her arrest came days later, during a nighttime raid on her home. When her mother, Nariman al Tamimi, visited her in jail, she was also arrested and remains in jail as well. Another member of the Tamimi family was killed by Israeli soldiers only days after Ahed’s arrest — the second Palestinian teenager to be killed by the Israeli state this month.

Ahed’s father, Bassem Tamimi, spoke to the Los Angeles demonstrators by phone, thanking them for their solidarity action. He drew a parallel between Zionist repression and South African apartheid.

The demonstration was called by Al-Awda, the Palestine Right to Return Coalition; LA4Palestine; Jews for Palestinian Right of Return; the International Action Center; and many other organizations, including students active in boycott, divest and sanctions work on campuses.

Representing the International Action Center, Palestinian artist and actor Ahlam Khamis read the following statement for Ahed, which she described as “a short prayer piece, from my atheist and loving heart to yours.”

“I give gratitude for Ahed Tamimi’s safety and well-being as she continues to give of herself for a better future — not only for Palestinians but for all of us who care about our world. I give gratitude for her self-love and divine radical spirit that keeps her whole and human in the face of a scary and violent criminal system. This spirit that can endure things children should not have to endure. This spirit, the spirit of a lioness, endures just to keep her family hopeful. Just to keep her village healthy and optimistic about what is to come. Just to keep the world charged.

“She will return home, unbroken. And she will hug her parents and she will hug her 15-year-old cousin, Muhammed Tamimi, who survived a close-range, rubber-coated, metal bullet, shot in the head the same day she was taken away by Israeli soldiers. They entered her family home and she cringed the sort of cringe when you are living in area C West Bank and are a child of the occupation. Muhammed Tamimi, who is missing parts of his skull now, a sweet tenth-grader, left side of his face and head shattered, will endure as well. He did last year — when he was just 14 he was taken in the middle of the night in his bedclothes, being a child suspected of throwing stones at military cars. He was interrogated without a lawyer and without his rights read to him. He ended up in Israeli jail for three months and his parents were not allowed to see him, not once, not even to ask their child if he was feeling alright. Now he will endure this head and face trauma. He will heal. He will become more strong, more bold, as an offering to himself and to us.

“This is the endurance that reaches beyond the instincts of survival. This resiliency is evolution. This is radical compassion. This is Love, this is real love, for any of us who stopped believing. We are here to honor this generous offering of love, everyone please take some because it is for you and there is more and more and more.

“This struggle, the honorable struggle, brings the greatest gift to our world and everyone living here, even to the monsters, the perpetrators, the colonizers themselves. It brings the magical frequency of POSSIBILITY.  We have hope for tomorrow and for a million years from now because of powerful women like Ahed, proving that we can survive the most brutal of storms. Proving that, YES, we can. Sí, se puede! Sí, se puede!”