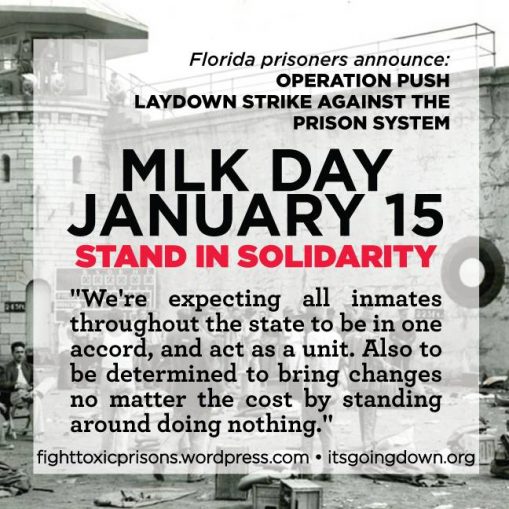 Most people don’t know there is one place in the U.S. where slavery is still legal — in prisons. The 13th Amendment to the U.S. Constitution, passed in 1864, abolished slavery and involuntary servitude — except as punishment for a crime.

But prisoners held in this enslavement are organizing resistance. In north Texas at the massive Allred Unit, some of more than 3,000 imprisoned men went on a 10-day hunger strike at the end of December. Allred has the most people held in solitary confinement in the Texas prison system. (Houston Chronicle, Jan. 4)

After two years of uprisings, organizing and rebellion in Alabama and Florida state prisons, prisoner-organizers have called for a “laydown strike” against the Florida prison system. The action, called Operation Push, is scheduled for Jan. 15, in solidarity with Martin Luther King Jr. Day.

According to Fight Toxic Prisons, the prisoners demand an end to prison slavery, price gouging by prison subcontractors and parole options for those with life sentences. They also raise the need for justice regarding the death penalty, voting rights and environmental health conditions.

A Florida prison organizer, interviewed by It’s Going Down, said the action will be “to willfully give up our privileges, like making phone calls, buying canteen, visits, and not attain to [attend] work assignments.” The organizer added, “We’re expecting all inmates throughout the state to be in one accord and act as a unit.” (tinyurl.com/yar5x43m)