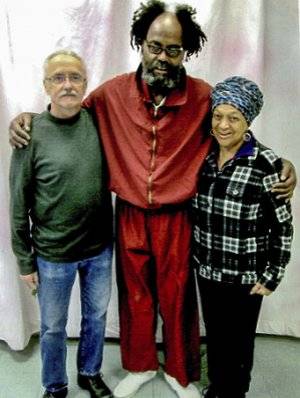 Mahanoy SCI, Pa. — Philadelphia political prisoner Mumia Abu-Jamal looks older than he should at 63, but his mind is as sharp as ever. The Uncompromising Minister of Confrontation Pam Africa of the MOVE Organization and I, Workers World newspaper reporter, peppered him with questions for over three hours on Jan. 8. We were in the visitors’ room at Mahanoy State Correctional Institute near Pottsville, Pa.

Mumia answered quickly, often with a sense of humor.  He displayed an encyclopedic knowledge of legal cases, from his own to that of Terrence Williams and other prisoners whose appeals he has sometimes participated in.

At the same time, Mumia is obviously not healthy. He walks slowly, perhaps because his feet are clearly swollen. He wears white corduroy slippers, with his right foot tightly stuffed in to support his heel.  But the slipper on his left foot occasionally falls off because it cannot be stuffed into the slipper.

Mumia had exposed himself to ultra violet rays for 90 seconds, followed by a bath, as recommended by Department of Correction doctors, just before he met us.  But his skin looked dry. As we talked, he often scratched the back of his neck, his chest, his leg and other areas.  He cannot sleep because of the constant itching. Parts of his body seem scaly and darker than other areas. When he lifted his pant leg, we saw horribly scarred skin with what appeared to be open sores. He explained that he is not allowed to show these sores when visitors want to take a photo with him.

Mumia’s appetite has decreased and he has lost a little weight. After a couple of hours, his right leg suddenly stiffened. He said he felt pain behind his right knee, which subsided after about 15 minutes. Pam Africa said that also happened during her last visit. He coughed several times, each time complaining of pain on the right side of his lower rib cage or below it.

Yet Mumia was in a good mood, despite his many ailments. At one point, in the middle of a spirited discussion about Harriet Tubman, all three of us broke out singing a chorus of the civil rights song, “Ain’t gonna let nobody turn us around!”.

Mumia has been unjustly imprisoned for 36 years, 30 of them in solitary confinement on death row. The DOC’s continuing failure to effectively treat his severe skin ailment amounts to nothing less than torture. It is one more reason he should be released from prison immediately.

In the meantime, supporters are asked to call three people:

Callers should demand that Mumia be taken to an independent medical facility, such as Geisinger Hospital, where he was taken after collapsing in 2015. The facility has the expertise to provide a thorough, hands-on diagnostic evaluation and supervised patient care.

If the Department of Health claims it has no jurisdiction over the DOC, remind them that their “mission is to promote healthy lifestyles, prevent injury and disease, and to assure the safe delivery of quality health care for all commonwealth citizens.”  That should include prisoners, too.

For more information, contact [email protected] or call 215-724-1618. Donations can be made at mobilization4mumia.com/donate-1/.