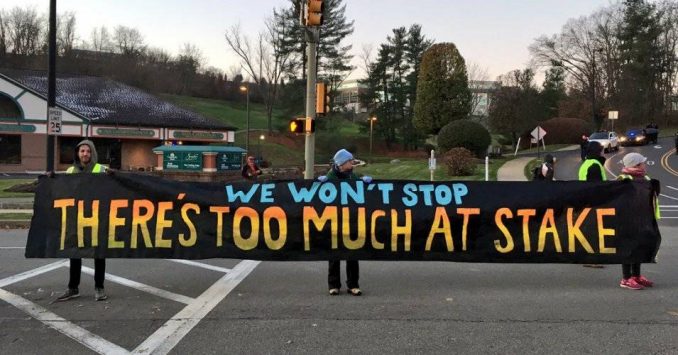 Pittsburgh protesters stop traffic Nov. 20 outside industrial park offices of Halliburton and fourteen other energy companies aiming to capitalize on the polluted fracking of the Marcellus Shale. 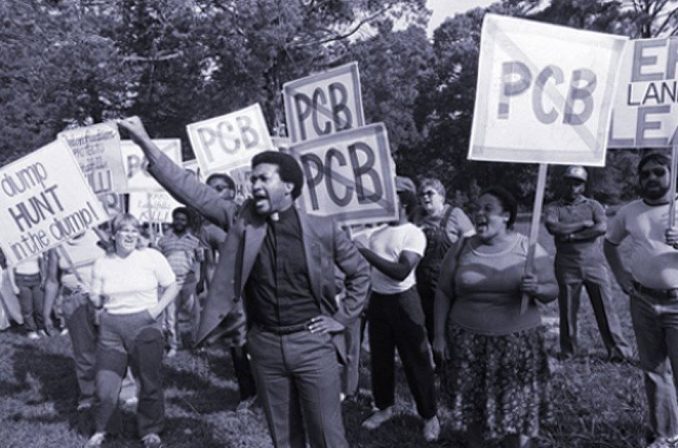 The devastating cold weather in half of the U.S. during the past weeks has been covered almost gleefully by the bourgeois media as scenic catastrophe — with virtually no connection to climate change and with no serious emphasis on the human toll.

U.S. viewers have been titillated with videos of storm-surge flooding in downtown Boston, a four-foot suffocation of snow over two days in Erie, Pa., and icicles in usually balmy Savannah, Ga.

The Weather Channel headline, “Cold blast causes at least 22 deaths across U.S.,” was illustrated with a visual of a belly-up dead lizard in Florida — playing down the fact that actual humans had died. (weather.com)

The climate crisis was trivialized and distorted by Chief-Denier Trump who tweeted that the freezing East Coast “could use a little bit of that good old Global Warming.”

On the contrary, international scientific research shows that increased trapping of heat in the earth’s atmosphere — “the greenhouse effect of human development” — is wreaking havoc across the entire spectrum of weather phenomena. (climate.nasa.gov/causes)

When the new year began in upstate Syracuse, N.Y., with the coldest weather in 114 years, the Kuskokwim River in Bethel, Alaska, still had not frozen into its usual “ice road,” denying 56 villages near this remote regional center the only transport for heavy, necessary supplies. On Jan. 5, wintery Moscow was 40 degrees warmer than Iowa City, while in Australia, summer heat became so extreme that tar on more than 6 miles of a major freeway melted.

If we decode the “greenhouse of human development,” what we see is the unchecked rampage of capitalism through the Earth — from the devastation of atmosphere-stabilizing rainforests cut down for profit to the unchecked trail of pollution left by expanding U.S. military bases. (tinyurl.com/y8cvgm59)

Yes, capitalism has declared a “weather war” on our planet — and human beings are also being wounded and dying. That means especially the poorest, the youngest, the oldest, those living with disabilities, those most oppressed because of their nationality, race, sexuality or gender — the people with the least access to physical safety and economic resources.

In the recent weather “bomb cyclone,” broken water mains in the U.S. South meant possible bacterial contamination, boil-water advisories and sickness for the most vulnerable people in cities like Atlanta; Jackson, Miss.; and Birmingham, Ala. Prisoners in Tennessee were exposed to mortal danger when the temperature in Nashville’s River Bend Maximum Security Institution did not rise above 25 degrees F, which is below freezing.

A “winter moratorium” on heat shutoffs because of inability to pay is only available to relatively few people in dire economic circumstances — not to most workers, struggling at the edge of financial survival. People end up having to choose between heat, food and medicine — and that means more illness and more death.

The lack of affordable, adequate housing everywhere in the U.S. sentences homeless people to die on city streets and in desperate tents hidden just off interstates. But people with rent-stabilized housing are also at risk as landlords cut off the heat and delay necessary repairs to empty the buildings for “redevelopment” and more profit.

Fighting back against the “climate war” of capitalism means acknowledging the importance of China’s recent decision to ban all sales of cars driven by gasoline and diesel fuel. Fighting back means remembering how Bolivarian Venezuela sent shipments of heating oil to communities of color in the U.S. during past winter crises.

Fighting back means organizing against gentrification and for affordable housing. It means militant struggle against Big Bank exploitation, landlord harassment, racist cop abuse and the white supremacist state — in communities from Equality for Flatbush in Brooklyn to Moratorium Now! in Detroit, from resistance inspired by Standing Rock to Puerto Ricans recovering their island.

Fighting back against the capitalist war on the Earth ultimately means fighting for socialism, where planning for the people — for our housing, health and happiness — can be accomplished in relation to a beautiful, dynamic, healthy Earth.