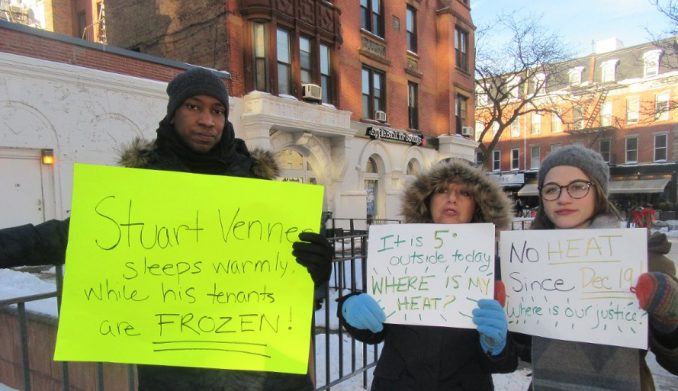 Brooklyn, N.Y. — An emergency demonstration in Brooklyn’s Clinton Hill neighborhood on Jan. 7 drew several dozen protesters supporting tenants of a four-story apartment building. Despite below-freezing temperatures for over a week, the residents have been denied any heat for more than 20 days.

“No heat, no rent!’ yelled the demonstrators. Tenants said their landlord, Stuart Venner, will not even answer phone calls and that they are planning to take him to housing court, along with exposing him with protests. Passing neighbors indicated their support of those suffering this unhealthy cruelty.

One placard held by a protester read, “Stuart Venner sleeps warmly while his tenants are frozen!” Supporters included activists with the Crown Heights Tenants Union and FUREE (Families United for Racial and Economic Equality).

Heat denial is not limited to wealthy landlords and developers. Headlines have aroused attention to thousands of other New York City families who have been denied needed heat and hot water. Since the frigid cold arrived with the new year, over 30 developments within the New York City Public Housing Authority now lack heat and hot water!

This appears to be a racist situation, as most NYCHA tenants are people of color. What does this say of the city government’s responsibility to the more than 400,000 people who live in NYCHA housing?  And what is this government doing — not doing — for the over 70,000 homeless people here?

Housing, heat and water should be among the fundamental human rights guaranteed to all. Instead, in New York and other cities around the United States, capitalism consigns the poorest and most oppressed to the direst of life-threatening conditions.