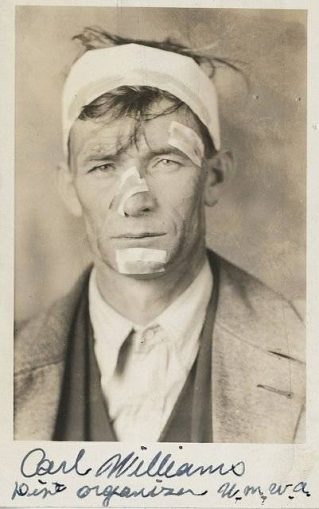 2017 marked the 80th anniversary of many important labor struggles. The victory of the Flint sit-down strike against mighty General Motors breathed confidence into the whole working class. There were over 500 other recorded sit-downs in 1937, most ending with the employer agreeing to union recognition. Millions of workers in auto, rubber, textile, retail, hotel and restaurant, agriculture, packinghouse and other industries flocked to unions affiliated with the militant Congress of Industrial Organizations.

Events of 1937 hold important lessons for workers today about the role of the state, even under a Democratic president. In 1936, when President Franklin Delano Roosevelt was seeking reelection to a second term, the Democratic Party made an appeal to “reelect Roosevelt — Friend of Labor.”

By 1937, however, this chief executive of the capitalist state was presiding over fierce and deadly repression against the masses of workers fighting for basic rights.

Puerto Rico, then as now, was a colony of the United States. No one responsible for the killings, including U.S.-appointed Governor Blanton Winship, was ever prosecuted.

In Harlan County, Kentucky — “Bloody Harlan” — there were repeated violent attacks on union workers from 1931 to 1939 by local police, vigilantes and federal troops. Anti-union thugs killed the son of a union supporter in 1937. Mine owners operated with impunity.

That year, supporters of the United Auto Workers were violently attacked by company goons and police in Detroit, Flint, Saginaw, Mich., and Anderson, Ind. In Detroit, police used tear gas and brute force to evict women sitting down in the Bernard Schwartz Cigar Corp. and in Yale & Towne locks.

Three of the Scottsboro Nine, African-American men imprisoned without trial for six years after being falsely accused of raping two white women, were sentenced in 1937: one to 75 years, one to 99 years and one to death. Only in 1950 was the last defendant released.

These are a few examples from 1937 that expose the class bias and racist character of the capitalist state — no “friend of labor.”

Little Steel strike: FDR says ‘plague on both your houses’

The Little Steel Strike of 1937 remains one of the bloodiest in U.S. history. Police and state-protected strikebreakers killed 17 strikers. Chicago police killed 10 in the infamous Memorial Day Massacre. Seven more died in a series of deadly clashes throughout northeast Ohio. A supporter was killed in Pennsylvania. Hundreds were seriously injured and over 2,000 were arrested.

The steel bosses, including U.S. Steel, were intransigent when it came to allowing unions in the mills. However, after the Flint sit-down victory the company agreed to recognize the CIO’s Steel Worker Organizing Committee rather than suffer a costly strike. Numerous smaller steel companies followed suit, as did Jones and Laughlin after a brief strike, followed by Crucible and then Pittsburgh.

On May 26, SWOC struck three hard-line companies — Republic, Inland, and Sheet and Tube — and one of Bethlehem’s mills shortly after.

The strike became more than a battle between these companies and 80,000 steelworkers seeking union recognition. The ruling class saw an opportunity, with Republic President Tom Girdler as its protagonist, to break the CIO. Moreover, the forces around Girdler were determined to push back the New Deal reforms won by the working class.

Despite intense repression, striking pickets had been able to keep the mills closed, preventing scabs from coming in. By June, however, Democratic Gov. Davey of Ohio was colluding with the companies to force the mills open. His argument was that those who wished not to strike had a “right to work.”

When CIO officials appealed to FDR to intervene, the president showed his true class colors. He drew an equal sign between the violence of the steel barons and the militant resistance of the union, much of it led by Communist Party Leaders Gus Hall, Robert Burke and others. Invoking Shakespeare, he declared “a plague on both your houses.”

CIO leader John L. Lewis rightly condemned Roosevelt’s decision “to curse with equal fervor and fine impartiality both labor and its adversaries when they become locked in deadly embrace.” The ruling class recognized this signal from FDR that the New Deal was being reined in; the Buffalo Evening News correspondent hailed this “change of heart.” (Ahmed White, “The Last Great Strike”)

The strikers kept up the fight, but by August the strike was defeated. Yet, out of 30-plus struck mills in seven states, one was the scene of a partial union victory — Inland’s Indiana Harbor mill. “Everybody took part in this lively strike,” wrote observer Mary Heaton Vorse in “Labor’s New Millions.” Women, children and foreign language groups had their own action days. “The Mexicans were especially active and formed the backbone of the strike.”

This kind of community support was an essential factor in hundreds of sit-downs and thousands of strikes that won union recognition in factories, hotels, restaurants and other workplaces.

Unions can’t rely on so-called “friends of labor.” Unions must revive militant class-struggle unionism and build solidarity — global as well as local — of all workers and oppressed.