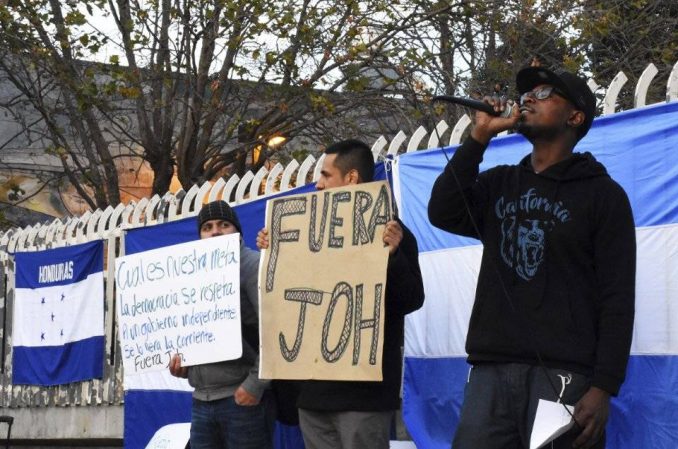 San Francisco — In solidarity with their compatriots in Honduras, who have poured into the streets of that Central American country in the hundreds of thousands, Hondurans living in the Bay Area have repeatedly rallied in the Mission District to protest widespread fraud in the Nov. 26 presidential election.

“This new electoral coup calls for a strong international response,” Porfirio Quintano, of Bay Area Hondurans United against the Dictatorship, told a Dec. 28 rally. “Look what’s been happening. Since the U.S.-backed 2009 coup in Honduras and their 2004 coup in Haiti, the U.S. imperialists have been complicit in the ouster of elected presidents in Paraguay and Brazil, as well as their constant intrigues against the elected government in Venezuela.”

“It’s clear that Washington has zero respect for the votes of the people of Latin America,” he added.

The Nov. 26 Honduran presidential election pitted incumbent strongman and U.S. favorite Juan Orlando Hernández against challenger Salvador Nasralla from the Alianza coalition. But after the Supreme Electoral Tribunal (TSE) announced that Nasralla was winning by a 5 percent margin with 71 percent of the votes counted, TSE abruptly stopped the count and declared Hernández the winner.

“They have stolen the votes from us,” Nasralla said at a Dec. 10 march. “This country will be ungovernable starting now.”

At the Bay Area rally, Quintano said popular anger at the stolen election is broader and more powerful today than after the coup in 2009. “Then, the protests were mainly in the larger cities. Today, the movement is everywhere in Honduras, including little villages in the countryside. Today all the people are involved in this fight.”

Welsh was part of an International Action Center delegation to Honduras shortly after the 2009 coup, as well as an international observer during the 2013 presidential “selection” of Juan Orlando Hernández.