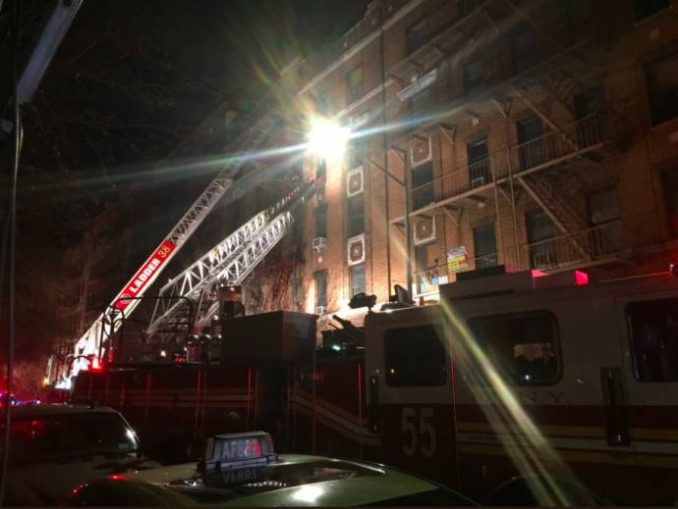 New York — The deadliest fire in this city in over 25 years erupted on the evening of Dec. 28. The large fire engulfed a residential building in the Belmont neighborhood of the Bronx, claiming 12 lives. Beginning in the kitchen of a ground-floor apartment, the fire quickly spread to the top of the five-story, walk-up building through a stairwell.

Who was at fault in this catastrophe? Media coverage in the New York Times, Daily News, Post and other media would have you believe it was the mother of two young children, who allegedly did not close her apartment door when she fled with them, allowing the fire to spread more quickly. New York Fire Department Commissioner Daniel Nigro egged the media on, saying, “Close the door, close the door, close the door” at a press conference the next day.

Barely mentioned in the frenzy to condemn a woman is that the NYC Fire Code requires landlords to install self-closing, fire-resistant doors in all buildings with three or more units. Such a door would have contained the fire inside the apartment longer, giving residents time to escape.

Rather than expose landlord negligence, most mainstream media rushed to blame this woman. The capitalist media would rather lay the deaths of 12 people at the feet of a mother concerned with getting her young children to safety than consider the culpability of the landlord, D&A Equities.

Coverage in the New York Times is typical: Despite at least eight articles and 9,000 words written about the fire in the three days afterwards, there is not a single mention of the fire door requirement.

New York City landlords routinely avoid basic maintenance of housing stock in working-class and oppressed neighborhoods such as Belmont, where the majority of the population is Latinx and the median income is below $26,000. (tinyurl.com/ybg932hd)

Why would landlords pay for fire doors now, when, in a few years, they can push current tenants out and gut-renovate the building for wealthier, gentrifying tenants? Or sell the building for a big profit to a developer who will tear it down and build luxury condos in its place for even bigger profits?

Under capitalism, housing is built and destroyed for the benefit of landlords and their drive for ever-greater profits. The lives of tenants figure relatively little in these calculations. Perversely, the landlord may even benefit from this fire: With the current renters displaced, the landlord can remodel the building for more affluent tenants without a protracted legal struggle to remove the current tenants. Historically, it is not unheard of for landlords to “burn out” tenants in rent-controlled apartments to accelerate renovation-for-profit.

Such a cruel, inhuman system, in which the lives of 12 people matter less than a landlord’s profits, does not deserve to exist. Only socialism, where housing is built and maintained for the benefit of the people, can provide decent, safe housing for all.