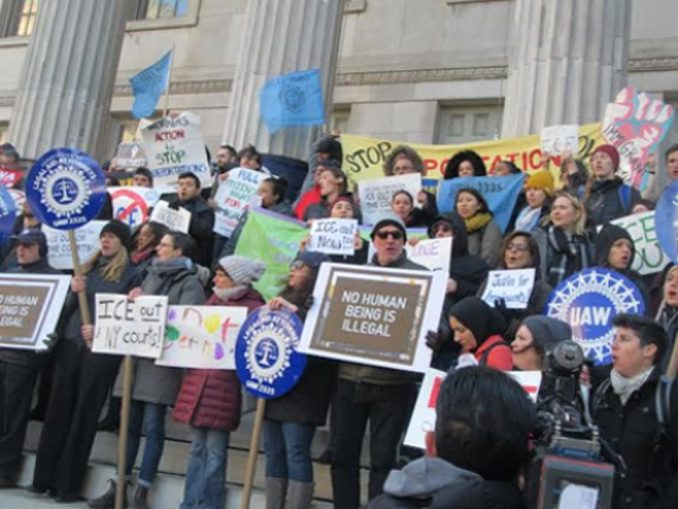 Over 400 lawyers rally on the steps of Brooklyn Borough Hall, Dec. 7.

U.S. Immigration and Customs Enforcement arrests of immigrants in courthouses have skyrocketed since the inauguration of Donald Trump in January 2017.  So, on Nov. 28, when agents with ICE snatched defendant Genaro Rojas Hernández in a Brooklyn Criminal Court hallway, dozens of Legal Aid lawyers responded in protest. These are the lawyers who most frequently defend low-income immigrants, documented or undocumented.

The lawyers spontaneously stormed out of the court and marched to the Brooklyn district attorney’s office. They demanded a policy to prevent court staff from collaborating with ICE agents in seizing immigrants who’ve had to come to court.

On Dec. 7, over 400 attorneys from the Legal Aid Society, the New York County Defender Services, Brooklyn Defender Services, The Bronx Defenders and the Neighborhood Defender Service of Harlem rallied on the steps of Brooklyn Borough Hall to protest these shocking seizures. They issued a joint statement expressing concern about “the proliferation of ICE courthouse arrests since January.”

Speakers at the rally called on the Office of Court Administration and Chief Judge Janet DiFiore to take immediate action to limit federal immigration enforcement’s ability to arrest clients in or around courthouses. The action was labor-union initiated by the Association of Legal Aid Attorneys/United Auto Workers Local 2325.

Official OCA statistics counted Hernández as the fortieth person arrested by ICE inside a New York City courthouse in 2017. But the Immigrant Defense Project, an immigrant rights and legal assistance group, puts the number at 70.

National ICE internal policies direct agents to limit arrests in locations designated as “sensitive,” including schools, hospitals and churches. These policies do not cover courthouses. Local OCA guidelines allow ICE agents to conduct operations in courthouse public areas as long as agents identify themselves upon entry. Twenty seventeen is the first year that New York has tracked ICE arrests in courthouses.

In Hernández’s case, one agent twice denied he was with ICE when Legal Aid attorney Rebecca Kavanagh inquired, yet moments later he assisted another agent in the arrest. At least three other court officers were involved in the arrest, despite claims by OCA spokesman Lucian Chalfen that “court officers are not complicit, do not coordinate with, facilitate or impede actions by outside law enforcement, including ICE agents, when they effect an arrest inside New York state courthouses.” (law.com, Dec. 7)

The Dec. 7 rally was endorsed by over 90 organizations, including unions, and community action, legal rights and immigrant rights groups. In a statement, they emphasized that “ICE’s continued presence in our courts causes fear to those that have a right under the Constitution to face any charges against them. They deter those seeking redress from the courts and our staff’s ability to provide zealous representation to their clients. The harm is immeasurable, and it only stands to grow.”