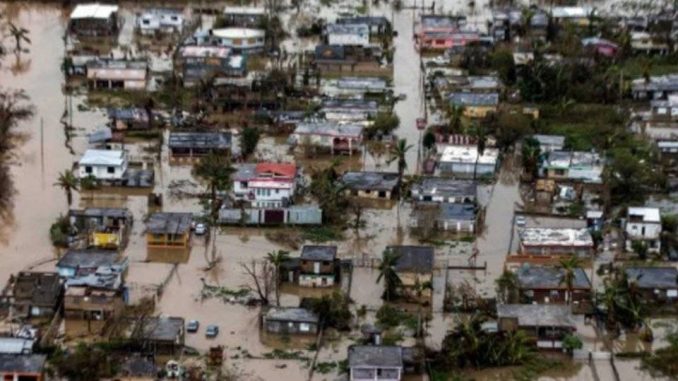 The problem is that although Puerto Ricans know how to fish, the colonial condition to which they have been subjected for more than a century prevents them from fishing. Then there is that other saying that describes the Yankee colonialist, who “is like the gardener’s dog, who neither eats nor lets you eat.”

More than 100 days after Hurricane Maria’s devastation, there is still no reliable electricity in almost half the island and the source of drinking water is precarious, largely maintained by on-site generators.

Aid from federal entities — the Federal Emergency Management Agency and the U.S. Corps of Army Engineers — has been criminally slow and inadequate, causing hundreds of deaths due to lack of essential services. However, the U.S. government, like the gardener’s dog, prevents other countries from sending solidarity aid to the Caribbean archipelago to meet those needs. These are the precise needs that were caused by Puerto Rico’s subjugation to the empire, which caused the economic collapse of its colony.

Is this anything but a perverse blockade of an entire people?

On top of this, the impact that the recently approved Tax Cuts and Jobs Act will have on Puerto Rico reveals that the domination of the empire over this archipelago adds up to criminal strangulation by straitjacket. Many people in Puerto Rico describe it as “the other hurricane,” referring to its devastating effect on the island’s economy.

What does this law contain regarding Puerto Rico?

Signed by the U.S. president on Dec. 22, this law imposes a tax rate of 12.5 percent on intellectual property — trademarks, patents and technological developments — of U.S. companies that operate in the island. That these companies, called “controlled foreign corporations,” had enjoyed generous tax exemptions in their place of origin in the U.S., even if production was in Puerto Rico, illustrates the inconsistencies and contradictions of the colonial state. Now, for this tax purpose, the law reaffirms Puerto Rico as a “foreign jurisdiction,” bringing into focus the 2016 U.S. court decision that PR belongs to, but is not part of, the USA.

As we explained in previous articles, the empire develops and imposes its will on the various economic sectors according to its interests. From the destruction of the currency and the imposition of the dollar at the beginning of the 20th century, this includes the monoculture of sugar cane, textile manufacturing and petroleum refining (of which there is none in Puerto Rico) to the most recent development bringing in high-polluting industries of pharmaceuticals and medical equipment.

Manufacturing, of which 40 percent is pharmaceuticals and medical equipment, is the basis of the Puerto Rican economy today. As U.S.-based companies, they take the profits generated by Puerto Rican labor to the United States. These are the industries that will be most affected by the new tax, which puts the island’s government and the Puerto Rican industrialists in total panic. They anticipate that the manufacturers will abandon the island, taking with them the tiny 4 percent tax contribution to the coffers of the Puerto Rican government and leaving more than 70,000 workers unemployed. Although the effects would probably not be seen until 2019, the fear is that it will be another hurdle to overcome if they want to attract new U.S.-based industries.

The indifference and contempt with which the issue of Puerto Rico has been addressed in the U.S. Congress deserve a separate article because they reaffirm what pro-independence supporters have maintained for decades: The United States is not interested in the Puerto Rican people as deserving either assistance or respect, much less as another state. That  reaffirms what independence leader Don Pedro Albizu Campos so often said: “The USA is interested in the cage, but not in the birds.”

Those who have been able to follow — at the risk of becoming nauseous — the attempts of the resident commissioner in Washington, PR Representative Jenniffer González, and of Puerto Rican Gov. Ricardo “Ricky” Roselló to obtain from the U.S. Congress exemptions and benefits in the proposed tax law for Puerto Rico can easily reach the same conclusions as did the independence movement, whatever their ideological orientation. González is a member of the Republican Party in the U.S., but in PR she is a member of the same New Progressive Party as her boss Roselló. He, in turn, belongs to the U.S. Democratic Party, showing the stupidity of colonialism!

While Gonzalez wandered like a lost soul through the corridors of the U.S. Capitol, pleading to Republican Congress members for statehood and for favors, her boss Roselló — submissive to the empire — kept sending letters to and visiting Congress members in Washington, begging for exemptions and crumbs.

In the end, the empire prevailed. Congressional ears refused to hear the requests for help for the reconstruction of Puerto Rico after María. Congress will not negotiate an aid proposal for the states and territories affected by the latest natural disasters until January.

It is this last thrust that makes clear the urgent need for a process of decolonization. The fantasy of the “Commonwealth of Puerto Rico” ended in June 2016 when Washington ruled that Puerto Rico’s powers are at the steps of the U.S. Congress, imposing immediately the dictatorial Fiscal Control Board, the “Junta.” And now it remains clearer than ever that the United States neither is interested in Puerto Rico being part of the United States nor wants Puerto Rico to be part of it, that is, as another state. Along with 2017 should be buried all those mementos reading “51st State.”

As long as Puerto Rico remains a colony, there will be no economic development that benefits its population.

The work needed for decolonization is enormous. It takes profound and consistent work to break down what the Cointelpro, anti-independence police actions have built in Puerto Rico. Unity in action is urgently needed; united decolonization campaigns are needed, despite ideological and tactical differences.

There were both pacifist groups and those that believed in armed struggle; each one did its part according to its ideology, but with the final goal of ending racist segregation. In Puerto Rico we have precedents: the telephone strike of 1998, the struggle to rid Vieques island of the U.S. Navy and the campaigns for the liberation of our political prisoners.

Now no less an effort is needed. It is essential. Above all, a great popular awareness campaign is needed.

It is time for what this writer witnessed during her recent trip to PR: The people — people who are suffering from the corruption and abandonment of both local and federal governments — are ready. There is not much to explain about the abandonment of the federal government; it is enough to see the absence of the famous blue roof tarps of FEMA in the mountains.

We must go to every corner fo the island — from Culebra and Vieques, to Cabo Rojo and Ceiba, to the poor barrios, to La Perla, to Lloréns. The pro-independence and progressive movement, the dynamic youth groups that are picking up the revolutionary baton, the LGBT groups, students, young and not so young, with or without disabilities.

All of us need to unite to decolonize ourselves and Puerto Rico and to forge a new homeland. There is creativity; what has been missing is the decisive will, and that is flourishing in the thousands of community groups being born around the archipelago. We can, along with the Puerto Ricans in exile in the United States — together we are one people — as long as Puerto Rico is their North Star and not the empire.

End the Fiscal Control Board!

Solidarity and justice, not charity!

Stop the blockade of Puerto Rico!

Repeal the Cabotage Law and cancel the debt!

Joubert-Ceci is a native of the Bélgica neighborhood of Ponce and is currently living in exile in the city of Philadelphia.