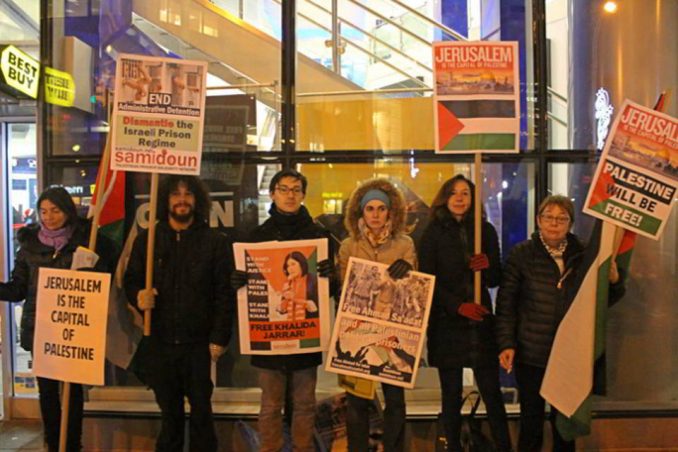 Excerpts from a report by Samidoun.net

New Yorkers marked the 50th anniversary of the Palestinian revolutionary left and the founding of the Popular Front for the Liberation of Palestine at a seminar in Manhattan on Dec. 11. The event, organized by Samidoun Palestinian Prisoner Solidarity Network, commemorated and celebrated the ongoing struggle of the Palestinian left in the liberation movement.

The event, at the Solidarity Center, included an introduction to the history and development of the PFLP leading up to and following its founding on Dec. 11, 1967.

Events marking the 50th anniversary of the founding of the PFLP took place in occupied Palestine as well as in Lebanon, Syria, Turkey, Germany, Denmark, Italy, the U.K., France and other countries around the world.

A recorded video from Leila Khaled, historic Palestinian resistance icon and current member of the Political Bureau of the PFLP, provided an overview of the role of the PFLP and a reminiscence of the early days of its founding.

The event’s keynote presentation was a live video discussion with Khaled Barakat, the international representative of the Campaign to Free Ahmad Sa’adat, the imprisoned general secretary of the PFLP. Barakat provided a Palestinian leftist take on the current political situation of the Palestinian people, especially the upsurge following Trump’s declaration on Jerusalem.

Barakat’s talk and the ensuing question and answer period covered a wide range of issues, from the war on Yemen to the role of the Palestinian Authority. He reviewed the 100 years of Palestinian struggle against colonialism and for liberation, focusing on the death of the so-called “two-state solution” and the nature of the Palestinian liberation movement. He addressed the role of the historic and current enemy camp, including Zionism, imperialism and Arab reactionary regimes. “Our people are not weak, they are strong, and Palestinians are still capable of bringing the struggle forward.”

Barakat emphasized that the Palestinian left is “also an Arab movement and also an international movement. … Our internationalist dimension does not only mean having comrades from outside the Arab world joining our struggle, but also to be a genuine part of their struggles.” He saluted the Black Liberation movement as a global inspiration to freedom struggles.

The evening event followed an outdoor protest in front of the Best Buy electronics store in Union Square as part of the ongoing Samidoun campaign to build the boycott of Hewlett-Packard. Protesters also emphasized their rejection of Trump’s declaration purporting to “recognize” Jerusalem as the capital of Israel, emphasizing that Jerusalem is Palestine’s capital. They also focused on the cases of Palestinian political prisoners, including PFLP General Secretary and Palestinian national leader Ahmad Sa’adat and imprisoned leftist parliamentarian and advocate Khalida Jarrar.

For full article and video of meeting, see tinyurl.com/y9qxtmvz