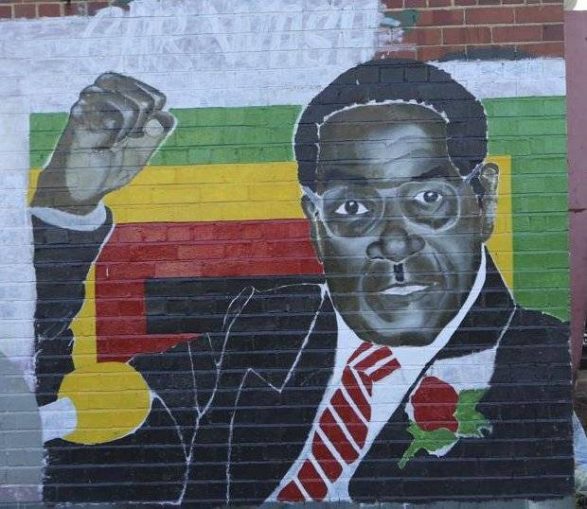 A portrait of Robert Mugabe in Harare, Zimbabwe.

Based on a talk given at a Dec. 2 Workers World Party forum in New York City. To hear the entire talk, go to tinyurl.com/ybfmw8a5.

The resignation of Robert Mugabe is changing the social landscape not only for the people of Zimbabwe but for all of Africa. This development is part and parcel of the ongoing struggle for independence and sovereignty against imperialism.

Walter Rodney, the martyred Guyanese leader who wrote “How Europe Underdeveloped Africa” in 1972, applied a Marxist, materialist worldview towards Africa. In the first chapter that addressed “What is development and underdevelopment?” Rodney states: “An even more indispensable component of modern underdevelopment is that it expresses a particular relationship of exploitation: namely, the exploitation of one country by another. All of the countries named as ‘underdeveloped’ in the world are exploited by others; and the underdevelopment with which the world is now preoccupied is a product of capitalist, imperialist and colonialist exploitation.

“African and Asian societies were developing independently until they were taken over directly or indirectly by the capitalist powers. When that happened, exploitation increased and the export of surplus ensued, depriving the societies of the benefit of their natural resources and labor. That is an integral part of underdevelopment in the contemporary sense.”

The Berlin Conference in 1884-85 — the “Scramble for Africa” conference — is where the European capitalist countries met to carve up virtually the entire African continent in order to expand their markets for profits by super-exploiting African labor and plundering its superrich mineral resources. The trans-Atlantic slave trade, resulting in tens of millions of African peoples being stolen from their homeland, laid the foundation for colonialism and neocolonialism.

In the case of Zimbabwe, it was Cecil Rhodes who became the British colonizer of what was called Rhodesia in the late 1800s. Rhodes established the DeBeers Mining Company, known for its stolen diamonds from Zimbabwe. He treated the entire country as his private slave plantation with the backing of state brutality.

Rodney comments about Zimbabwe’s earliest stages of development: “When Cecil Rhodes sent in his agents to rob and steal in Zimbabwe, they and other Europeans marveled at the surviving ruins of the Zimbabwe culture, and automatically assumed that it had been built by white people. Even today there is still a tendency to consider the achievements with a sense of wonder rather than with the calm acceptance that it was a perfectly logical outgrowth of human social development within Africa, as part of the universal process by which man’s labour opened up new horizons. The sense of reality can only be restored by making it clear that the architecture rested on a foundation of advanced agriculture and mining, which had come into existence over centuries of evolution.”

Ian Smith was proclaimed prime minister of Rhodesia in 1964 and confiscated 6,000 acres for himself. His apartheid policies codified white farmers’ use of the land for commercial farming of crops like tobacco to be sold as commodities on the world capitalist market. So while these farmers were enriching themselves, the people of Zimbabwe faced starvation and were reduced to being “tenants” on their own lands.

Carrying forth the legacy of the first two phases of the liberation struggle, the Third Chimurenga (liberation struggle) created two fronts which arose in the late 1960s — one was ZANU (Zimbabwe African National Union) led by Mugabe and the other was ZAPU (Zimbabwe African People Union) led by Joshua Nkomo. These two guerrilla factions joined forces as the Patriotic Front to force the Smith government to the negotiating table in Britain and to sign the 1980 Lancaster House Accords, which was a compromise that supposedly held the British government accountable for financially compensating white farmers so that Black farmers could reclaim their lands.

A large sector of those who fought for the liberation of Zimbabwe were landless Black farmers, now commonly referred to as war veterans from the liberation struggle. Twenty years later, these same war veterans pressured the Mugabe government to remove the commercial farmers, by force if necessary, once the British government reneged on the Lancaster accord.

Tony Blair and George W. Bush imposed sanctions on Zimbabwe starting in 2002 as an act of war against the population. These sanctions slashed fuel and food subsidies with the aim of turning the masses against Mugabe by making him the scapegoat for any economic hardships imposed by imperialism.

When Mugabe was re-elected as president during his 37-year tenure, both Blair and Bush declared the elections undemocratic, while attempting to prop up their puppet candidate. When a devastating drought hit Zimbabwe and other parts of southern Africa very hard in 2003, the imperialists blamed Mugabe for it.

The Zimbabwe Congress of Trade Unions, the largest workers union, says the country’s unemployment rate is now at 90 percent. The country has also been severely impacted by the AIDS crisis, along with losing a major trading partner when the Soviet Union collapsed in 1991.

Today, Zimbabwe’s foreign debt is more than $7 billion, more than half of its gross domestic product. According to a July 7 Reuters report, “The suggested reforms include slashing public sector wages, now at more than 90 percent of the national budget, reducing farm subsidies, improving transparency in the mining sector and reaching an agreement on the compensation of white farmers.”

Why have U.S. and British imperialism hated Mugabe since he became the first democratically elected president of Zimbabwe? Why are they glad he was forced to resign?

Mugabe is a bourgeois nationalist, not a socialist. There are two fundamental reasons why the imperialists hate him so much. Number one is that Mugabe is a former leader of a national liberation movement that helped to bring an end to a racist, apartheid-like regime.

Number two is that he backed the war veterans taking back their land from the white colonizers and was unapologetic about doing so. With all his political contradictions, Mugabe was willing to stand up against U.S. and British imperialists.

It is this defiance against imperialism, which seeks to break all bonds of international proletarian solidarity, especially with the most oppressed, that our party has done everything it can to defend. That means defending Zimbabwe’s leadership against imperialist intervention both economically and politically.

Like any country, Zimbabwe has a right to develop its economic infrastructure to meet the needs of the people, and not to have its economy chained to foreign debt to the banks that it can never pay in 10 lifetimes.

With all its millions of acres of arable lands, Zimbabwe has the capacity to feed its population if it weren’t forced to export food to pay off the interest on its foreign debt. Cancel the debt!

No matter what happens in Zimbabwe going forth, we know that U.S. and British imperialism will not stop their intervention into the internal affairs of Zimbabwe. They have made that abundantly clear by saying that “fair and democratic” elections have to take place when they say so.

The biggest threat to the African continent today is the U.S. Africa Command, more commonly known as AFRICOM, created by the Pentagon under the guise of fighting so-called terrorism. AFRICOM is based in at least 38 African countries. Three of its bases are in Zambia, South Africa and Botswana, countries that border Zimbabwe.

AFRICOM does not exist to protect the sovereignty of the African peoples, but to protect the interests of the monopolies by repressing any kind of mass resistance to its brutal occupation, no matter the ideology of the leadership to that resistance.