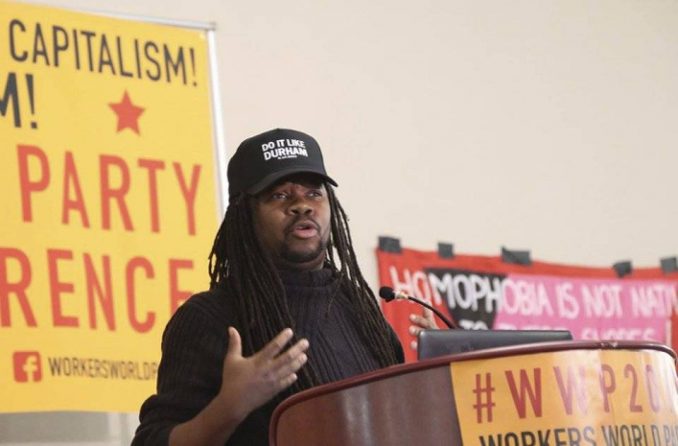 This talk was given on Nov. 19 at the 2017 Workers World Party national conference in Newark, N.J.

I’m going to be very honest with you, comrades. I’ve changed my talk completely — the talk I prepared. I want to thank and dedicate this to candidate Rachel from Baltimore who made me think about how I wanted to give this talk today. Rachel asked me in a workshop yesterday, “Why did you join the party?”

I met the party when I was 22 years old as a Black, newly queer, not-yet-trans being in the world. I was wearing dashikis and combat boots. I think I had dreads at that point of my life. But as an activist, to be honest, the reason I joined Workers World Party is because I wanted to win. I didn’t have a lot of big political philosophy behind that. I just knew in my gut that this organization was the organization I was going to join because I wanted to win.

For me and I think for a lot of us that have come into the world as an activist, it’s a lot about the objective conditions. It’s a lot about who we are. On either side of my family, I was the very first to be born in the United States. My parents are Caribbean, Jamaican, migrants. I was the guinea pig who was going to school for the first time in Boston, Mass., in a racist, segregated city.

Workers World Party had a big demonstration in Boston in 1974. I was four years old, so I wasn’t at that demonstration.  And four years later, I was still a child on a school bus having rocks thrown at me, having the N-word thrown at me, snowballs, taunting back and forth. This is me just going to school every single day, a child going to elementary school. These are the things that shake me.

There were two things that actually politicized me as a person.

One was the first Gulf War in 1990. I might not have known that much about Palestine. I probably wasn’t really clear about what was going on in the Middle East. But what I did know was that I had a friend who was Jamaican. He was younger than me, a young brother who was going into the military because he didn’t want to go to college, because he wanted to find a job. I gave him a going-away party in August. By the fall of 1990, he was one of the first ground troops in Saudi Arabia.

So I joined the Emergency New England Coalition to Stop U.S. Intervention in the Middle East. And that was the first time I met and knew of the Party.

The other thing that shook me politically was the Rodney King verdict. I should say the non-verdict of the four cops who brutalized Rodney King. I was in college. I was 22 years old. I was graduating. This was before the days the internet took off. There was no social media. We didn’t have cell phones. None of that was happening. But someone had videotaped his beating. And it went global.

Young people took to the streets. People started saying, “Hell, no.” This was the first time in my life I ever organized a demonstration, actually with my sister and my cousin. The very first time. Students were marching all over the country.

But fast forward. I want to share the moment truthfully of what made me join Workers World. I had met the party. I was in the coalition for three years. I was kind of checking out the party like a lot of you folks are: “I’m going to check out Workers World Party, see what they’re about, see how these folks roll.”

In the end, young people I knew were on stage with Nelson Mandela. The city had to bring him into the Black community. It was a big celebration. It was amazing. Our party was part of that. It was awesome.

But what made me want to join the party was when the African National Congress had a private reception, and the social service groups, the nonprofits, the mass groups that I was around didn’t get invited. The group that got invited — that the ANC wanted at this private reception — was Workers World Party.

That made me understand the distinction of what it is to be in a party, to have international relationships with other organizations worldwide. And I’ve had this experience when we’ve had trips to Cuba and Venezuela and other liberation struggles.

The distinction of what a party does is to be a vanguard, fighting organization. That is what made me understand: “Oh, what is necessary to win!” I don’t even know how to count how long I’ve been in the party. It’s not been that long, but to me it feels limitless in so many ways, because of how much I have learned and have gained from being a member of Workers World.

First and foremost, this organization fights on every level. We have decades of years around the disabled struggle, or we could talk about our going to Standing Rock and the Day of Mourning and how many years we have been a part of that Indigenous struggle. Or we could talk about [Dotty Ballan’s 1971] book on feminism and Marxism or [Bob McCubbin’s 1976] book on LGBT liberation and Marxism. And we could talk about how comrades have never had to hide in the closet in the party for being a communist and being queer at the same time.

Many times at WWP conferences, comrades disclose things about themselves, whether it’s their process about their recovery, or their process around the jobs they have chosen in their lives, or what have you, all the things we are.

We don’t just come to these realizations. We grapple with them. We look at them. Again, there are generations of history and struggle in our getting a better understanding that there are comrades among us who don’t use pronouns. And there are comrades around us who are binary like myself who like the pronoun “he” — because I spent a lot of money to transition as a trans person. I love my binary identity, but still fight tooth and nail for my gender-nonconforming comrades. And, even more importantly, there are cis comrades who are sometimes out there the furthest.

The last thing is how I actually, truly met the party. Comrade Maureen in Boston was the first comrade I ever met. Again, as a young person in Boston, Mass., who didn’t have a lot of Marxist understanding or analysis, I just knew I wanted to be free. I wanted to win.

During the opening stages of the first Gulf War, there was sort of a convergence of people, I wouldn’t even call it a rally. Bombs were flying. The U.S. was putting out that it was going to war and people met in an area of Boston. Folks didn’t even have signs, but they were chanting and moving back and forth. And there were Zionists, right-wingers, screaming, yelling.

I said, “And what is your name?” That was Comrade Maureen.

This is what we’ve been talking about. That the party is not rhetoric. It is about what the practice looks like in the struggle: the Leninist application of the national question and fighting racism.

We are a cadre organization. We are a revolutionary organization. We are a fighting organization. And in a lot of ways we are like a family. Truly like a family. We know that we have each other’s back. That we can call each other at 4 o’clock in the morning and say: “Comrade, there is something going on in the city and we need to move on a dime.” If our comrades are getting death threats, or if our comrades are being chased by the state, we know we are going to mobilize and our cameras are ready. That’s what we do in the party.

I believe — I want to say it over and over again — that we are the party that can make that happen. I believe that we can win.