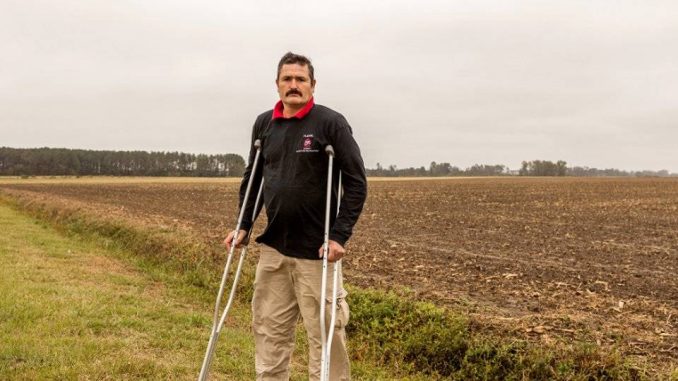 Arturo Hernandez, a member of the farmworkers’ union in North Carolina, is recovering from on-the-job injury.

The North Carolina ruling class is trying to rip labor rights from 100,000 farmworkers. The North Carolina Farm Act of 2017 attacks what bosses fear most — the right of workers to organize. The law would prohibit workers from signing agreements relating to lawsuits, settlements or collective bargaining agreements and outlaw automatic dues deduction from paychecks. Workers filed a federal lawsuit Nov. 15 to declare this bill unconstitutional under the First and Fourteenth Amendments.

In the workers’ corner are the Southern Poverty Law Center, the American Civil Liberties Union, the North Carolina Justice Center and the Farm Labor Organizing Committee. In the past FLOC has used these very agreements to secure higher wages and end exploitative fees. The act is blatantly racist, specifically targeting the Latinx community, who are the vast majority — 90 percent — of the farmworkers in the state. North Carolina farmworkers generate $12 billion for the state’s economy and work seasonally under precarious H-2A visas. (floc.org, Nov. 15)

State Sen. Brent Jackson, the bill’s primary sponsor, owns Jackson Farming Co., which farmworkers and FLOC have sued successfully for wage theft. This bill is class warfare, but workers and their allies are returning fire with unity and solidarity. We’re confident they’ll bring such racist, anti-worker policies to justice.

Whenever bosses say they’re helping workers, your alarm button better start beeping. It sure went off when Trump’s Department of Labor announced Dec. 4 that, responding to the need for wage equity in the restaurant industry, it’s offering a new regulation: Workplaces can now share tips earned by some employees with co-workers. Pro-worker groups jumped to oppose it. Christine Owens, head of the National Employment Law Project, said the solution was “not for the Labor Department to rig the rules so employers can essentially steal earnings from tipped workers to subsidize the businesses’ low-wage model.”

Responding for the Economic Policy Institute, Heidi Shierholz noted the latest research shows that total wages stolen from workers due to minimum wage violations exceed $15 billion each year and that workers in restaurants and bars are more likely to suffer from it than other workers. Due to so much illegal wage theft, “it seems obvious that when employers can legally pocket the tips earned by their employees, many will do so.” No wonder the National Restaurant Association applauds the rule. (wsbtv.com, Dec. 5)

Restaurant Opportunities Centers United (ROC), founded “to improve wages and working conditions for the 14 million people who work in America’s restaurant industry,” initiated a campaign against the regulation. To add your objection, visit rocunited.org/notiptheft.

When bosses at Fairmont Scales in Vermont demanded major concessions, the workers fought back. United Electric Workers Local 234 has represented employees at the St. Johnsbury plant for over 80 years — its members are the only unionized workers in the nationwide company. The elected strike committee, like other UE committees, is majority women. After Fairbanks tried to raise family health insurance to $200 a month, change how vacation time was accrued and rejected the local’s contract offer, the local immediately voted to strike.

The workers set up picket lines at 5 a.m. on Nov. 1. Donations immediately poured in from local businesses, community groups and other unions — coffee, pizza, wood for a warming fire and umbrellas for rainy days. Withstanding heavy rain and boss violence, the workers held the line 24-7 for over a week. Only one truck got through, when cops escorting it threatened to arrest strikers.

Management caved after eight days of no production, offering the workers a solid three-year contract with raises and better benefits and working conditions. Wages were increased by 8 percent, weekly insurance premium contributions were capped at $10 a year and stewards have more time on the clock to work on grievances. Other wins include new protections for gender identity. (ueunion.org, Dec. 1) UE Local 234 sets an example for all workers: Having confidence in your union and using the strike weapon will lead you to taste victory.

On the National Day of Action for Immigrant Worker Justice, Dec. 6, unions turned out at the Capitol in Washington, D.C., to demand that Congress pass a clean DREAM Act and create a permanent legal pathway for working people with Temporary Protected Status. Joining with immigrant rights organizations and youth fighting for their lives, unions are showing a new social justice militancy against Trump’s racist, ­anti-worker agenda.