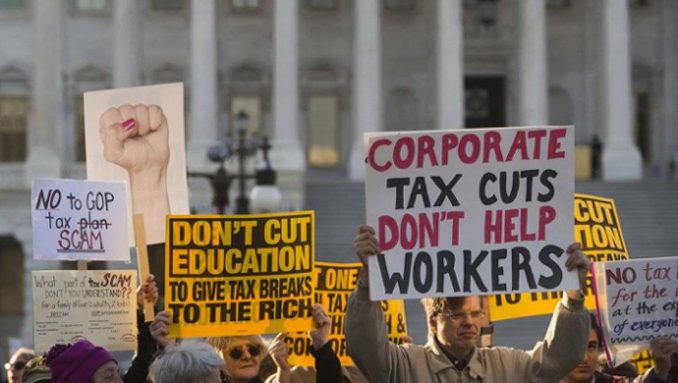 From small towns to big cities, nationwide protests erupted in response to the pro-rich “tax reform” bill passed by both the House and the Senate. The bill now goes to a conference committee, where pro-business legislators will create a final bill that will cut taxes by some $1.5 trillion, with almost all the savings going to Wall Street.

From Asheville, N.C., to San Diego, from Pocatello, Idaho, to Pittsburgh, from a few dozen people to many thousands, people poured into the streets voicing their objections. Some objected to one or another particularly onerous part of the bill, others to the whole rotten thing.

It’s easy to see why. Both the Senate and House versions eliminate the Affordable Care Act mandate. This erasure would take away health insurance for 13 million people, according to the Congressional Budget Office (CBO). It would remove Medicaid recipients. It would even cancel subsidies to employer-sponsored health insurance, just as premiums skyrocket.

Protesters disrupted a Senate hearing in Washington on the health cutbacks in the bill on Nov. 28, shouting “Shame!” and “Don’t kill us! Kill the bill!” Thirty-six protesters, some in wheelchairs, were arrested. (huffingtonpost.com, Nov. 28)

Graduate students at more than 40 campuses held protests against the provision in the House portion of the bill that would tax their tuition waivers. “One in four doctoral students nationwide received tuition waivers in 2012, according to the Council of Graduate Schools — along with a smaller percentage of undergrads. The American Council on Education estimates the measure would cost students some $65 billion by 2027.

“‘The [University of Texas] would collapse without our labor,’ said Nick Bloom, a 27-year-old doctoral student in American studies who helped organize the event. ‘We grade papers, we work as teaching assistants, we work as tutors, all in addition to our coursework and research.’ Bloom said he makes about $18,000 a year from teaching, researching and running social media for his department. Bloom says he pays nothing in tuition, and if he were required to pay taxes on the full amount [of tuition as if it were income], he might have to drop out of school.” (texasobserver.org, Dec. 6)

Protests against this particular tax were so powerful that the Senate dropped this provision from the bill. But these students are quite aware that the conference committee could put it back into the final version.

One outrageous provision of the Senate bill is that it opens up the Arctic National Wildlife Refuge to drilling by the oil and gas industry. This pristine area of Alaska, some 1.5 million acres, is home to abundant wildlife, including caribou and much-threatened polar bears. Pointing out this provision, two women in Pittsburgh chained themselves to the Grant Building on Dec. 4.

Over and over again, proponents of this “tax reform” bill proclaim that this is a “middle-class” tax cut — meaning it’s a cut for those near or below the average income. However, the Washington Post reports that after taking the health insurance cuts into consideration: “The effect, then, is that over the short term the federal government will be saving money on poorer Americans, even after cutting their taxes. By 2021, the CBO estimates that federal revenue will be up about $24 billion from households that earn less than $30,000 a year, even as it loses $198 billion thanks to tax cuts on those making more than $75,000 a year.”

That means poor people are paying for the billionaire and corporate tax cuts. And the workers know it, which explains why only 29 percent of the public supports this bill — less than any tax bill in history.

Why is Wall Street pressing their minions in Washington so hard to pass this shameful bill?  For decades, big business has more and more relied on automation and global production networks to lower labor costs and increase profit margins. But now they face the dead end of overproduction and a declining rate of profit. To increase profits they are driven to lower their own taxes while at the same time vastly increasing the deficit.

They will then use the existence of a large deficit as their excuse to destroy every hard-won social program starting with the New Deal passed during the 1930s depression. This includes cutting Social Security, Medicare, Medicaid, food stamps, the Children’s Health Insurance Program and so much more, while they wallow in their hoarded wealth.

The protests so far, strong as they are, are only a beginning. Millions of workers and oppressed people are waking up to what big business and their politicians have in store: one harsh austerity measure after another. By taking to the streets and disrupting “business as usual,” the workers and poor can win this fight. And will.