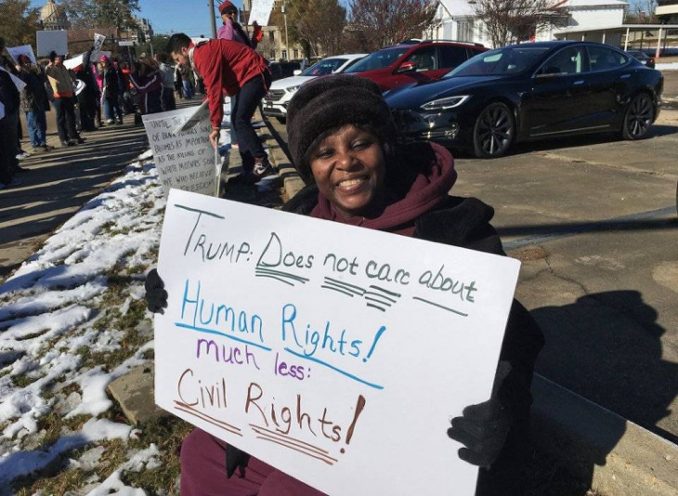 In another move in the disgusting game that is capitalist electoral politics, the racist, woman-hating, anti-immigrant, KKK-endorsed U.S. president, Donald Trump, became the first person to “tour” the Mississippi Civil Rights Museum that opened Dec. 9 in Jackson.

The state’s Republican governor was trying to use Trump’s lying double-talk authority to induce public amnesia about Mississippi’s 300-year slaughter of people of color by white supremacists. Literally whitewashing history is part of the competition among Southern “right-to-work-for-less” states to get corporations to relocate there.

But public outrage at Trump’s attendance was so intense that he could not speak at the public opening outside the museum, where he would surely have been booed and possibly disrupted. Trump had to hide out inside with a small crowd, mostly white politicos, donors, their families and carefully chosen journalists, in order to deliver brief remarks clearly scripted by someone else.

Nobody has ever heard Trump utter such phrases before: ”the oppression, cruelty and injustice inflicted on the African-American community, the fight to end slavery, to break down Jim Crow, to end segregation, to gain the right to vote, and to achieve the sacred birthright of equality here.”

Clearly not words written by a man who once inadvertently revealed he had no idea who the great abolitionist Frederick Douglass was. Nor by a man who said that the neo-Nazis who beat up anti-racists in Charlottesville, Va., and murdered one woman were “good people.”

Then this violent, despicable racist revealed off-script his ultimate disdain for the bloody sacrifice of civil rights activists who died for the right to vote. Immediately after reading out his scripted lines, he ad-libbed: “Those are very big phrases. Very big words.”

His appearance at a civil rights museum was nothing but the figleaf of a photo-op — an attempt to hide how racist to the core U.S. “democratic” politics are.

The progressive African-American mayor of Jackson, Chokwe Antar Lumumba, refused to attend the ceremony, where he would not have been allowed to speak anyway, saying: “I’m not going to be a part of a photo op.” (Jackson Free Press, Dec. 8)

U.S. Representatives Bennie G. Thompson (D-Miss.) and John Lewis (D-Ga.) also boycotted the ceremony, saying in a press release: “President Trump’s attendance and his hurtful policies are an insult to the people portrayed in this civil rights museum.” (JFP, Dec. 7) One of those civil rights veterans who spoke at the public ceremony was Myrlie Evers, the widow of martyred NAACP leader Medgar Evers, who was assassinated by white supremacist Byron De La Beckwith at their Jackson home in 1963 in front of the Evers’ children.

The life-and-death struggle for justice was condescended to and exploited by a U.S. president, who then reboarded Air Force One and flew off only one hour after touching down in Jackson.

But those still in the struggle recognized him and the white supremacists for what they are — and denounced them.

Speaking on behalf of the “direct political heirs” of the Mississippi Freedom Democratic Party that fought white supremacy, Jacqueline Amos said: “Trump has no place at a celebration of the very values and aspirations his presidency is clearly committed to destroy. Mr. President, leave Mississippi alone. We have had far too much experience with your kind already.” (JFP, Dec. 5)

Talamieka Brice, who helped organize the 200 protesters assembled along Jackson streets, was vehement: “The ideology that was the catalyst that keeps people demonizing others, that needs to be in a museum, and Donald Trump is evidence that it is not.” (New York Times, Dec. 9)

That ideology isn’t in a museum — yet. But all across the U.S. are signs of a growing struggle against the ideology that keeps demonization in place — the ideology of capitalism.

And when there is a U.S. Museum of the Revolution, then Boss Trump will be nothing but a photo moment in a historical display of how ruling-class capitalist ideology was ultimately defeated.