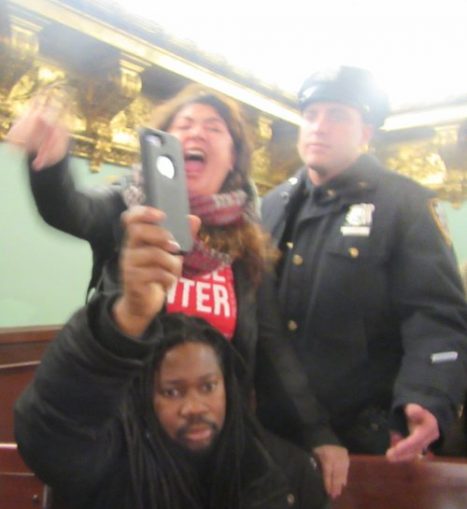 Brooklyn, N.Y., tenants against gentrification were threatened with arrest on Nov. 30 during a New York City Council meeting. Earlier, these advocates for affordable housing occupied the flight of steps leading up to New York City Hall. Two hundred tenants, members of Laborers Union Local 79 and other supporters had rallied for over an hour to demand that Brooklyn’s publicly owned Bedford Union Armory in the Crown Heights neighborhood be turned into 100 percent affordable housing.

Politicians walked by this very strong protest on their way to the council meeting, where they would soon vote against the interests of the community.

Laurie Cumbo, City Council representative for the tenants’ area, had promised during her run for office that the armory would become 100 percent affordable. But the plan Cumbo backed in the council meeting included over 150 market-rate apartments.

Not long after the protesters opposed to gentrification and displacement filled seats at the council meeting, another City Council member praised Cumbo’s armory plan. When the crowd’s demands of “Kill the deal!” rang out, people were threatened by police with removal by physical force of anyone who spoke out.

The protesters condemned any praise for Cumbo’s plan because market rate means high rents and continued displacement of poor and working-class renters. As community leader Berta Lewis of NY Communities for Change said: “[Cumbo] has no shame. She will do anything!” Lewis noted that politicians “will talk progress and walk for profit.”

The community’s strong organizing and working-class pressure over the last three years has been victorious in forcing the politicians and developers to include 250 low-income apartments in the armory plan. Only 10 percent of the projected apartments are designated for people who are homeless.

As Imani Henry, a leader in the Brooklyn Anti-gentrification Network, told WW: “What is evident and clear is that the vast majority of the City Council are Democrats, who are pro-gentrification in line with big real estate. Even the so-called progressive ones are at the bidding of big realtors.

“That there was so much police presence for our rally speaks to the fact that the council members and the de Blasio administration know what they are doing is wrong. They’re scared to death of the people, when the people of the city continue to rise against them!”