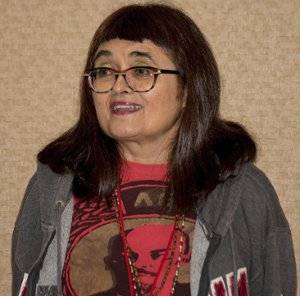 We meet on stolen Lenni-Lenape land. The history of this country is founded on lies meant to erase Indigenous nations and cultures. A great heritage has been stolen, commodified and sold to the whole capitalist world — from tobacco to tomatoes to the fringe on leather jackets.

Native nations originated chocolate, chili, potatoes, over half of the world’s foods by volume and species, sunglasses, most of the original medicinal pharmacopeia (formulary) in this country and the world’s first apartment buildings. The concept of living in harmony with the biosphere — from which we are not separate — has inspired environmental movements. The Haudenosaunee nations’ matrilineal society inspired the original feminists. All of this is part of the heritage of the Indigenous peoples of this hemisphere and their contributions to world culture.

Every Communist fighting capitalist lies has a duty to raise awareness among members of our class that Native peoples are not dead and gone. We live among you, despite smallpox, genocide and constant warfare perpetrated by colonizers and the U.S. military. From coast to coast, Native people live in urban areas and small towns, as well as on the reservations.

We discuss smashing white supremacy as part of our political work. Native people discuss the subjects of “Native Erasure” and decolonization. The term Native Erasure means leaving out Native peoples in everyday discourse, from the mass media to the educational system. Our vast heritage and contributions to the world are made to appear to come from anywhere but Native peoples.

Native people might be referred to when there is a hot struggle, like against the Dakota Access Pipeline at the Standing Rock Reservation. When our political struggles are raised and connected — and they are broadcast anywhere in the media — there are Native people listening, and they immediately note if they are left out.

Every time we speak and raise all the struggles to connect the fight against imperialist war with fights against racism at home, make sure to mention Native people, too. Keep Indigenous nations on the front burner with all of the other struggles. One way to do this is to simply recognize whose land you are standing on at the opening of every event.

The leadership of oppressed communities understands we need solidarity. Black Lives Matter of Chicago kept a presence at Standing Rock Reservation throughout the encampment. Several of the arrested water protectors will soon go to trial on serious charges. They urgently need movement support.

Let’s give a special shout out to the Ramapo Nation a few miles north of here in New Jersey. They are fighting against Native Erasure, extraction of the Earth’s resources and racism every day of their lives. Water is Life! End Native Erasure! Smash white supremacy!