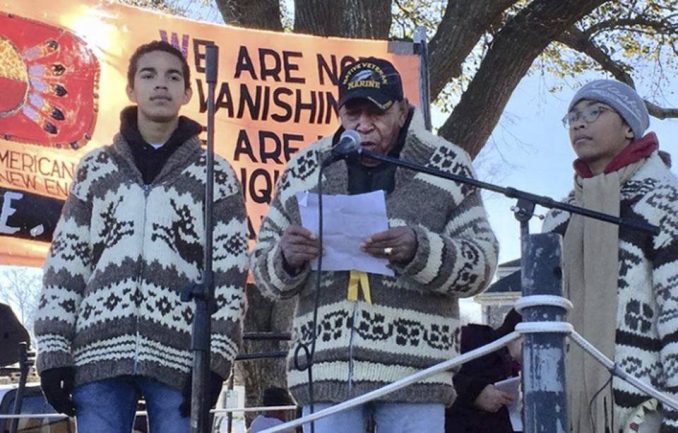 This talk was delivered at the National Day of Mourning on Nov. 23 at Cole’s Hill in Plymouth, Mass. James is co-chair of United American Indians of New England.

Once again on the fourth Thursday in November, United American Indians of New England and our supporters are gathered on this hill to observe National Day of Mourning. Today marks the 48th time we have come here in all kinds of weather to mourn our ancestors and speak the truth about our history. It has been too long a time to have to speak about the same things — to speak about racism. I dedicate this Day of Mourning to our brother, Horace Seldon, a true warrior against racism.

Those who started National Day of Mourning could not have envisioned that generations would still be here year after year carrying on this tradition. Many elders who stood on this hill and organized that first Day of Mourning are no longer with us, but we feel their spirits guiding us today.

The National Day of Mourning should always have been part of the history of this country. Forty-seven years ago, my father, an Aquinnah Wampanoag man named Wamsutta Frank James, was invited to address a gathering of so-called “dignitaries” celebrating the 350th anniversary of the pilgrims’ stumbling ashore. When asked by the dinner’s organizers to provide an advance copy of the speech he planned to deliver, Wamsutta agreed.

Within days, Wamsutta was told his words were not acceptable. Fearing the truth, the gathering’s planners told him he could speak only if he was willing to speak false words in praise of the white man. The organizers were even willing to write a speech for him. They said, “[T]he theme of the celebration is brotherhood and anything inflammatory would be out of place.”

What was it that upset those state officials? As a basis for his remarks, Wamsutta used one of their own history books, “Mourt’s Relation,” an account by pilgrims of their first year on Indigenous land.

What really happened at the first “thanksgiving” — or what some of us call the first “thanks-taking”? According to popular myth, the Indians (us) and the white folks (them) sat down and had a wonderful dinner. Everyone lived happily ever after. The end.

Plymouth is planning to celebrate 400 years of the same myth in 2020. I don’t think that anyone from UAINE, myself included, is going to be invited to address that banquet! Rest assured that no advance copy of our remarks will be sent.

Here is the truth: The first thanksgiving did not take place in 1621 when the pilgrim survivors of the first winter sat down to dinner with their Indigenous friends. The first official day of thanksgiving feasting in Massachusetts was proclaimed by Gov. John Winthrop of the Massachusetts Bay Colony in 1637. He did this to give thanks for the safe return of men from the colony who had gone to what is now Mystic, Conn., to participate in the massacre of over 700 men, women and children of the Pequot Nation.

The only true thing is that these pitiful European strangers would not have survived their first several years in “New England” were it not for the aid of the Wampanoag people. What Indigenous People got in return for this help was genocide, the theft of our lands and never-ending repression.

Another truth: The reason that the mythmakers prefer to talk about the pilgrims and not the earlier English-speaking colony in Jamestown is that there the circumstances were  too ugly to hold up as a national myth. For example, the white settlers in Jamestown turned to cannibalism to survive. Not a very nice story to tell the kids in school.

The pilgrims did not find an empty Iand any more than Columbus “discovered” anything. Every inch of this land is Indigenous. The pilgrims who called themselves “Saints” did not come here seeking religious freedom; they already had that in Holland. They came here as part of a commercial venture.

The Mayflower Compact was nothing more than a group of men sticking together to ensure that they would get a return on their investment. They introduced sexism, racism and a class system to the shores. And guess what? They did not even land at the sacred shrine down the hill called Plymouth Rock — a monument to racism and oppression which we are proud to say we buried, not once, but twice — in 1970 and in 1995.

Upon arriving, the pilgrims opened my ancestors’ graves and took funeral objects. They also took as much as they could carry of our corn and bean supplies. Massasoit, the great sachem of the Wampanoag, knew of this.  Yet he and the Wampanoag people welcomed and befriended the settlers, saving them from extinction, not knowing how many Wampanoag and other Indigenous People would be killed by their guns or die from their diseases.

Later, from the very harbor we can see from here in Plymouth, the pious pilgrims sold my ancestors as slaves for 220 shillings each. In today’s money, that would be $33, give or take.

Some would ask what we have gained by observing National Day of Mourning since 1970. The very fact that you are here is perhaps our greatest gain. People from the four directions, having seen through the pilgrim myth, join us every year in the struggle to destroy that mythology.

There are also two plaques erected by Plymouth, one on Cole’s Hill to honor Day of Mourning, and another to honor Metacom or King Philip in Post Office Square. This was part of an agreement we signed with Plymouth in 1998. Those of us who were here in 1997 will never forget what happened [when police arrested 25 peaceful protesters]. After a powerful show of unity demanding all charges be dropped, Plymouth was forced to drop the charges and erect the plaques.  At least, there are now two rocks in Plymouth that speak the truth.

‘We will protest until oppression ends’

The placement of these plaques does not end the need for us to continue to come to Plymouth and speak the truth. We will do so as long as sports teams and schools continue to use racist team names and mascots.  We will continue to gather on this hill until the U.S. military and U.S. corporations stop polluting our mother, the Earth. We will continue to stand here and protest until racism is made illegal.

We will not stop until the oppression of our Two-Spirited sisters and brothers is a thing of the past, when the homeless have homes, and when people from Mexico and Central and South America are no longer targeted. And when no person goes hungry or is left to die because they have little or no access to quality health care. Also, when union busting is a thing of the past. Until then the struggle will continue.

That first Day of Mourning in 1970 was a powerful demonstration of Native unity. Today the observance is a powerful demonstration of not only Indigenous unity, but the unity of all people who want to speak truth to power — people who want the truth to be told and want to see an end to the oppressive system brought to these shores by the pilgrim invaders.

Sadly, the conditions which prevailed in Indian Country in 1970 still prevail today. In 1970, we demanded an end to the Bureau of Indian Affairs. It is still a demand today. Native nations do not need federal oversight to govern ourselves. Why has no one ever been prosecuted for the Bureau of Indian Affairs’ outright theft of billions of dollars in trust money? Why hasn’t the stolen money been turned over to our Native nations?

Those who started Day of Mourning spoke of terrible racism and poverty. Now more than ever, we all know that racism is alive and well. Not only Indigenous People, but many people from the four directions are mired in the deepest poverty. Every winter, millions of people are forced to make a bitter choice between heating and eating.

Our youth suicide and school dropout rates and our rates of alcoholism continue to be the highest in the nation. We mourn the loss of millions of our ancestors and the devastation of our beautiful land, water and air, as we did in 1970.

What are we leaving to our children and their children? “Let us put our minds together and see what life we can make for our children.” I wish I could take credit for that statement. Those were the words of Sitting Bull.  We also pray for our people who have died during this past year and over the past 525 years since Columbus showed up.

I hope that you will join me in grieving, too, for our sisters and brothers in all countries — human beings, who are referred to by this government as “collateral damage.” Keep in mind that for centuries people throughout the Americas have been the collateral damage of the European invasion. Remember, too, the hundreds of millions of people who are hungry today, no matter where they live.

We condemn all acts of violence and terrorism perpetrated by all governments and organizations against innocent people worldwide. Since the invasion of Columbus and the rest of the Europeans, Native people have been non-stop victims of terrorism. We remember the slaughter of the Pequots at Mystic, Conn., in 1637 and the U.S. military massacres of peaceful Native people at Wounded Knee and Sand Creek, and at so many other places. The very foundations of this powerful and wealthy country are the theft of our lands, the slaughter of Native peoples, and the kidnapping and enslavement of our African sisters and brothers.

Today, on liberated territory, we will correct some history and do so in a country that continues to glorify butchers, such as Christopher Columbus, that glorifies slave-owning presidents, such as George Washington and Thomas Jefferson — and even carves their faces into the sacred Black Hills of the Lakota.

Native speakers will be our only speakers today. This is one day when we speak for ourselves without non-Native people, so-called “experts,” intervening to interpret and speak for us. Our very presence frees this land from the lies of the history books, the profiteers and the mythmakers.

In 1970, very few people would have thought about the fact that the Indigenous People of this hemisphere do not look upon the arrival of the European invaders as a reason to give thanks. Today, thousands stand with us in spirit as we commemorate the 48th National Day of Mourning.

To our beautiful Native youth, I say learn about and remember what your ancestors went through to bring you here. We are like the dirt, the sand and the tides. We shall endure. In the spirit of Crazy Horse, in the spirit of Metacom, in the spirit of Geronimo, and above all —  to all people who fight and struggle for real justice, we are not vanishing. We are not conquered. We are as strong as ever.