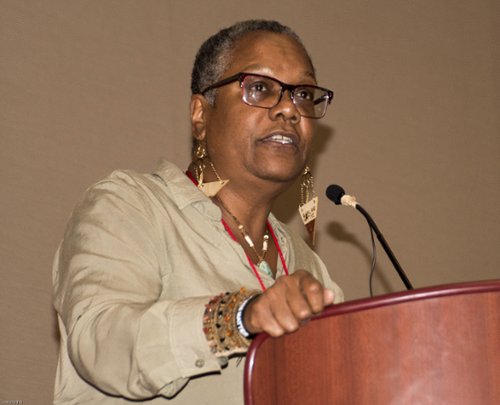 I first joined Workers World Party in 1975 due to the Party’s unique understanding that the struggle against national oppression and white supremacy can never take a back seat to fighting capitalism and imperialism in order to carry out a socialist revolution in the largest imperialist country.

Since joining the Party, I have appreciated so many other struggles. One of those is women’s liberation. When I witnessed the emergence of the women’s movement in the early 1970s as a Black teenager living in the South, I could not relate to a majority white movement that didn’t take seriously that women’s liberation for Black women is rooted in national liberation.

That all changed after my being influenced by Dotty Ballan, a Party founding member, who wrote “Feminism and Marxism.” Dotty died 25 years ago. Her pamphlet accessed what was progressive about the women’s movement, as a mass movement. And also what its narrow limitations were, especially being politically and ideologically dominated by a petty-bourgeois leadership that did not have a clue about showing class solidarity with the most oppressed women because their orientation was about reforming capitalism, not overthrowing it. We challenged this backward ideology while at the same time attempting to influence this movement by being a part of it.

Our Party had so many women leaders that, during this period, Workers World Party was referred to in the movement as “the Party of the Matriarchy.” Dotty wasn’t the only leading comrade to elevate the revolutionary potential of working-class women. Our late chairperson, Sam Marcy, wrote his groundbreaking book, “High Tech, Low Pay: A Marxist Analysis of the Changing Character of the Working Class,” over 33 years ago, where he stated this:

“Today the working class is of a thoroughgoing multinational character. … Statistics appear almost daily in the bourgeois press which show how much of the working class today is Black, Latin, Asian, Native as well as women. The most recent study shows that white males are no longer predominant in industry. The workforce is already composed of over 40 percent women. And notwithstanding the heavy Black and Latin unemployment, their percentage of the workforce continues to increase significantly.

“But what has not been pointedly brought to the attention of the public is that the working class as a whole in the U.S. has changed dramatically in another sense. The predominance of the skilled over the unskilled, of the higher paid over the lower paid, has narrowed continually. …

“In almost all of the service industries, there is a growing preponderance of new, low-paid workers. The labor force has shifted from what it was decades ago — a mostly urban white working class — to one that is of a multinational character, which does not at all enjoy the privileges which accompanied the earlier rise of the capitalist system in the U.S.”

Sam understood that this pauperization of labor that intensified with the global capitalist crisis of low wages had created the feminization of labor.

Sam explained: “The further development of the processes of capitalist production has forced many more women out of the home and into the workforce. It is these objective trends more than any subjective factors which have broken up the old family structure headed by the male breadwinner. The pauperization of labor has made it imperative that women work.”

This feminization of labor manifests itself with women workers, especially the most oppressed women, Black, Latinx and Native, being in the forefront of not only economic struggles, but also leading in political struggles. Those range from the Fight for $15 and a Union movement, to Indigenous water rights at Standing Rock, Black Lives Matter led by Black trans women, and, of course, the struggle for reproductive justice.

As an activist with the International Working Women’s Coalition, I also find there is no more important issue that impacts women — no matter their nationality, gender expression, socio-economics, youth, age or abilities — than the issue of sexual oppression: rape, assault, harassment, abuse, domestic violence.

If the current #MeToo campaign became an explosion as so many women actors exposed movie mogul Harvey Weinstein as a sexual predator, the the real catalyst was the election of white supremacist Donald Trump, with his well-known history of misogyny. Now, every day, another misogynist is being exposed, like Judge Roy Moore and Al Franken.

The #MeToo campaign has been liberating for so many women who have lived in silence and the deep-seated pain of being sexually assaulted but who now realize they are not alone. This campaign has brought widespread awareness of this war on women. There is no doubt about that.

But how can any real change be made when the voices of millions of other women haven’t been heard because of who they are, due to being marginalized and disenfranchised under capitalism?

They are migrant women who face rape and death daily by the U.S. Border Patrol when forced to flee their homeland due to imperialism. They are Black and Brown single mothers whose bosses threaten their low-wage jobs if they don’t succumb to sexual “advances.” They are women prisoners, including trans prisoners, who are sexually assaulted daily by brutal guards, or homeless women who face similar fates in shelters. They are young women who are assaulted daily in high schools and on college campuses knowing they can’t get any justice because administrations and the police are complicit when these assaults take place.

#MeToo can go only so far because it is dominated by liberals with allegiance to the Democratic Party. Struggles have to be led by the most oppressed working-class women in order for them to become more independent, anti-racist, anti-capitalist and anti-imperialist, to lay the basis for socialism which will liberate women of all nationalities.

Marx and Engels stated in “The Communist Manifesto”: “The essential conditions for the existence and for the sway of the bourgeois class is the formation and augmentation of capital; the condition for capital is wage-labour. Wage-labour rests exclusively on competition between the labourers. The advance of industry, whose involuntary promoter is the bourgeoisie, replaces the isolation of the labourers, due to competition, by the revolutionary combination, due to association. The development of Modern Industry, therefore, cuts from under its feet the very foundation on which the bourgeoisie produces and appropriates products.

“What the bourgeoisie therefore produces, above all, are its own gravediggers. Its fall and the victory of the proletariat are equally inevitable.”

And the most militant of all the gravediggers will be women. In tribute to Dotty Ballan and all women who have given their lives to the liberation of all humanity, working and oppressed women of the world unite!

We have nothing to lose our chains.  Build a Workers World!