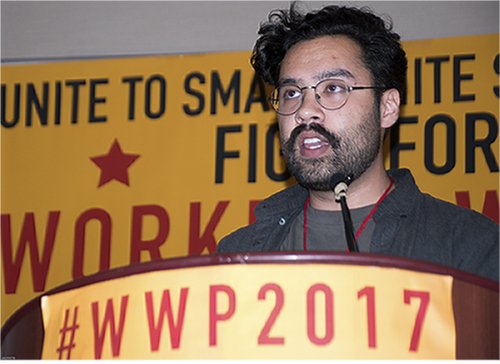 I’m from the Baltimore branch, and it’s an honor to address such an immense gathering at my very first Workers World Party conference. I’m proud to be a member of this party, especially in a time when it has never been more historically necessary.

I want to talk about why I’m here today, with this party. It’s because before I was a Marxist and a Leninist, I was an anti-imperialist. My mother came to the U.S. from the Philippines when she was seven years old. This was a result of U.S. military bases in the Philippines and soldiers being stationed there during the criminal Vietnam War. My mother’s real father died when she was too young to know him, and so my grandmother met and married a U.S. soldier. They ended up in Maryland in the late 1970s.

Growing up, I didn’t have an understanding of what it meant to be Filipino in the United States. I understood my brown-ness as a subject of ridicule. I understood the things I grew up with — the foods, the customs, my grandmother’s broken English — as things that alienated me from my peers. But I didn’t understand that there was something much more deeply rooted, much more historical, at work here.

It wasn’t until much later that I studied the Philippine-American War, which would be more aptly named the Philippine-American Genocide. Right before the turn of the 20th century, the people of the Philippines waged a courageous, anti-colonial war to defeat Spain, which had ruled them for over 300 years. Seeing the opportunity to become the new oppressor, to have unhindered access to the plentiful resources of the Philippines islands and to gain an economic foothold in the markets of East Asia, the United States swooped in and murdered a quarter million Filipino adults and children. And this was at the same time the leaders of the anti-colonial movement were building a new constitution.

To everyone in this room who’s from or descended from a colonized nation, this sounds awfully familiar. So how does this keep happening? Part of how the U.S. ruling class is able to carry out their bloodthirsty imperialist wars is manufacturing the consent of our class. The state’s capacity to do this is derived from the many tools available to it — its media, schools, prisons, police. It is able to propagandize. It is able to convince us that the people of any given nation are incapable of ruling themselves, or that they are biologically or culturally inferior. It is able to imprison or demonize people who dissent and organize. It will even deploy its CIA or FBI to wreck anti-imperialist movements, whether through toppling leaders of entire governments or sowing division inside anti-imperialist organizations.

We in this room have a great responsibility, now more than ever. In a historical period in which the ruling class’s imperialist sabers are rattling, in which this president and every president before him have put any nation that will not kneel to the U.S. in its crosshairs, we have an urgent and undeniable responsibility to show the ruling class that our class does not consent — to show that we practice international solidarity and we will not put up with the death and destruction of our class in any nation. It is our responsibility to organize ourselves and show the ruling class that there will be no peace — that we will shut shit down whenever they’re up to no good. Here, in the belly of the imperialist beast, it is our responsibility to organize our class to confront the U.S. war machine and take it down.

Workers World Party, from its very inception, has taken the position that international working-class solidarity is a priority, not just a principle. On every imperialist invasion that has happened since the founding of the party, we have taken the correct side: in defense of the oppressed nation and against U.S. imperialism. We’ve taken to the streets and shown that our class won’t rest while we are under attack.

In its search for new colonies across the earth, the U.S. must also maintain the colonies it has established here on occupied Turtle Island. We must remember the United States is itself a settler colonial state that has accomplished what it has via the extermination of Indigenous people and the enslavement of Black and African people. But this is not an aberration or particularly grotesque form of capitalism — it is capitalism carried out to its logical end. What we have here is not a broken system. It is a capitalist system working exactly as it should.

The U.S., having uprooted people from all over the world, is a prison-house of nations, in which oppressed nations and communities are segregated, policed, incarcerated and surveilled. And this is exactly why we cannot rely on politicians for the liberation of the working class and oppressed — because electoral politics are not democratic politics. Electoral politics in the U.S. are colony politics. They are the means by which the ruling class ensures the colonial domination of the workers and oppressed in the U.S. They are the means by which Democrats and Republicans, the left and right wings of the bourgeoisie, ensure the brutal exploitation and suppression of poor and working people. They are the means by which imprisonment and war remain profitable.

This is why we raise the question of liberation — because we do not fight for the representation of oppressed people in the white supremacist, settler-colonial political system. Instead, we fight for the destruction of the system that does everything in its power to suppress the self-determination of these nations and communities.

Make no mistake, the ruling class knows its time is short. Capitalism has been breathing its death rattle, having long outlived its usefulness. We know that the ruling class is scrambling for power because we see the upsurge of fascist organizations. Fascists are the ruling class’s lapdogs, the petty-bourgeoisie doing the bidding of the big capitalists: Advocating for white supremacy, deportations, genocide, crushing unions and revolutionary organizations. So here, too, Workers World Party is in the streets, confronting these fascists.

We were there for all three rounds of Charlottesville. We were there in Boston. We were there in New York. We were in plenty other places, and we’ll be there in plenty more. Having been there for two rounds of Charlottesville, it’s become clear to me that we must start taking the violence that the fascists want to inflict on us very seriously. We cannot treat “Nazi-punching” like the meme it’s turned into. It’s not quite as cute to people who’ve been hurt or seen their friends hurt by fascists. We can neither glorify nor trivialize that violence. They want to kill us, and they already have.

But fascism isn’t just here at home. It is spread abroad to carry out the will of imperialist interests, through any of the organizations armed, trained and funded by the U.S. and seeking to topple democratically elected governments in, for example, Venezuela and Syria. So however we carry out our work of smashing fascism, we must frmly maintain that there is no anti-fascism without anti-imperialism.

With this conference, among other things, we are commemorating the 100-year anniversary of the Bolshevik Revolution. The Bolsheviks conducted this revolution in the ruins of an imperialist war, rallying the Russian people behind an anti-war, anti-imperialist, pro-socialist banner.

This movement for revolutionary socialism is still alive today. Besides the socialist states that carry the torch still, there are the communist parties that are carrying out guerrilla war in India and the Philippines. We should have great hope that a red sun is on the horizon.

And then there is our movement, here, in the belly of the imperialist beast. Many who take the view that a revolution is one single, bloody, insurrectionary event can only adhere to the pessimism that a revolution is too difficult to achieve. But I would posit to you, especially when I look at this room, that the revolution has already begun. We only have to continue building it.

That is why I am filled with revolutionary optimism: We are a party that knows that a red sun will not just rise when it’s ready — we must struggle for it and yank it up by its enormous weight.

We must only remember that this does not happen without felling the beast that is U.S. capitalism and imperialism.

Comrades and friends: Take time at this conference to build with your fellow revolutionaries. Sharpen your understanding, sharpen your skills. These are part of your arsenal as a revolutionary, and you’ll need every weapon available to you.

Onwards to a red horizon.