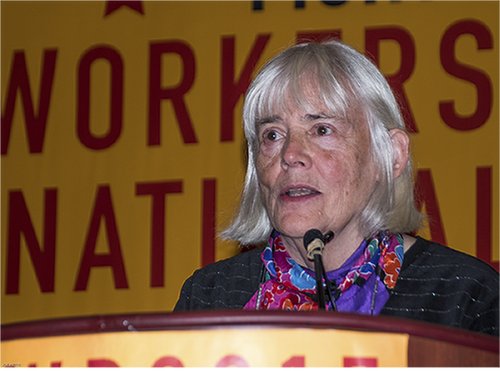 We’ve all seen that, over the past six months, the Trump administration has been obsessed with Korea. The Bully-in-Chief has even threatened a nuclear war against the Democratic People’s Republic of Korea, the socialist northern half.

Of course, it’s not just Trump. The Pentagon has been threatening the north ever since the end of World War II — more than 70 years ago!

Under both the Democrat Truman and the Republican Eisenhower, the U.S. imperialists waged a horribly destructive war against this small country from 1950 to 1953, sending almost 7 million troops, most of them draftees. More than 40,000 of those U.S. soldiers never came back.

In that war, both People’s China and the USSR supported the DPRK. A son of Mao Zedong was killed in the war — one of the million Chinese soldiers who fought on the side of the DPRK. Many millions of Koreans died, both soldiers and civilians.

Right now, the U.S. imperialists have dropped their public full-court press against Korea. Even though U.S. ships, submarines and planes continue to threaten the DPRK, the screaming headlines have tapered off.

What has happened? Well, all the bluster and threats didn’t work. The DPRK has not agreed to give up its nuclear defense. And China has not “solved the Korea problem” for Trump, as he kept saying it would.

There was so much speculation in the U.S. imperialist media that Trump would be able to drive a wedge between China and the DPRK. Indeed, China did join the U.S. in United Nations resolutions imposing sanctions on Korea, and Workers World Party doesn’t agree with that at all. As long as the U.S. maintains its huge arsenal of nukes, capable of blowing up the world many times over, those countries the imperialists target for regime change have the right to defend themselves by any means necessary!

But after Trump went to Beijing and met with Xi Jinping, all the talk about China helping the U.S. disarm the DPRK suddenly evaporated.

This is really a victory for the Korean people’s right to self-determination!

The Koreans are a distinct people who were united for thousands of years by language, culture and geography. People in both the north and south yearn for reunification. But since 1945, Korea has been divided between a capitalist south and a socialist north. How did this happen?

Let’s go back to when all Korea was invaded and colonized by imperialist Japan in 1910.

After seizing Korea, Japan became an ally of the U.S., Britain and France in World War I. Once Germany was defeated, these imperialists held a so-called Peace Conference in Paris in 1919. It was really meant to divide the spoils of war, but the conference was called in the name of “self-determination,” as defined by U.S. President Woodrow Wilson.

The great revolutionary communist leader of Korea, Kim Il Sung, wrote a fascinating autobiography called “Reminiscences with the Century.” In it he describes how bourgeois nationalists in Korea had pinned their hopes on Wilson.

“Self-determination,” wrote Kim Il Sung, “was a hypocritical slogan which the U.S. imperialists put forward in order to reduce the influence of the October Socialist Revolution [in Russia] and lord it over the rest of the world. Under the deceptive slogan, the U.S. imperialists schemed to undermine from within the multinational USSR and isolate small and weak colonial nations from one another to prevent them from uniting in the independence struggle. At the same time, they plotted to occupy the territory of the countries defeated in the war.”

For the Koreans, what this meant was a continuation of Japanese colonial rule over their country.

However, the Bolshevik Revolution of 1917 had strengthened those in the Korean movement for independence who had a class approach based on the workers and peasants. One of them was Kim Il Sung’s father.

Kim Il Sung’s autobiography describes the many ways in which the revolutionaries in China, the USSR and Korea had all collaborated in the struggle to liberate their countries from imperialism. Many Korean exiles lived in China and some in Siberia. During the 1920s and 1930s, there was much going back and forth of the cadre in these movements, sharing political views, organizing skills and military training.

By 1939, when the Second World War started, Japan had become an ally of Germany. The Soviet Union fought the fascists in both Europe and Asia. When Germany surrendered on May 7, 1945, it was just a matter of time before Japan would have to give in. Japan’s defeat was seen by all Korean patriots as the opportunity to achieve true independence.

And the Korean movement for independence by this time had been deeply influenced by both the Soviet victory and the ongoing Chinese Revolution. Those who based the struggle for national liberation on the workers and peasants eventually won out over the bourgeois nationalists.

It was a Korean communist liberation army, led by Kim Il Sung and reinforced by troops from the Soviet Red Army, that in 1945 marched into Korea from their rear bases in both China and the Soviet Union. They began to liberate the Korean working people from the Japanese colonial rulers and their Korean collaborators.

As this liberation army moved south, it was greeted with tremendous support from the masses. One of its first moves was land reform — freeing the peasants from the hated landlords. Had they been able to continue their march, all Korea would have been liberated.

But another huge imperialist power stood in the way. The U.S. ruling class was determined to pick up the pieces of Japan’s former empire, while containing the Soviet Union and sending a warning to the communists fighting to liberate China. The Truman administration rushed troops to the southern part of Korea. It was a U.S. Army colonel, Dean Rusk (who later became secretary of State), who drew a line on a map that divided Korea along the 38th parallel.

Nearly 30,000 U.S. troops are still in the south, despite much popular opposition, and the U.S. carries out massive military exercises every year threatening the socialist DPRK. In the last few years, these exercises have included thousands of troops from Japan, the hated former colonial overlord.

There is no longer a Soviet Union. However, many of the peoples in Russia, especially in the eastern part, sympathize with the socialist DPRK. And while the bourgeois elements in China may want to appease the U.S. for their own class reasons, the Communist Party leadership is not going along with Washington’s plans for regime change in Korea.

This small country has set a great example of courage in standing up to imperialism! Long live the DPRK!