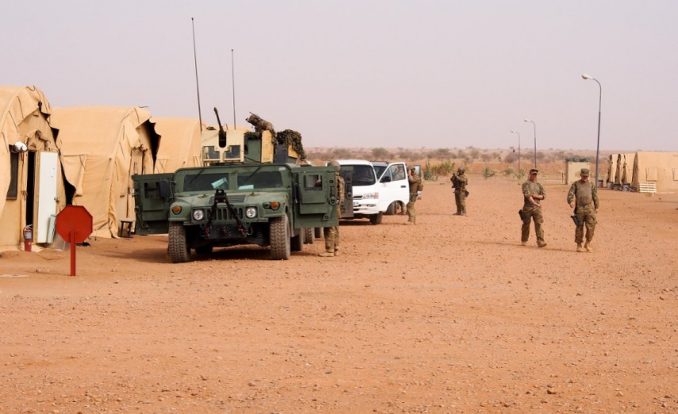 U.S. aviators from Ramstein Air Base, Germany, prepare to convoy to an airfield near Agadez, Niger, April 29, 2016.

Almost on a daily basis, the U.S. recounting of circumstances involved in the killing of four U.S. Green Berets in the West African state of Niger has shifted.

Even senior members of the U.S. Senate have stated that they had no idea that Pentagon troops were conducting offensive operations in the country. Niger, a former French colony, is ranked as the world’s fourth largest producer of uranium, a fact that has been interestingly omitted from the limited discourse on the deaths of the troops deployed under the banner of the U.S. Africa Command (AFRICOM).

A Nov. 10 report published in the Washington Post claims that the only African-American soldier in the group of dead troops, Sgt. La David Johnson, had been kidnapped and killed execution style. Purportedly, people living in the area where Johnson’s body was discovered indicated that his hands were bound behind his back and there was a gaping wound in the rear of his head.

Other reports say that the Nigerian troops, who were ostensibly on a patrol mission with the AFRICOM forces, fled while the Green Berets stood and fought the alleged assailants. Who these “hostile elements” were has still not been clearly defined. What has been mentioned is that they are somehow affiliated with ISIS (the Islamic State group). (Guardian, Nov. 4)

AFRICOM, in a statement issued on Nov. 12, said it was investigating the incident in order to report its finding to the family of the slain soldiers. Nonetheless, Johnson’s family complained about what they described as the insensitive nature of a phone call received from President Donald Trump in the aftermath of the news reports of the Green Beret’s death.

Family members of Johnson also noted that they were prohibited from viewing what was said to have been the remains of the African-American soldier. They, along with Congresswoman Frederica S. Wilson of Florida, have expressed their dissatisfaction with the response of the White House, particularly the subsequent utterances of Gen. John Kelly, administration chief of staff, who came to Trump’s defense, saying the president’s actions were appropriate.

A report published on the AFRICOM website dated Oct. 23 uses what many may consider to be racist terminology in regard to the character of Niger and other African states. This attitude was echoed by members of Congress as well as the White House.

The article, by AFRICOM writer Jim Garamone, said: “ISIS seeks to survive in the dark corners of the world where local inhabitants lack the power and expertise to control the violent group, Dunford [Pentagon chair] said. ISIS operates where it can exploit weaknesses in local government and local security forces, he added. Libya, Somalia, West Africa, certain places in Central and Southeast Asia are places where ISIS and like groups choose to operate.” (tinyurl.com/yayk82ux)

Later in this report Garamone again quotes the Chair of the Joint Chiefs of Staff, U.S. Marine Corps Gen. John Dunford: “Our soldiers are operating in Niger to build the capacity of local forces to defeat violent extremism in West Africa. Their presence is part of a global strategy.”

The article goes on: “The United States is working with nations around the world to improve their military capabilities and capacities, Dunford said. U.S. troops have been working with forces from Niger for 20 years, the general said, training more than 35,000 soldiers from the region to confront the threats of ISIS, al-Qaida and Boko Haram.”

Yet the Boko Haram insurgency, which originated in neighboring Nigeria, only began in 2009, after the country’s military attacked the headquarters of the organization in Maiduguri city in Borno state in the northern region. Prior to this, Boko Haram had largely functioned as an aboveground group focused on its own notions of the Islamic region.

ISIS arose during the last six years after the collapse of the Pentagon occupation strategy in Iraq, as Washington has sought to curtail growing Iranian influence in the region. Even al-Qaida had not been cited as an existential threat in West Africa prior to recent years. This was clearly not the case in 1997, as Dunford asserted.

Moreover, what is never addressed is the supposed strategic and security interests of the U.S. in Niger, West Africa and the continent as a whole. The presence of Pentagon military forces in Africa has rapidly grown over the last decade.

These policies have been consistently implemented through successive administrations both Republican and Democratic. The destruction of Libya, Ivory Coast and Sudan all occurred during the administration of President Barack Obama.

Obama continued to prop up the Western-oriented regime in the Horn of Africa state of Somalia, where genuine stability and security remain elusive. Constructing drone stations in Niger is part and parcel of a broader U.S. strategic plan to further dominate Africa militarily and economically.

The Sahel region of West Africa is a treasure trove of valuable minerals and other natural resources, including oil, gold, uranium and natural gas. Though U.S. military occupations are said to be based on cooperative efforts between the host governments and Washington, clearly the Pentagon represents the interests of international finance capital based on Wall Street.

Statements are made in the Western press that the intervention of AFRICOM follows the request of regional states. These governments, however, are not in any position to refuse Pentagon interference in their internal affairs. If they dare to challenge the purported authority of the White House to send special units of the U.S. military into their countries, they of course will face concerted efforts to remove their administrations from office.

Azikiwe’s article was excerpted from the Nov. 14 Ghana News.