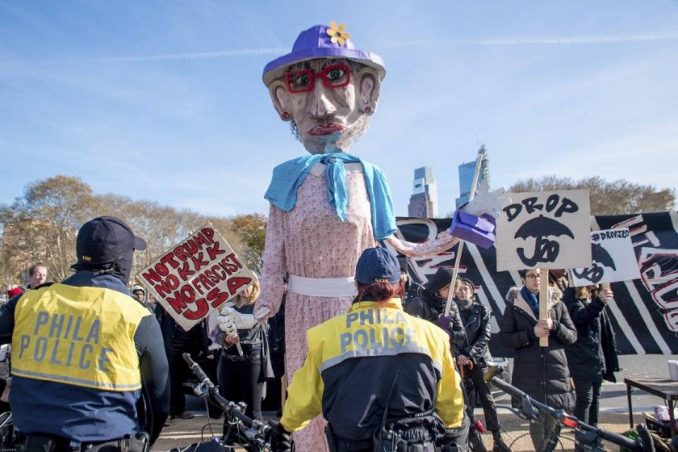 Nearly 100 people, complete with a giant Trump puppet, marched and rallied outside the Philadelphia Art Museum on Nov. 11 in support of the Philly J20 Solidarity team. Their goal was to raise public awareness about the mass arrests of more than 200 anti-Trump protesters in Washington, D.C., on Jan. 20 during counter-inaugural actions and to bolster support for defendants still facing trials later this year.

Along with the huge caricature of Trump, other puppets included a fully helmeted D.C. cop and a symbolic elderly woman protester, used in a skit during the demonstration. On reaching the Art Museum plaza, protesters were immediately confronted by police, who attempted to limit their access to a space 10 feet from the curb. The broad plaza extends over 100 feet to steps leading up to the museum.

Up Against the Law Collective members immediately challenged the protest area limit, and within minutes they produced evidence to back up their claim that the plaza was fully open to the public. As a result, dozens of yellow-jacketed bicycle cops were forced to retreat to the outer edges of the plaza.

The outlandish charges faced by people arrested for demonstrating during Trump’s inauguration mark a new level of political repression and could set a disturbing precedent for how dissent will be handled in the future. During the arrests, the police took away the arrestees’ cell phones. They subsequently raided homes and seized social media data.

Many of those arrested face eight felony charges, with potential sentences of up to 75 years. Indictments in April added additional charges, including inciting to riot, conspiracy to riot and five charges of individualized property damage.

Rally organizers noted that the U.S. Attorney’s Office is setting a repressive precedent for political expression under the Trump administration. They urged anyone who values dissent to stand in solidarity with the defendants in this case.