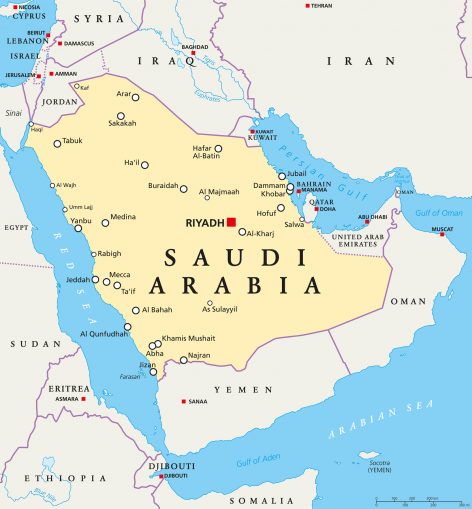 Stunning events in Saudi Arabia have stepped up the threat of a wider war in the Middle East.

The prime minister of Lebanon, Saad al-Hariri, is being held captive in the Saudi capital of Riyadh, after the Crown Prince forced him to announce his resignation. More than 200 leaders, including billionaire media moguls, 11 royal princes and several major investors, have been arrested on corruption charges and confined to a luxury hotel.

The Saudi regime, which has been waging a brutal war against the people of Yemen, declared what amounts to war against both the Hezbollah organization in Lebanon and the government of Iran, after a missile was launched from Yemen toward Riyadh. (newsweek.com, Nov. 7)

The Israeli regime under Benjamin Netanyahu has chimed in with its own war threats against Lebanon and Hezbollah, and Washington has voiced its strong approval of Saudi actions.

Crown Prince Muhammad bin Salman (MbS), nicknamed “Mr. Everything” because he controls the military, the economy and all foreign affairs, is now the apparent heir to the throne.

The Brookings Institution wrote on June 23: “The two-and-a-half-year-old war in Yemen is his signature policy initiative. The Saudis are bogged down in a quagmire with enormous consequences for the people of Yemen. For Yemenis, the war has brought mass starvation and malnutrition. Cholera has broken out. A child dies every ten minutes as a consequence of the war. Seven million people are at acute risk. The United Nations has called the crisis the worst humanitarian disaster in the world.

“And the son [MbS] is also behind the Saudi quarrel with Qatar. The Gulf Cooperation Council is broken into hostile camps. The Saudis have now produced 13 demands that would reduce Qatar to being a satellite of the kingdom.”

In early 2016, in the midst of the global oil glut that saw prices drop by more than 50 percent, MbS announced that 5 percent of Saudi Aramco, the Saudi national oil company, would be put up for sale on a major stock market using an initial public offering, or IPO.

Imperialist bankers and oil corporations were delighted at the prospect of getting a slice of ownership of Saudi oil, which the Saudi regime values at around $2 trillion. U.S. oil companies had owned Saudi oil until 1972, but by 1980, the Saudi monarchy had purchased control of all its oil facilities and reserves.

The higher the world price of oil, the more money the IPO will generate for the monarchy. But with the easing of sanctions on Iran, plus the fracking boom in the U.S., some in the Saudi kingdom obviously question the wisdom of selling a share of the country’s major asset when oil prices are low.

With the full support of U.S. imperialism, including a $350 billion arms deal with the U.S. signed last May, the Saudi regime has escalated its conflict with Iran, its major competitor. Not only has it attacked Iran-backed organizations in Yemen, it has also supplied major aid to military groups fighting the Syrian government, including ISIS. And it has tried to prevent the Iran-supported Hezbollah faction from being part of the Lebanon government. All of this is with the full support of U.S. imperialism.

But these schemes have failed. The Syrian government is on the verge of victory. The Yemeni resistance has fought off the indiscriminate bombing and blockade by the Saudi regime and even managed to construct a missile that it launched toward the Saudi capital on Nov. 4. The Saudi regime and the Pentagon both claim that the missile was Iranian-made, which the Iranian government denies.

The main Yemeni group that the Saudis are attacking is the Houthis. The Houthis’ news channel, Al-Masirah, said on Twitter: “We repeatedly affirmed that capitals of aggression states won’t be spared from our ballistic missiles in retaliation for the constant targeting of innocent civilians.” (nytimes.com, Nov. 4)

And Hezbollah is an active participant in the delicately balanced coalition government in Lebanon.

Saudi night of the long knives

In the face of all these failures, MbS decided to imprison any possible opponents, including the visiting prime minister of Lebanon and the 200 or more leaders of the Saudi kingdom.

Just before these arrests, Jared Kushner, Donald Trump’s son-in-law and a top advisor, visited Saudi Arabia and held lengthy meetings with the prince. Trump himself tweeted after the arrests: “I have great confidence in King Salman and the Crown Prince of Saudi Arabia, they know exactly what they are doing,” That was at the same time that the Saudi regime declared it was at war with both Hezbollah and Iran.

The right-wing Israeli regime is boasting of its readiness to launch a new invasion of Lebanon. “ ‘If a war breaks out in the northern arena we need to act with full force from the beginning,’ Israel’s outgoing air force commander, Maj. Gen. Amir Eshel, told a conference. ‘What we could do in 34 days during the second Lebanon war we can now do in 48 to 60 hours. The growth of our strength has not been linear.’ ” (theguardian.com, Nov. 11)

Because of imperialism’s insatiable greed for Middle Eastern oil, what ought to be a source of wealth to the people of the region has turned into the root of conflict and terrible suffering.