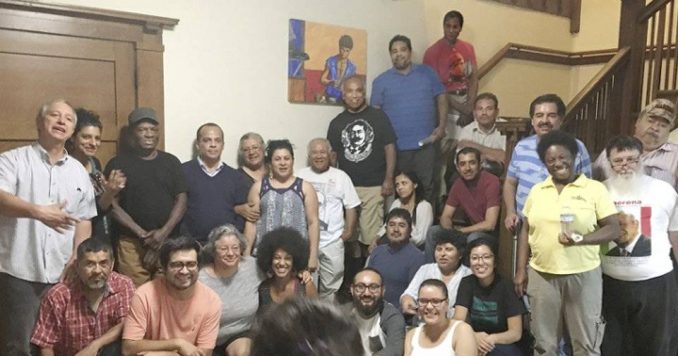 Los Angeles, Oct. 24 — Consul General of Venezuela Antonio Cordero, visiting from the Consulate in San Francisco, told an invitation-only meeting here that the Bolivarian Revolution is maintaining popular support despite the efforts of U.S. imperialism to undermine it.

Workers World Party members John Parker and Nathan Norris were at the meeting, along with organizations representing Latin and Central American liberation struggles.

Cordero listened to everyone’s questions and then answered them. He also explained about the challenges facing a country that has been under attack for the past 18 years by U.S. imperialism. The U.S. has used nongovernmental organizations and funding of the opposition while encouraging terrorism against the people of Venezuela.

Cordero added, however, that the revolution remains popular due to its continuing the work of former President Hugo Chávez. This work emphasized winning the trust of the people, prioritizing the needs of working and poor people, and building the type of social relationships in the military that are unifying and encourage loyalty to the people of Venezuela, not the elite.

He contrasted Venezuela’s military with the military in Brazil, which he said was plagued with racism. Cordero, who is Venezuelan of African ethnicity, had participated in a student exchange program with the Brazilian Air Force. He said that none of the Brazilians of African ethnicity as dark as him were able to graduate from the program, but because he was an exchange student from Venezuela he was given fairer treatment. Cordero explained that this type of racism creating divisions and mistrust does not exist in the Venezuelan military.

In addition to U.S. attacks on Venezuela, Cordero explained that the loss the government’s United Socialist Party of Venezuela (PSUV) suffered in the December 2015 elections to the National Assembly was also the result of economic problems. These were caused by a drastic drop in oil prices to as little as $20 per barrel and a drought that severely limited the generation of electricity produced by the main hydroelectric dam.

Now programs providing, for example, 1.8 million homes in just five years, a greatly improved transportation infrastructure and other pro-people policies have allowed the PSUV to achieve a qualitative victory in the July 30 elections for the Constituent Assembly and in recent regional elections.

The meeting concluded with everyone pledging to help build a movement in Los Angeles for solidarity with Venezuela.