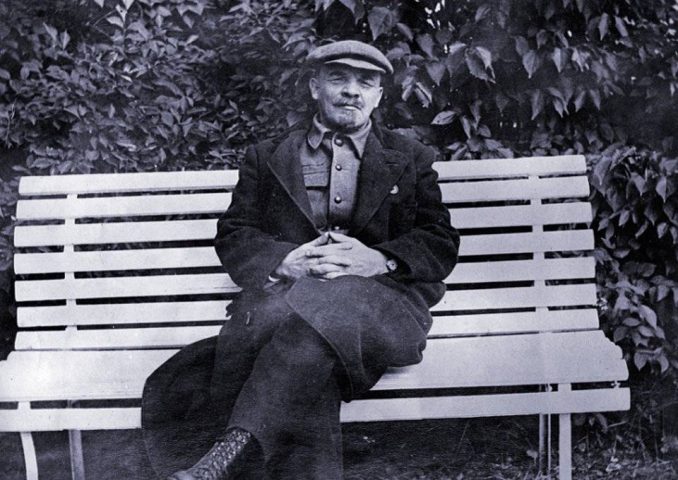 Lenin in 1923, shortly before his death.

Karl Marx was not a utopian — that is, he did not pull out of his head the concept of what an ideal society would look like.

Rather, he analyzed capitalism, as well as earlier forms of class and pre-class societies, to understand what gives rise to new social forms and the passing away of older ones.

Why did private property and the development of classes take over from the early, communal form of human society, which had existed around the globe for tens of thousands of years?

How is it that capitalist development, which has led to a spectacular increase in productivity in pursuit of profits for the ruling class, has also laid the material basis for realizing socialism? By abolishing private ownership of the means of production, socialism is the only system that can carry out plans to use the wealth created by the workers to benefit everyone.

Marx also studied revolutions as the necessary catalyst to make such a transformation possible. He wrote that people “make their own history, but they do not make it just as they please; they do not make it under circumstances chosen by themselves, but under circumstances directly encountered, given and transmitted from the past.” (The Eighteenth Brumaire of Louis Bonaparte)

What happened in Russia in 1917, and later in all the nations under the heel of the vast czarist empire, confirmed this important concept of Marx. The revolution came because of unbearable poverty and repression, but it came to the weakest of the capitalist countries, not the most advanced. While the Russian revolutionaries had counted on the revolution spreading in Europe because of the desperate conditions created by World War I, that didn’t happen. There were soldiers’ and workers’ rebellions in several European countries, but they were crushed, leaving the Bolshevik Revolution surrounded by stronger capitalist powers bent on its destruction.

V.I. Lenin, the great revolutionary thinker and fighter, recognized the terrible dangers facing the besieged Bolshevik Revolution. In a resolution for the 7th Congress of the Russian Communist Party on March 6, 1918, he wrote: “The Congress considers the only reliable guarantee of consolidation of the socialist revolution that has been victorious in Russia to be its conversion into a world working-class revolution.”

Six weeks later, in a speech to the Moscow Soviet on April 23, he said: “We are a revolutionary working-class contingent that has advanced to the forefront, not because we are better than other workers, not because the Russian proletariat is superior to the working class of other countries, but solely because we were one of the most backward countries in the world. We shall achieve final victory only when we succeed at last in conclusively smashing international imperialism which relies on the tremendous strength of its equipment and discipline.

“But we shall achieve victory only together with all the workers of other countries of the whole world. … Our backwardness has put us in the forefront, and we shall perish unless we are capable of holding out until we receive powerful support from workers who have risen in revolt in other countries.”

The Bolshevik Revolution survived for another 74 years, a testament to the enormous potential of a workers’ state, even one born out of underdevelopment and devastating imperialist war. But from the beginning it had to make concessions in order to exist.

Take the question of personnel to run the new society. In the civil war and invasion by 14 imperialist countries that followed the actual seizure of power by the Bolsheviks, the most advanced workers committed to the revolution rushed to the battle. Many never came back. They died of war wounds, epidemics and even famine. Lost were the most dedicated communists with skills, both political and practical, desperately needed to get production going again and also to win over the masses to enlightened views on women’s rights, the rights of oppressed nationalities, how to collectivize agriculture, how to take over and run the factories and other workplaces under new worker management, etc.

Sam Marcy, the founder and theoretical leader of Workers World Party, wrote on this in a pamphlet called “Soviet Socialism: Utopian or Scientific?” The Bolsheviks could not make history out of their own materials, he said, referring to Marx, but had to make do with the conditions that prevailed in Russia.

“First and foremost among these conditions,” wrote Marcy, “was that the workers’ state in the USSR only succeeded because of its alliance with the much more numerous peasantry. The alliance was correct, principled and indispensable in the overthrow of czarism. But it presented an enormous problem. The proletariat as a class is supremely interested in the socialization of property and production, which the bourgeoisie has in fact already started. But the peasants are concerned with private property, their private plots. The alliance showed its difficulties right from the start of the revolution. How to keep the loyalty of the peasants?”

“This led to the next problem. It was not a pure workers’ state in the sense that the proletariat was a majority of the population or was able to organize a new social system on its own. The truth of the matter, as Lenin, Trotsky, Bukharin and Stalin all saw and agreed, is that it was necessary to rely to a large extent on the old czarist administrative apparatus — a bitter pill to swallow. This was true even in the military sphere. Former czarist officers were recruited, even though they had to be guarded by communist civilian cadre, the commissars. …

“Relying upon elements of the old state apparatus in all fields of life held not only obvious dangers but a hidden one: These elements knew how to show eagerness and servility to the state, as in czarist times. The Communist Party, which they had previously scorned and feared — not to speak of imprisoned and banished — now could become a source of privilege if they showed support for the government and party.

“The question before the Bolsheviks was how to deal with these layers — the old bureaucracy, the officialdom, remnants of the old educated classes — who now sensing the victory of the revolution tried to find an easy entrance into it.”

How to feed the people?

During the civil war the Bolsheviks had to requisition grain from the peasants to avert an even greater famine. In 1921, shortly after the counterrevolution was finally defeated, Lenin advocated a temporary return to market relations in agriculture — the New Economic Policy — in order to stimulate food production, which had fallen to a disastrous low. It was another necessary step backward, and one that led some rich peasants, known as kulaks, to become richer while the majority remained poor.

Lenin’s death in 1924 was a terrible blow to the party and the revolution. As the acknowledged leader, he had participated in vigorous debate and discussion at every step along the way, usually, but not always, winning over the rest of the party leadership to his point of view.

Without Lenin, how to collectivize agriculture became a bone of contention in the party. To win over the poorer peasants and try to neutralize the kulaks, the government needed to supply the collectives with material support. The lives of the peasants would be vastly improved if the collectives could offer them electrification, education and less back-breaking agricultural work by providing at least horses and, even better, tractors and mechanized harvesters.

The 15th Congress of the Communist Party in 1927 resolved to proceed with collectivization at a gradual pace and let the peasants join the collectives voluntarily. Soviet industry was still only on the verge of being rationalized by the first five-year plan, which began in 1928. It was not yet producing the machinery needed to run many large-scale collectives.

But by the end of 1929, peasants were being forced to join the collectives, many of which had not yet been supplied with either horses or farm machinery. This led to resistance on their part, the slaughter of livestock and destruction of farm equipment, with many peasants abandoning the collectives. Another famine followed in the countryside in 1932-33.

Women and gay rights set back

Other setbacks occurred in this period. Legal breakthroughs won soon after the revolution regarding the rights of women and gay men were partially rolled back.

The Soviet Union had been the first country in the world to remove restrictions on divorce and abortion, as well as same-sex love. But Soviet law was changed in 1936 and again in 1944 to put restrictions on divorce in order to “strengthen the family.” A decree of July 8, 1944, also imposed a fee of at least 100 rubles to obtain a divorce. While the rationale given was concern over the fate of children, the result was to put wives more firmly under the control of their husbands.

In 1936, abortions, which had been made free on demand in 1920, were banned except in cases involving danger to the mother’s health. It became a crime for anyone to provide an abortion other than authorized doctors.

All restrictions on same-sex love had been removed just months after the 1917 revolution. But on March 7, 1934, a decree was issued criminalizing same-sex love between men and setting a punishment of up to five years of hard labor in prison.

Of course, we cannot forget that in even the most advanced capitalist countries, similar and often much more repressive laws were the norm at that time. Where they have been changed since then, it is because of the strength of the women’s and LGBTQ movements and not the enlightened goodwill of the capitalist ruling class.

These concessions to social conservatism, serious as they were, did not undo the revolution or restore the old ruling classes. In fact, they came at a time when the Soviet Union was pulling ahead in industrial production after the initiation of its first five-year plan. The capitalist world, on the other hand, was in the depths of the Great Depression, a crisis caused by the inner contradictions of the system itself.

To millions of workers and oppressed peoples around the world, the Soviet Union remained a beacon of hope. Great communist parties sprung up in both the imperialist countries and the colonies their rulers exploited. Among the latter, the parties in China, Korea and Vietnam eventually managed to carry out socialist revolutions based on both national liberation from imperialism and the struggle of the workers and peasants against class oppression and exploitation.

Even the outbreak of another disastrous world war failed to undo the 1917 Revolution. In June 1941, the Nazi regime launched Operation Barbarossa, sending 4 million German troops to invade the USSR along an 1,800-mile front. It was then, and continues to be, the largest invasion the world has ever seen.

The Germans captured 5 million Red Army troops in the war that followed. A majority of these POWs never returned alive. The Nazis deliberately starved and killed 3.3 million prisoners, as well as a huge number of civilians, through their “Hunger Plan,” intended to replace the Slavic peoples with German settlers. Nazi death squads and gassing operations also murdered over a million Soviet Jews.

But the enormous heroism of the Soviet people in defending the gains of their revolution won the day. The war in Europe ended with soldiers of the Red Army planting the hammer-and-sickle flag on the roof of the Reichstag in Berlin.

Next: Revolution in the belly of the beast?