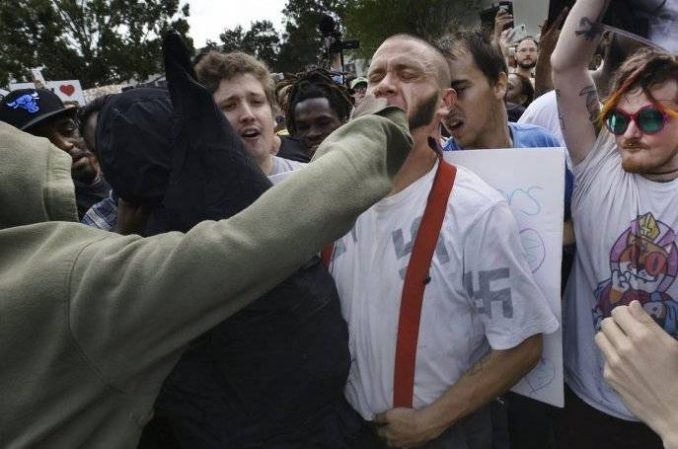 Pensacola, Fla. — Nazi and white supremacist leader Richard Spencer descended Oct. 19 on Gainesville, Fla., to the University of Florida, in his first campus appearance since he and other fascists participated in the “Unite the Right” rally in Charlottesville, Va., back in August.

Their extreme-right bigotry led to violence against oppressed people, like the beating of DeAndre Harris, a Black man who is now being arrested and charged for trying to defend himself, and also to the death of Heather Heyer, an anti-fascist protester who was struck and killed by white supremacist James Alex Fields Jr., using his car as a weapon.

The anticipation behind Spencer speaking at UF has been building for months. The university had initially denied him permission to speak there, citing safety concerns after the Charlottesville gathering. But after facing legal threats, the school gave him permission to rent space. UF is a public university, meaning that anyone has the legal right to speak on the campus. But the UF administration attempted to distance itself from Spencer’s politics and presence, even releasing a message from UF President W. Kent Fuchs, who denounced the speech as “abhorrent.”

Spencer was scheduled to take the stage at 2:45 p.m. EDT, and was immediately met with hundreds of anti-fascist protesters who shouted him down repeatedly. These protesters inside were backed by thousands positioned outside who were going toe-to-toe with white supremacists who had shown up to support Spencer. One unidentified Nazi was punched in the face, and a few others sustained injuries.

Spencer at first said that he would “stay there all day” spewing his vile rhetoric, but at the end of it all, he cut his speech short, having barely gotten a chance to speak due to the consistent booing and chanting of the crowds inside. Though there were Spencer supporters there, they were in fewer numbers and easily overpowered. Eventually, the UF campus was taken back by anti-fascist protesters.

Neo-Nazis are planning a rally in middle Tennessee later in October, and seem to be shopping around for locations, especially in the South, where they feel the police will “keep counterprotesters back,” according to one white supremacist quoted in USA Today. (Oct. 11)

We must look to the incident at the University of Florida as a reminder of how to handle Nazis and white supremacists who feel they deserve a platform. We must take away their platform and see that they do not get it back.