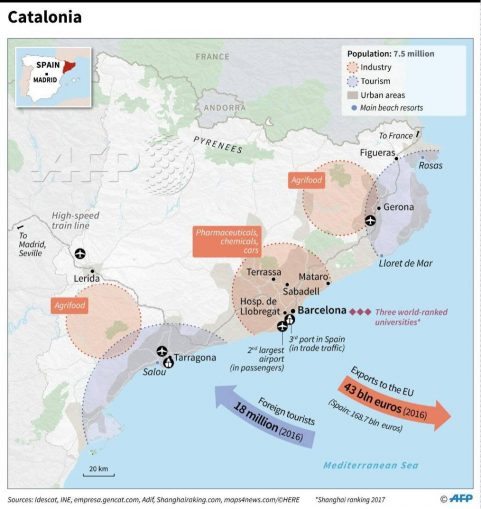 Oct. 23 — In response to the arrest of two Catalonian political leaders by the Spanish state and to Spanish Prime Minister Mariano Rajoy’s announcement that the central regime would depose Catalonia’s regional government, 450,000 people took to the streets of Barcelona in protest on Oct. 21.

Rajoy, who leads the Popular Party (PP), the most right-wing of the parliamentary parties, said he would apply Article 155 of the Spanish Constitution. This means seizing control of Catalonia, including its economy, telecommunications, radio, television, police and infrastructure, and imposing new elections in Catalonia within six months.

The federal Senate, set to meet on Oct. 27, must authorize Article 155. The PP, along with the center-right Citizens party and the so-called Socialists (PSOE), are expected to join in authorizing Article 155. Since the PP in Catalonia won only 8.5 percent of the vote in the regional parliamentary elections, this would impose, in effect, a minority regime on the region’s 7.5 million people.

Catalonia’s regional leader Carles Puigdemont, the head of the major bourgeois party currently promoting independence for the region, called a meeting of Parliament for Oct. 26. He says the Catalan government will then call for independence.

Should this go forward, there could be a showdown on Oct. 27,  which would involve the federal state using force against Catalonia’s struggle for self-determination.

The last outpouring of state force against Catalans, when federal police tried to stop the Oct. 1 referendum on self-determination, led to a massive outpouring of Catalans, angry at the attempt to crush their rights. While the overall movement was led by bourgeois parties, leftists were active in broad-based Committees to Defend the Republic (CDRs) that organized and protected the voting places.

Of the 2.3 million who voted, 40 percent of total voters, more than 90 percent opted for independence from the Spanish state.

What does Spain consist of?

The Spanish state rules over different peoples, not all of whom consider themselves Spanish. In particular, the peoples of Galicia in the northwest, the Basque Country in the north and Catalonia in the northeast have their own languages and cultures. In each of these regions there have been significant independence movements.

After fascist Francisco Franco’s military rebels won the civil war in 1940, his regime imposed a brutal rule on all these peoples, outlawing local languages and crushing by force the workers’ movements throughout the Spanish state and any movement for self-determination.

Following Franco’s death in 1975, a new regime was established in 1978 called the “Transition.” Left-wing parties were legalized and allowed to run for Parliament. A certain amount of autonomy, which eventually included language rights, was allowed to the regions.

The rule of big capital remained. The old Falangist fascists remained in the police and army and in the judiciary, and its politicians formed the PP, which has alternated ruling the regime with the PSOE. A king was imposed on everyone.

In the Basque Country, where the independence movement was broad and revolutionary, the central regime used brutal force to repress it.

Currently, the Spanish state is part of the imperialist world, a member of NATO and the European Union. The EU and world imperialism in general, up to now, support the central government against the Catalans, despite the pro-capitalist leadership in Catalonia.

Following the 2008 worldwide capitalist crisis, all the regions of the Spanish state were hit by economic collapse. There is still more than 20 percent unemployment and nearly 50 percent youth unemployment. While Catalonia has recovered somewhat better than other regions, unemployment is still at 17 percent. The economic collapse accentuated tensions among the different nationalities as well as between the workers and bosses in each region.

“The massive mobilization of the Catalan people — as in other times and in other ways, that of the Basque people — despite its determination and involvement of hundreds of thousands of people, has been unable to achieve its objectives of self-determination, but it has served to make it impossible for the structures of the state, which were built on the backbone of Francoism, to be capable of responding to political demands with anything other than repression. Likewise, the Catalan process — like any major struggle against hegemony — has engendered a major process of popular organization, around the CDRs, which should remain in place.”

That is, the CDRs could provide a structure for truly popular resistance in Catalonia and inspire struggle among the other peoples to the regime in Madrid that has been running the Spanish state since the Transition of 1978.