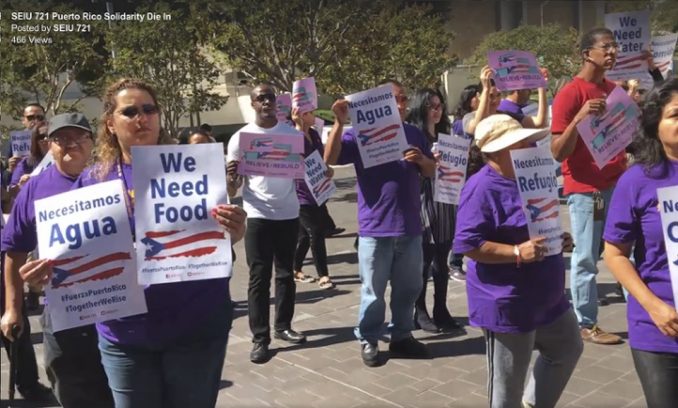 The Latino Caucus of Service Employees Union (SEIU) Local 721 held a rally and “die-in” Oct. 5 to protest the genocidal-like neglect of the U.S. government against the people of Puerto Rico who are suffering from the effects of Hurricane Maria. The suffering is compounded by the Trump administration’s sabotage of relief efforts and denial of assistance offered by other countries such as Cuba.

Lawrence Reyes, an SEIU Latino Caucus member as well as a member of the Puerto Rican Alliance, was one of the key organizers of the event. Reyes told Workers World, “We know that the reason Puerto Ricans are being neglected in the USA is because most Puerto Ricans are Indigenous, Black or Brown and also because they are subjects of U.S. colonialism. So, as a result they are not respected, have no economic sovereignty and have been blocked by the Jones Act.”

Like many progressive people and organizations that have held protests and given aid in solidarity, SEIU and other unions were quick to respond to the recovery effort. “The SEIU Latino Caucus International Conference got together in New York City on Sept. 28,” said Reyes, “and representation from Puerto Rico was not there because of the disaster of Hurricane Maria. All the locals that were represented there raised $100,000 in 15 minutes for disaster relief, with other unions donating as well. It was an international effort.”