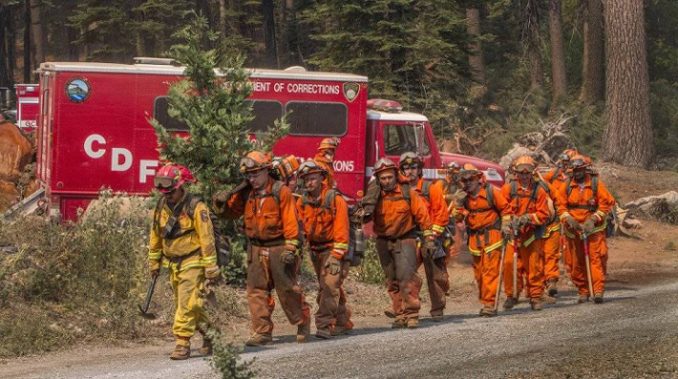 Prisoners from California Dept. of Corrections going onto a shift to fight recent wildfires.

At least 40 people have died from some 16 wildfires ripping through California, as of Oct. 16. This is the highest death toll from wildfires in the state’s history. More than 200 people are missing, and the death toll is expected to rise. More than 5,700 homes and other buildings have been destroyed, with more than 214,000 acres burned.

Nearly all of those who died were elderly and asleep in their homes. The fires in the worst hit areas, the Sonoma and Napa valleys in northern California, began in the middle of the night on Oct. 8.

When asked why people in the communities were not notified sooner of the approaching firestorms, authorities said they did not want to create panic that might clog the highways.

One can only contrast this response with the measures taken by socialist Cuba, where emergency evacuation routes and buildings are carefully prepared and announced beforehand, and where neighborhood committees take responsibility to evacuate the people, particularly those who need special assistance.

More than 90,000 Californians have been forced from their homes. In the city of Santa Rosa in the Sonoma Valley, 3,000 homes have been destroyed, with more than $1.2 billion in damage so far. The fire has created a homeless crisis where housing was already limited.

The heavy, choking stench of smoke has reached all the way to San Francisco, more than 50 miles away.

Of the 10,000 workers battling the fires in California, some 3,800 are prisoner “volunteers,” more than 200 of whom are women. In return for performing the extremely strenuous task of clearing brush to create fire lines, the inmates receive the paltry sum of a dollar an hour, plus an extra day of “good time,” reducing their sentences, for each day they work.

“It’s been quite a while since I can remember that we have had this many fires moving this fast,” said Bill Sessa, spokesperson for the Department of Corrections. “Crews often work 24 straight hours and then get 24 hours of rest. This firestorm — we had crews that worked 72 straight hours.” (cnn.com, Oct. 13)

‘The world is currently on fire’

The California fires come just after some 1,903 fires burned in Oregon in September, destroying 1,060 square miles, an area the size of Rhode Island. At least $340 million was spent battling those blazes. (statesmanjournal.com, Sept. 23)

These terrible fires are not an anomaly. An Aug. 4 article in Popular Science, published before the latest California blazes, states: “The world is currently on fire. Massive blazes burn in the United States, Canada, Russia, South America, and across Europe.

“Here in the United States the Forest Service is reporting that 2017 is shaping up to be a worse than average fire year based on acres of federal, private and state land burned. So far, 5.6 million acres of land has burned this year, or 1.8 million acres more than the ten-year average of 3.8 million acres burned by this time,” the article continued.

Wildfires are a force of nature, like the powerful hurricanes Harvey, Irma and Maria that devastated Caribbean islands like Puerto Rico, the Virgin Islands and Cuba, as well as parts of Texas and Florida. But the scientific community agrees that the extent and ferocity of wildfires, just like hurricanes, have recently increased greatly because of global warming.

California underwent a winter and spring of record snowfall and rainfall, generating a huge growth of grasses and brush. Then it endured the hottest summer on record, turning the underbrush into a vast tinder box.

California has a large number of environmental activists, many of whom have waged powerful campaigns against industries that are huge sources of carbon emissions.

But those same companies, in their insatiable thirst for profits, have given the reins of political power to the Trump regime, which aims to overturn every bit of progress the environmental movement has won, both inside and outside the U.S.

Only the combined force of the workers and oppressed communities can stop these corporate parasites from turning the planet into a wasteland and threatening the lives and livelihoods of the people. Only by converting to a system based on planning and human benefit, rather than profit, can this threat be overcome.